In this column, I'd like to put that claim under the microscope and see if it checks out.

Check out the following slide from Intel: 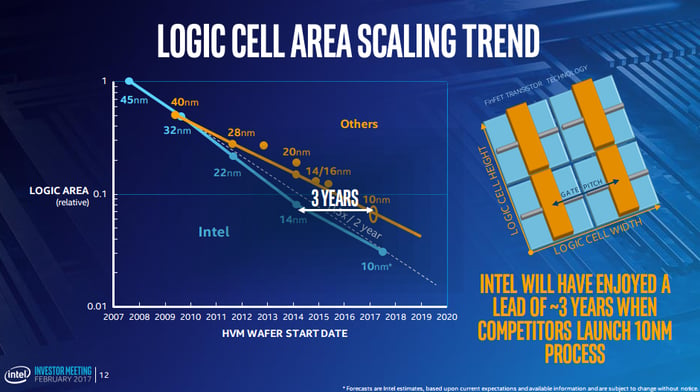 The focus of this presentation was on a metric that Intel calls "effective logic cell area" -- essentially, the lower the number, the better.

During his presentation, Renduchintala also indicated that he expects that Intel will "continue to maintain a three-year lead, even after [Intel's] competitors release their 10-nanometer plans during the course of this year."

At this point, I'm struggling to see how Intel can justify its claim that, in terms of logic-cell density, it will be able to maintain a three-year lead over TSMC, as it looks as though Intel's lead will shrink generation over generation.

Intel is expected to do a full day's worth of presentations related to chip-manufacturing technology at some point in the first half of this year. I hope the company will provide more detail about its future technology plans -- both 10-nanometer and 7-nanometer -- as well as, perhaps, a more detailed and comprehensive competitive comparison.