What is a Skechers concept store?

Skechers concept stores play a key role in the company's operating strategy. These stores are located in marquee locations -- major tourist areas or key shopping malls in metropolitan cities -- to get the most traffic and "maximum marketing value". These stores showcase the entire Skechers product line, and are a testing ground for new marketing campaigns and products. Skechers uses customer feedback and product sales data from these stores to adjust new product rollouts and marketing campaigns. The benefits to the company's supply chain is explained in the company's annual report:

We believe that product sell-through information and rapid customer feedback derived from our concept stores enables our design, sales, merchandising and production staff to respond to market changes and new product introductions. Such responses serve to augment sales and limit our inventory markdowns and customer returns and allowances.

Although Skechers concept store sales are reported in the retail segment, the product sales data these stores provide informs and facilitates its international wholesale segment growth. 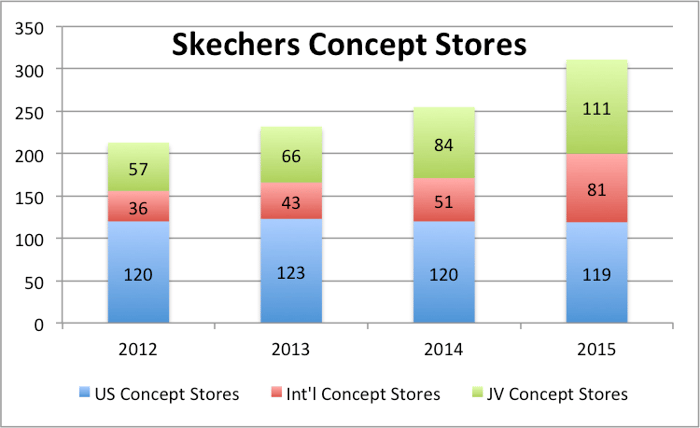 The growth in international concept stores has helped Skechers international wholesale segment sales triple from $432 million in 2012 to $1.3 billion in 2016. With stores in over 160 countries and territories internationally, it is critically important that Skechers understand product demand down to the regional level to have the right products in stock and reduce the chance for product markdowns. The concept stores do exactly that. Skechers states in its most recent 10-K that "sales in our concept stores can also help forecast sales in national retail stores, and we share this sales information with our wholesale customers." Additionally, this helps Skechers ensure it has the right "in-stock" inventory to fulfill customer orders quickly.

With all this growth from its international business in the last 5 years, will Skechers continue to grow internationally? The answer is definitely yes.

We expect international to be 50% of our total sales this year [2017] as we believe it continues to represent the most significant growth opportunity for the company.