The outlook for one of Royal Gold, Inc's (NASDAQ:RGLD) key gold mine investments was bleak at the start of 2016, and the gold and silver streaming company has worked with partners to fix that. But there weren't any other big deals last year. Which means Royal Gold has just one big thing to prove in 2017. Read on to learn more.

Royal Gold inked a number of material steaming deals in 2015, including a combined $1.1 billion (or so) in a pair of agreements with Barrick Gold (NYSE:GOLD) and Teck Resources (NYSE:TECK). Both miners were struggling under the weight of weak commodity prices at that point and looking for ways to raise cash, and Royal Gold was happy to add such well-established partners to the fold.

Deals like these were a key factor in Royal Gold's huge 36% gold equivalent ounces volume increase in fiscal 2016. This is actually a testament to the company's discipline: it waited until miners were really struggling before it jumped in to seal some big deals with industry leading names.

In fact, the big deal for 2016 was the streaming company supporting Centerra Gold's (OTC:CAGDF) acquisition of Thompson Creek Metals Company, placing Royal Gold's largest mining investment, the Mount Milligan Mine, in stronger financial hands. To be sure, this was an important deal. However, it required Royal Gold reducing its gold stream from roughly 52% to 35%. Making up the difference will be a new copper stream of nearly 19%. The deal is expected to be neutral to Royal Gold's results over the long term, but in the end there's still less gold coming Royal Gold's way in the future from this important property... 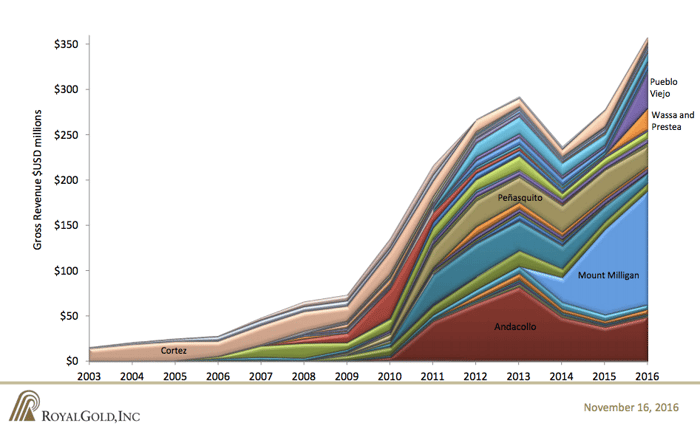 So the first and most important thing for investors to keep in mind for 2017 is that the big growth burst is over. The company is calling for 8% volume growth over the next few years, on average. If you were looking for another 30% plus pop, you'll be sorely disappointed.

That said, the 8% number is built on production growth at existing portfolio properties. In 2017 Royal Gold has to prove it made the right investments and chose the right partners to live up to that guidance.

To meet the 8% number, the company's partners will have to successfully complete expansions at operating mines and make material progress in the development of new mines. You'll specifically want to keep a close eye on Royal Gold's Rainy River and Cortex investments, two key properties that provide material support to the company's growth expectations. 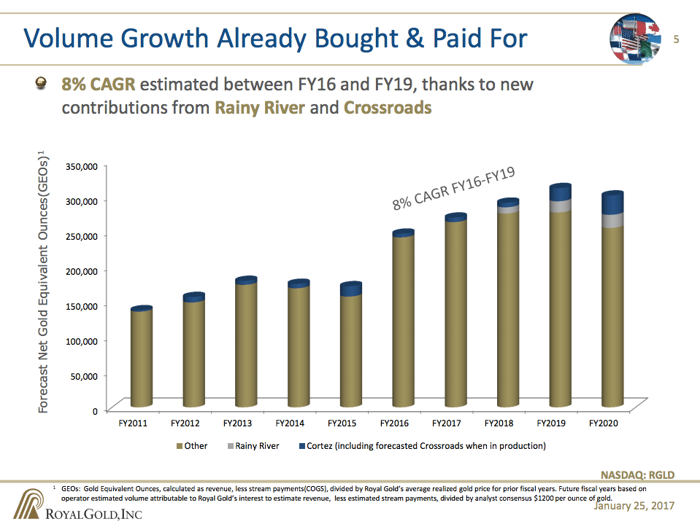 The problem is that Royal Gold doesn't get involved in the mining end of things. So it's all about finding the right partners. The workout needed at the Mount Milligan Mine isn't exactly an encouraging sign, even though it appears to be a unique event. In other words, despite a very long history of success, you should still be paying extra attention today to ensure that Royal Gold lives up to its more modest growth projections this year. What you are specifically looking for are positive updates on the projects that are on the drawing board or actively being worked on.

Royal Gold had a relatively good year in 2016, with the notable success of ensuring that the Mount Milligan mine found its way into stronger financial hands. However, it didn't make any material investments in new streaming agreements. That means the precious metals company's growth depends on expansion at existing mine investments and success at development projects.

If either of those don't work out as planned, the company's 8% volume growth forecast could prove overly optimistic. The company, meanwhile, is highlighting that this growth is "bought and paid for," with development activity adding ounces with "no incremental capital cost." It has to prove that it can live up to those promises in 2017 by providing encouraging updates on the progress its partners are making.