Retirees should generally invest in companies with wide moats and solid dividends. In a previous article, I noted that AT&T and Unilever were easy-to-understand companies that were ideal for most retirement portfolios. Today, I'll add two more companies to that list -- alcoholic beverage giants Diageo (NYSE:DEO) and Anheuser-Busch InBev (NYSE:BUD).

Diageo's massive portfolio of iconic alcoholic beverages includes Johnnie Walker, Smirnoff, Captain Morgan, Baileys, Tanqueray, and Guinness. The company is based in London, but it produces its drinks at over 200 sites in 30 countries.

Those drinks are shipped to over 180 countries, which are divided into 21 key markets. Diageo's beer business has posted soft growth in recent quarters due to competition from craft and local brands, but that weakness has been offset by robust growth across its spirits portfolio. 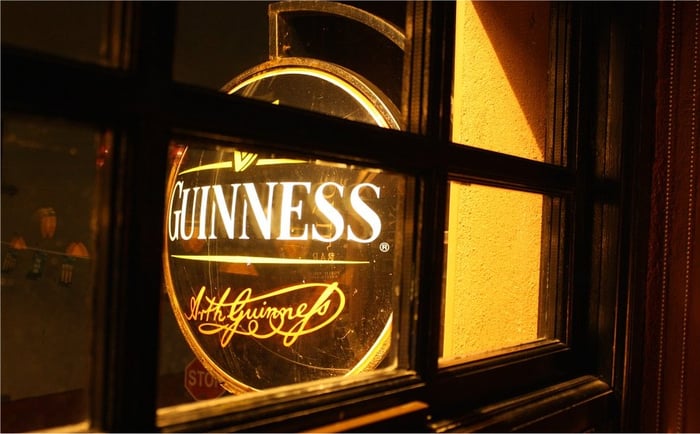 Diageo's revenue rose 14.5% annually in the first half of fiscal 2017. That growth was mainly attributed to Brexit concerns crushing the pound -- which helps U.K.-based companies like Diageo that generate most of their revenue overseas. On an organic basis -- which excludes currency impacts, divestments, and acquisitions -- Diageo's revenue rose 4.4% on 1.8% volume growth. Its "pre-exceptional" (adjusted) earnings rose 21% during the period.

For the full year, Diageo's reported revenue is expected to rise 14%, while its earnings are expected to improve 18%. That solid growth will generate plenty of free cash to fund its dividend.

Diageo only pays its dividend semi-annually, but it's raised it every year for almost two decades. It currently pays a 2.7% yield, which is easily supported by its payout ratio of 38%. Diageo currently trades at 24 times earnings, which is higher than the industry average of 19, but that slight premium is arguably justified by its double-digit growth rates.

Anheuser-Busch InBev, the world's largest brewer, was created from the mergers between Interbrew in Belgium, AmBev in Brazil, Anheuser-Busch in the U.S., and SABMiller in London. Its top brands include Budweiser, Michelob, Stella Artois, Foster's, Cass, and Hoegaarden. The Belgium-based company controls about 28% of the global beer market, according to research firm EuroMonitor International. 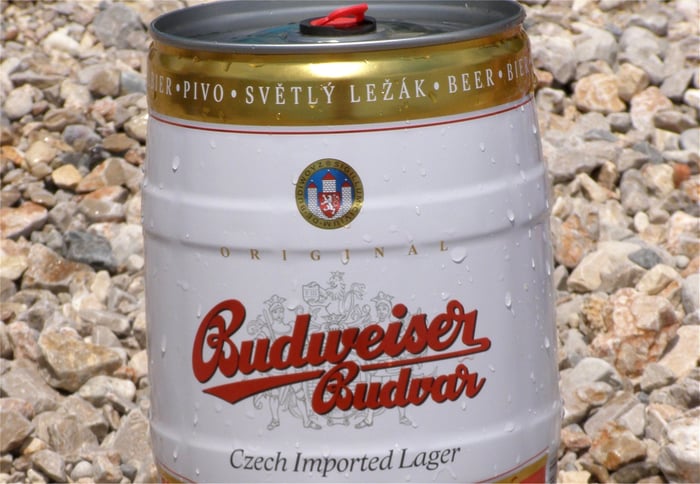 AB InBev's quarterly revenues have notably slipped annually in recent quarters due to currency headwinds and tough macro challenges in inflation-rattled markets like Brazil. During the third quarter, AB InBev's revenue rose 3% annually as revenue management and "premiumization" initiatives partly offset its softness in Brazil. However, its normalized EPS (adjusted for the SABMiller acquisition) still fell 19% due to those challenges. Looking ahead, analysts expect AB InBev's revenue to rise 6% this year, but for its earnings to decline 35%.

That outlook seems bleak, but macro issues are cyclical, and the acquisition of SABMiller will reduce the weight of troubled markets like Brazil on AB InBev's top line. That's why analysts believe that AB InBev's revenue and earnings will improve 24% and 44%, respectively, in fiscal 2017.

AB InBev pays semi-annual dividends, and it currently pays a forward yield of 3.3%. Its payout ratio currently exceeds 100% due to the SABMiller merger, but InBev has raised its dividends for seven straight years. The stock trades at 22 times earnings, which is higher than the industry average of eight, but that premium could be justified by the company's long-term dominance of the brewery industry.

Should you buy Diageo or AB InBev?

I believe that Diageo and AB InBev are both solid retirement plays that have wide moats, well-diversified businesses, and reliable dividends. Neither company is a fast grower, but both companies will likely grow larger over the next few years as they gobble up smaller players in alcoholic beverages.

However, retirees who require more frequent payments than Diageo and AB InBev's semi-annual payments should also check out stocks that pay out dividends every quarter or month instead.