Shopify (NYSE:SHOP) just finished up a stellar 2016, with revenue growing 90%. The company remains unprofitable, even on a non-GAAP basis, as it invested heavily in growing the top line. Investors shouldn't expect anything too different in 2017, although management did stick to its guns about showing profitability in the fourth quarter this year. According to Shopify CFO Russ Jones:

We invested heavily in 2016, and we saw some amazing results. We are entering 2017 with twice as many employees, thousands of additional partners, tens of thousands of new merchants, a stronger leadership position, and a market opportunity that is even greater than it was a year ago. As a result, we expect to be even busier in 2017.

There are three main areas of investment for Shopify this year: product, growing the customer base, and Shopify Plus. Let's take a closer look at Shopify's plans for all three. 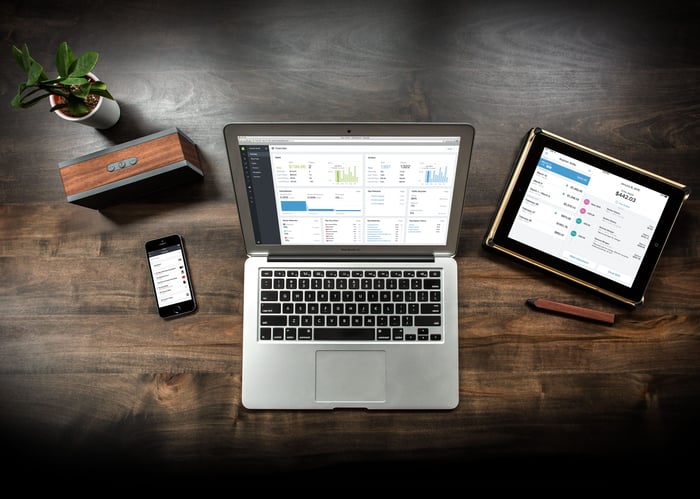 Shopify already has a best-in-class product, but it's more susceptible to competition as a software platform than a company with more of a hardware presence, like Square (NYSE:SQ), for example. As such, it plans to continue investing in product innovations to ensure the customers it has stick around.

Management plans to make Shopify even easier to use to build an online store. That means better tools and a more robust application programming interface, or API. Giving merchants more options for putting together their web presence, or an app, can drive higher gross-merchandise volume, more merchants, and better retention.

Additionally, Shopify plans to leverage its troves of transaction data to create product improvements. Shopify plans to find ways to provide merchants with more data, so they can figure out the most effective sales channels and reduce the risk of chargebacks. Additionally, it can use data to make more effective loan decisions for Shopify Capital. That follows the exact model of Square's Square Capital.

Shopify will also invest in improving its cloud infrastructure to support the growing number of merchants on the platform and maintain resiliency. Minimizing any downtime is crucial to a platform like Shopify because a few minutes of downtime could be huge for the merchants it supports. Jones says the investment in infrastructure "will result in some redundant cost in 2017, [but] we expect to realize future benefits, particularly as we scale globally."

Capitalizing on the growth of e-commerce

The second area of investment for Shopify is in growing its business. More and more shoppers are spending their money online these days. E-Commerce sales in the U.S. grew to $394 billion last year, up 15% from 2015. That means retailers and other businesses need to establish an online presence, and that's a massive opportunity for Shopify.

"We would be crazy not to capitalize on the evolutionary moment in the development of retail," Jones told investors on the company's fourth-quarter earnings call.

Last year, Shopify's marketing expense grew 84%. That's an acceleration from the 53% increase in 2015. Investors should expect Shopify to keep its foot on the pedal with its marketing expenditures, as long as it's seeing a good return on investment. With a huge runway on online shopping growth, we should see elevated marketing spend in 2017, as well.

The last area of growth for Shopify is its Shopify Plus product for large enterprise customers. In 2016, Shopify expanded its customer base from 1,000 to 2,500 Shopify Plus merchants. Management expects its investments in product and growth to support the continued growth of Shopify Plus. It also brought on 100 new people to help grow the program.

Shopify made an important change to Shopify Plus pricing this year. It's going from a flat fee to a variable rate based on gross merchandise volume. Merchants selling over $10 million in merchandise per year will pay 0.25% of GMV -- anything under, and they'll pay $2,000.

Shopify's willingness to invest in the long-term growth of the company is one of the most appealing aspects of the company. The opportunity for revenue growth is too big not to keep plowing money into the company, and that's exactly what management plans to do.