We see big things ahead for this equipment distributor, oil refiner, and slimmed-down oil producer.

Oil prices haven't gotten off to the fast start many expected, falling around 6% on average during the first quarter of the year. That slump came despite OPEC's best efforts since producing nations have achieved fairly good compliance on their planned output cuts. That said, despite the lackluster oil market, we still see some interesting opportunities in the oil market. Three stocks we really like right now are DistributionNOW (DNOW -1.05%), Phillips 66 (PSX 0.45%), and ConocoPhillips (COP -1.10%), which should all do well in the current oil market.

Tyler Crowe (DistributionNOW): U.S. oil and gas production has been rearing its head lately. The total active rigs, according to Baker Hughes, has doubled since its low back in May of 2016. Putting that 400 or so idle rigs back to work will require a lot of equipment, and that makes DistributionNow an intriguing stock to check out in April. 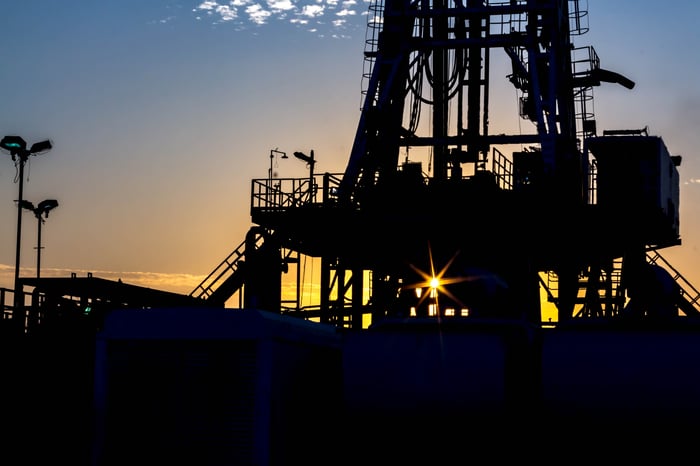 DistributionNOW -- or Now Inc., depending if you ask the corporate website or its SEC filings -- is one of the largest distributors of products for the oil and gas industry, ranging from pipes & valves to drilling & completion tools. The past several quarters have been rather tough ones for anyone in this business, but DistriubtionNOW's management has performed admirably by right-sizing the business by significantly reducing headcount and closing or consolidating 99 facilities. These have aided in preserving capital and allowed the company to remain free cash flow positive throughout the entire downturn.

Now that the North American market is picking back up again, we can reasonably estimate that it will have a profound impact on the bottom line. After all, the U.S. and Canada represent about 80% of total revenue. It's also worth mentioning that DistributionNOW has completed four acquisitions in the U.S. market over the past two years. These acquisitions and several competing companies going out of business have led to DistributionNOW gaining market share.

While the company's financials aren't looking that great lately -- distribution is a rather low margin business even when times are good -- it has more cash on hand than outstanding debt. Also, it has remained free cash flow positive despite the net income losses for eight straight quarters. Today, shares are trading at 0.8 times sales. By any measure, that is a cheap price to pay, especially when the industry is still emerging from a trough. If you are looking for a way to invest in the North American shale renaissance, DistributionNOW is worth a look.

Lots of upside, with less downside

My search for companies well-positioned for almost any energy price environment often brings me back to Phillips 66. This is in part because, while its refining segment is affected to some measure by oil prices, the company has demonstrated that it can make money in refining even when competitors struggle. This is in no small part due to the highly advanced capabilities of its refineries that give the company a lot of flexibility to process different kinds of crude oils that other refiners can't handle. That can mean lower input costs.

But that's only part of what I like about Phillips 66. Its extensive petrochemical and midstream segments are faster-growing than refining, and management can allocate capital for better returns in those businesses. This has helped Phillips 66 consistently generate some of the best returns on invested capital of any refiner: 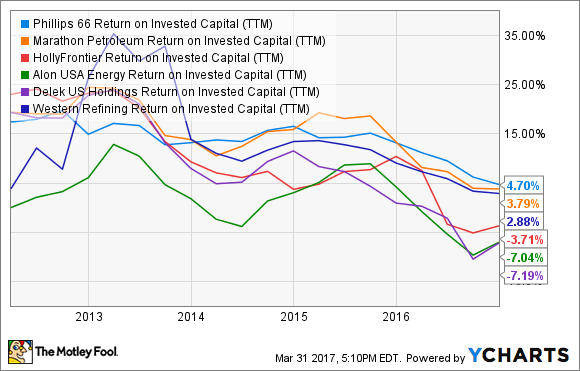 Lastly, management is committed to growing its dividend, currently yielding 3%. Throw in the 10% decline in the share price since the start of the year, and now's an excellent time to buy Phillips 66.

The catalyst to get things really going

Matt DiLallo (ConocoPhillips): U.S. oil giant ConocoPhillips recently unveiled a transformational transaction, selling a significant portion of its Canadian oil and gas assets to Cenovus Energy (CVE 0.21%) in a $13.3 billion deal. While the deal will shrink the size of the company, it also makes it a better one overall. That improvement has the potential to create tremendous value for investors in the future, making April a great month to dive in.

The biggest thing ConocoPhillips accomplished with this deal was that it dropped debt down to its ideal level of $20 billion, which comes three years ahead of schedule. That will save the company roughly $300 million of annual interest expenses, which completely offsets the lost cash flow from the divested assets. Further, because the sold assets consisted of lower margin production, ConocoPhillips' cash margins will increase by 20%. Finally, the average cost of supply in the company's portfolio will drop from $40 a barrel down to $35 per barrel.

These improvements set the company up to deliver healthy cash flow in the current oil market environment, which it intends to allocate toward a variety of priorities and create value for investors. This plan includes growing the dividend, reducing debt further, buying back stock, and investing in high-return growth projects. The company expects this formula to fuel double-digit annual returns for shareholders even if oil doesn't budge, with significant upside if crude prices improve.