Investors in bitcoin have enjoyed an incredible year. Twelve months ago, the price for one unit of the cryptocurrency stood at just a shade over $1,100. As I write, one bitcoin trades for over $10,400 -- a greater than 840% gain in just one year. Truly incredible!

However, the dramatic rise in bitcoin over the past year doesn't begin to tell the story of its volatile trading history. In late 2013, the trading price for one bitcoin was over $1,100. By January 2015, the price had plunged again, this time to under $200. Following this incredible drop, the digital monetary unit began its current meteoric rise, reaching a peak of just under $20,000 in December 2017. It then fell to under $7,000 earlier this year before recovering to its current levels near $10,000. Whew!

This instability is inherent in investing in a currency that is not backed or regulated by any national government, or based on something of tangible value, like gold. Check out this chart showing bitcoin's violently volatile rise this past year. 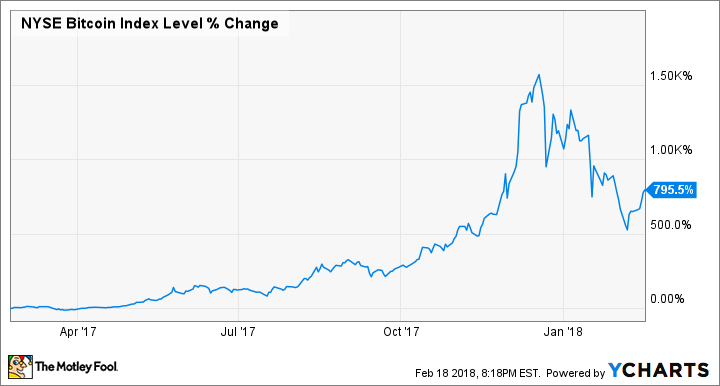 It's not just the currency's stomach-churning volatility that turns some people off from investing in bitcoin. The lack of regulation or palpable value behind the currency causes many people to consider bitcoin somewhat akin to Monopoly money. On the other hand, the blockchain technology behind bitcoin has a chance to be disruptive across so many different industries and investors might be more willing to get behind that.

Blockchain technology is essentially a publicly distributed ledger. When transactions using this technology are completed, they are recorded on the newest "block." When a block's capacity is filled, it is added to the end of the "chain" in linear order. This way of transferring money, supplies, or other assets eliminates the need for each transaction to go through various middlemen, like brokerages, payment processors, and even banks. The fewer third-parties involved in facilitating transactions, the fewer players that take a small cut.

Here are three companies that clearly see many opportunities ahead for this potentially transformative technology, and that are working to incorporate it in their respective fields. Blockchain's impact on the financial industry

Count Broadridge Financial Solutions, Inc. (NYSE:BR) CEO Rich Daly among those who see the opportunities for blockchain technology in finance. In the summer of 2016, Daly wrote in Forbes:

Some people know blockchain as the underlying technology behind the controversial digital currency Bitcoin. However, blockchain is so much more; it's incredibly innovative and its promise is far-reaching. This technology is a secure and transparent way to digitally track the ownership of assets before, during and after transactions, and it has the potential to ultimately transform everything from how stock exchanges operate to how proxies are voted.

In the same editorial quoted above, Daly lists syndicated loans as an example where blockchain technology would accomplish these goals. Syndicated loans, Daly states, currently take up to 20 days to settle in a labor-intensive process. With blockchain, the process would be much faster and would cost less in legal fees and to close.

In September 2016, Broadridge made its latest investment in this space, buying the technology assets of Inveshare, Inc. for a total of $135 million. The acquisition was for the sole purpose of accelerating Broadridge's use of blockchain technology in its proxy business.

The use of blockchain technology eliminated the need to issue paper stock certificates and "significantly" reduced the transaction's settlement time, according to Nasdaq, which believes the technology holds the same promise for stocks sold on the public markets. In the press release announcing the historic transaction, Nasdaq CEO Bob Greifeld said:

Through this initial application of blockchain technology, we begin a process that could revolutionize the core of capital markets infrastructure systems. The implications for settlement and outdated administrative functions are profound.

This isn't the only way Nasdaq has experimented with using blockchain technology. Earlier this year, the company successfully used the technology to process proxy voting on its Estonian exchange. It is now contemplating whether to use the same process for proxy voting across all of its exchanges.

Perhaps no company has more invested in blockchain technology than International Business Machines Corp. (NYSE:IBM). Earlier this year, the company launched IBM Blockchain, a platform that will enable enterprise customers to build applications in IBM's cloud using blockchain. The company believes its cloud-based blockchain offerings -- a type of blockchain-as-a-service -- will differentiate it from its many cloud competitors.

CEO Ginni Rometty believes it cannot be overestimated how important blockchain technology is to the company's future. In the company's 2016 annual letter, she stated:

Blockchain brings together shared ledgers with smart contracts to allow the secure transfer of any asset -- whether a physical asset like a shipping container, a financial asset like a bond or a digital asset like music -- across any business network. Blockchain will do for trusted transactions what the Internet did for information.

Rometty says the company is currently working with over 400 clients on blockchain initiatives. These offerings are as diverse as using the platform to work with Wal-Mart Stores to track food inventory, and with the London-based start-up Everledger to track diamonds.

Broadridge Financial, Nasdaq, and IBM are multibillion-dollar companies with many moving parts. Their futures do not hinge on blockchain technology, but each is aiming to use it in ways that will cut costs, allow for faster service, or differentiate their business services from competitors. All three companies are avenues investors can explore to gain decent exposure to blockchain technology without buying bitcoins.