The housing industry has done well in recent years, and that has helped spur greater mortgage activity. Ellie Mae (NYSE:ELLI) has aimed its business at making things easier for mortgage lenders to make, track, and monitor their mortgage loans. Users have increased efficiency and been able to handle higher volumes, but as interest rates have been heading higher, some have feared that the resulting drop in mortgage volume might prove problematic.

Coming into Thursday's first-quarter financial report, Ellie Mae investors were prepared for falling earnings, but they wanted to see solid revenue growth. The company did better than expected by some metrics, yet investors focused on questionable guidance going forward, and it sent the stock down. Let's take a closer look at Ellie Mae to see how it did and what's ahead for the mortgage software provider. 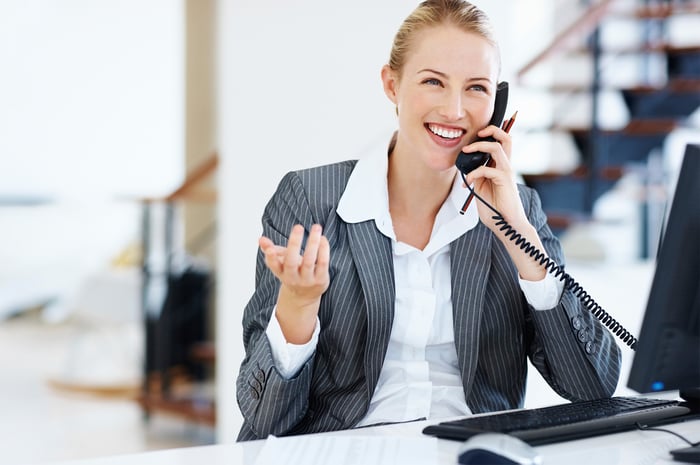 Ellie Mae's first-quarter results were solid, but didn't generate the dramatic outperformance that some investors have gotten used to seeing from the company. Revenue of $93 million was up 26% from the year-ago quarter, matching the consensus forecast among those following the stock. Net income came in at $9.6 million, nearly quadrupling from the first quarter of 2016. That produced adjusted earnings of $0.25 per share, which was $0.04 better than most investors were expecting to see.

Looking more closely at the report, Ellie Mae continued to work to get as many clients onto its mortgage-management platform as possible. The company reported 12,100 new seat bookings during the quarter, which accelerated from its growth pace in the fourth quarter of 2016. Yet Ellie Mae also chose to provide a lot less information than it has in previous quarters, omitting total active and contracted user counts and average revenue per user. Commentary on the state of the industry was limited to a general statement about weaker levels of mortgage activity broadly.

However, some of Ellie Mae's internal metrics weren't as good as they've been in the past. Gross margin fell by more than a full percentage point, to below 63%, as costs of revenues were up by more than 30%, due, in part, to the handling of stock-based compensation expenses. Both research and development and general overhead expenses were up at faster paces than Ellie Mae's revenue growth, and that kept operating margin figures roughly constant.

CEO Jonathan Corr summed up the results for Ellie Mae quite succinctly. "We had a very productive first quarter," Corr said, "and are on track for a solid year." As the CEO noted, "While industrywide mortgage volume declined by 34% from the fourth quarter, lenders of all sizes continue to see the value of our Encompass lending platform."

Ellie Mae had tangible proof of the interest in Encompass. At its recent annual user conference in Las Vegas, Ellie Mae showed off its new Connect suite of products, including modules for consumer, loan officer, developers, and third-party originations. Also, the ongoing rollout of Encompass NG and various data-driven initiatives could provide additional avenues for growth.

However, Ellie Mae's outlook didn't live up to expectations. The mortgage-software company expects revenue of between $109 million and $111 million in the second quarter, which was pretty much in line with investor expectations. However, adjusted earnings of $0.43 to $0.45 per share would be quite a bit less than the current consensus forecast for $0.53 per share. Moreover, Ellie Mae merely repeated its 2017 full-year guidance rather than improving it, and the company believes revenue will come in at $433 million to $440 million, with adjusted net income of $1.79 to $1.92 per share reflecting a tax adjustment.

Investors didn't get what they wanted from Ellie Mae's results, and the stock plunged nearly 10% in after-hours trading following the announcement. If a slowdown in mortgage activity indeed is coming, then the question Ellie Mae will have to answer is whether existing customers will start to pull the plug on the system. That's far from certain, but it will be vital for Ellie Mae to work on retention to avoid a flood of departures in the next mortgage-cycle downturn.