Sales of the Impella family of heart pumps continue to grow rapidly, driving margin improvements and big gains on the bottom line.

Cardiovascular disease is the No. 1 cause of death, and more than 735,000 Americans suffer from a heart attack each year. Helping heart attack victims to survive is a big challenge that medical device maker Abiomed (ABMD) has chosen to tackle head-on. The company's minimally invasive Impella heart pumps can be implanted in a patient's body directly after an attack to help reduce the amount of stress placed on the organ. The clinical advantages of using the Impella pump have been driving rapid adoption by healthcare providers, which in turn has allowed Abiomed's revenue and profits to soar.

Coming into Thursday morning's fiscal fourth-quarter earnings report, investors were looking for the company to post yet another quarter of strong growth on the top and bottom lines. Let's dig into the results to see if it was able to keep up with those soaring expectations. 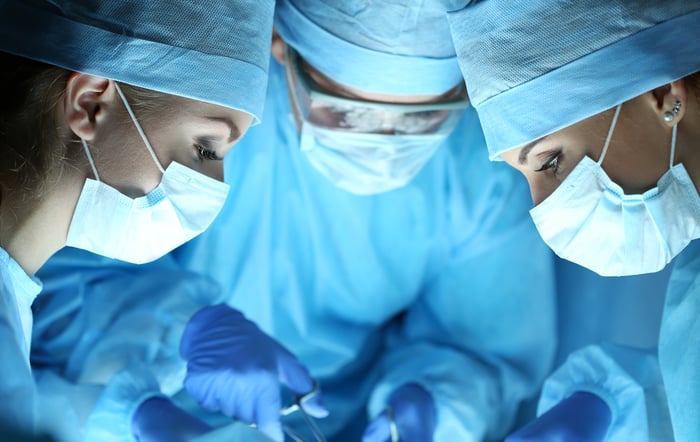 Abiomed also announced during its conference call that its newest product in its Impella family -- called the Impella RP -- was submitted for approval by the Food and Drug Administration ahead of schedule. This device is designed to provide support for the right side of the heart and management expects a go/no-go decision from the agency by October.

Zooming out to the full fiscal year 2017, here's a review of how the company's results shook out:

Abiomed CEO Michael Minogue noted that fiscal 2017 was "another successful year" in which the company received two FDA approvals, gained a regulatory clearance in Japan, and received good news from the Centers for Medicare and Medicaid Services.

Minogue also seemed particularly proud of the fact that Abiomed "remains one of the fastest growing GAAP-profitable companies."

Management believes that fiscal 2018 should be another outstanding year for Abiomed. That optimism stems from projected growth in Impella sales thanks to higher penetration rates in the U.S. and from its commercialization efforts in international markets such as Germany and Japan.

That bullishness caused management to project that revenue in the fiscal year 2018 would land between $555 million and $575 million, which represents growth of 25% to 29%. Meanwhile, operating margins are expected to expand from about 20% in fiscal 2017 to between 22% to 24% in the year ahead.

Abiomed's stock initially fell in morning trading follow this report but quickly recovered by the early afternoon. With new products on the horizon and international sales starting to ramp, shareholders appear to have plenty of reasons to remain optimistic about this company's future.