Please ensure Javascript is enabled for purposes of website accessibility
Log In Help Join The Motley Fool
Free Article Join Over 1 Million Premium Members And Get More In-Depth Stock Guidance and Research
By Rick Munarriz - May 5, 2017 at 5:58PM

This weekend's top movie will be a bigger part of Disney's theme-park landscape soon.

There's no denying that the top box-office draw this weekend will be Disney's (DIS 3.98%) Guardians of the Galaxy Vol. 2. The 2014 original raked in $330 million in domestic ticket sales and another $440 million overseas, so the sequel already has a strong built-in audience. The movie is already generating some positive buzz among movie critics and audiences alike, scoring an 82% approval rating among critics on Rotten Tomatoes and an even higher score with audiences.

Disney is no stranger to big movies. It's the studio behind most of the highest-grossing films of the past couple of years. However, this one's pretty important when it comes to Disney's theme parks. There's a new ride opening later this month bearing the Guardians of the Galaxy name in Disney's California Adventure in Anaheim later this month, and there's even greater potential for the franchise at the larger Disney World resort if the sequel is a hit. 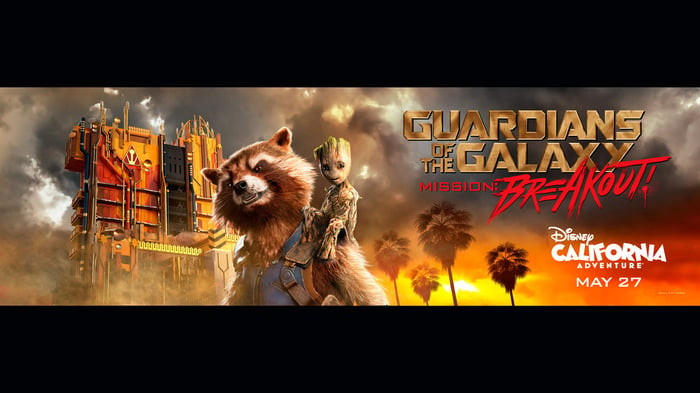 Square Groot of a faction

Guardians of the Galaxy -- Mission BREAKOUT! will open in Disneyland's Disney's California Adventure during Memorial Day weekend, replacing the Twilight Zone Tower of Terror free-fall ride. It will be the first Marvel-themed thrill ride that Disney opens in the U.S. market. The Iron Man Experience opened at Hong Kong Disneyland earlier this year.

Disney moves slow. It acquired Marvel eight years ago. When Star Wars Land opens at Disneyland and Disney World in 2019, it will come seven years after it snapped up Lucasfilm.

This month's new thrill ride will open with a fair amount of controversy, as diehard fans of the original Twilight Zone Tower of Terror are already bemoaning the superhero makeover. However, there's no denying that the booming popularity of the Guardians of the Galaxy franchise will make the new ride a big draw in California this summer, especially if this weekend's sequel is as big a blockbuster as the original.

However, the real potential to make Guardians of the Galaxy a cornerstone of a theme-park empire rests three hours away. Disney World is just dipping its feet into the campy, yet powerful, franchise. It just opened a character meet-and-greet experience where guests at Disney's Hollywood Studios in Florida can interact and take pictures with Star-Lord and Baby Groot.

This is just the beginning. There has been chatter of a Guardians of the Galaxy ride opening in Disney World's EPCOT since last year, and it makes perfect sense. Attendance growth has been sluggish at EPCOT, as the gap of turnstile clicks between that park and Disney's Magic Kingdom widens. Adding a ride that would resonate with Marvel fans would make EPCOT popular with a segment of the population that doesn't typically buy into the EPCOT experience.

Disney also doesn't have much of a choice when it comes to which franchise it should tap in fleshing out theme-park rides and attractions in Florida. Rival Comcast (CMCSA 2.10%) opened up Marvel Super Hero Island in 1999, long before Disney gobbled up Marvel. The deal gives Universal Studios -- now owned by Comcast -- exclusive theme-park rights to the X-Men, Avengers, Fantastic Four, and Spider-Man franchises east of the Mississippi. If you're wondering why Spider-Man, Wolverine, and Captain America aren't available for character greetings within Disney World, you have your answer.

Those four franchises were undeniably Marvel's biggest properties when the deal with Comcast's Universal was inked, but we've now seen Guardians of the Galaxy, Doctor Strange, and The Defenders bubble up as hot commodities. If Guardians of the Galaxy, Vol. 2 is a monster hit, then it will be just a matter of when -- not if -- Disney announces that it's moving forward with a superhero-themed expansion at a quiet corner of EPCOT's Future World.