Cal-Maine Foods (NASDAQ:CALM) reported another rough quarter back in March. The company continues to struggle in a tough hard-shell egg industry that is still trying to rebalance after the 2015 avian flu outbreak. Here are three important takeaways from management's latest prepared comments.

Eggs are getting fried

In the spring of 2015, avian flu broke out in the Midwest, devastating flocks of chickens. That caused a shortage of eggs, which in turn sent egg prices soaring.

Farms hit by the outbreak struggled, but many of those left unaffected posted record sales and profits. Cal-Maine was one of those producers. However, as the industry recovered and rebuilt its population of hens, prices went south. Cal-Maine thus suffered a quick reversal of fortune as revenue has been more than cut in half and losses mounted. 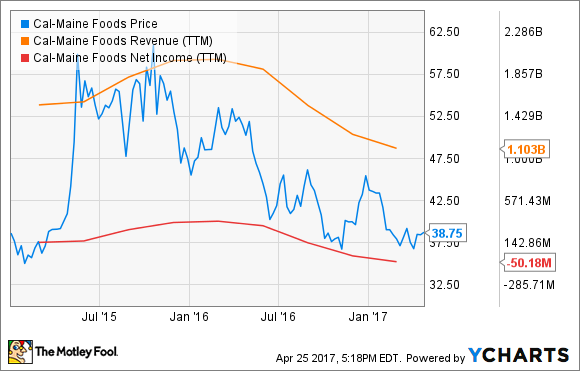 The outlook is no better

Egg prices paid to farmers have barely made a recovery. A few cases of avian flu were reported over the winter months, causing a brief rally in prices, but none of them affected what is now a younger and more productive national flock of egg-laying hens. 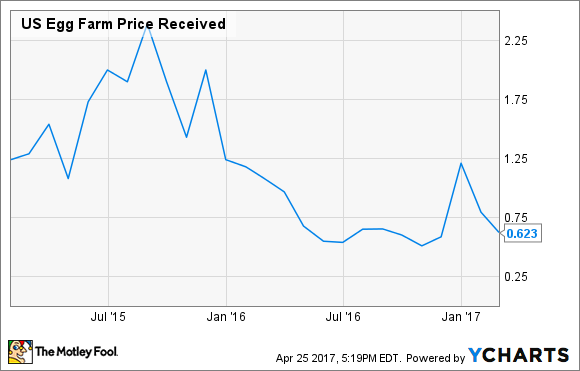 Management sees the pain persisting for some time. There is an oversupply of eggs on the market, which is keeping a lid on prices, and demand has yet to return to pre-flu levels. With that gloomy outlook, Cal-Maine has resorted to cost-cutting to keep things afloat.

It's not a great situation to be in, but the company has managed to make do. Feed costs have been trimmed 4.3% over the last year, and the overall cost of running farms is down 1.3%. Due in part to those efforts, Cal-Maine eked out a small profit for the first time since last summer during the last quarter.

However, that doesn't mean investors are out of the woods. One of the reasons to invest in Cal-Maine is its policy of paying out one-third of profits to shareholders as a variable dividend -- that is, assuming there are profits. The company also has a policy of running two consecutive profitable quarters in a row before doling out any cash.

With the bottom line for the fiscal year to date off by $50 million, the dividend is gone and not coming back for a while.

While the industry is struggling, Cal-Maine has gone on the offensive and has been buying smaller rivals. In the last six months, the company acquired two egg producers -- the first was Foodonics' 1.6 million hen operation back in November. In March, Happy Hen Egg Farms in Texas with its 1.2 million capacity operation was taken over. 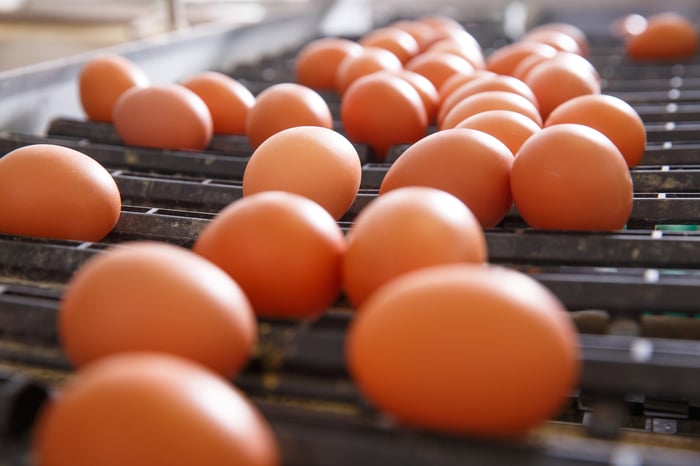 Other expansion projects aimed at increasing efficiency and production in key areas are also under way. The projects, which ring up to $86 million, are targeting the growing demand for cage-free and organic eggs. The company sees the industry slowly transitioning to cage-free over time, but it feels that investing early on will open up new growth opportunities in food service and for large nationwide retailers.

Cal-Maine is the heavy hitter in the egg industry with 23% of U.S. market share last year. However, despite efforts to control costs and consolidate the number of producers in the industry, the company is still reliant on egg prices. Until that price reverses its weak trend, it's hard to get excited about this stock.