Analyst firm Morgan Stanley says that Alphabet (NASDAQ:GOOG) (NASDAQ:GOOGL) is sitting on a gold mine in the self-driving car business. The Waymo driverless car business looks like a good spin-off candidate, and could be worth as much as $70 billion by the year 2030, according to Morgan Stanley analyst Adam Jones and his team.

That analysis pointed in the right direction, but I'm pretty sure that Waymo will be worth $70 billion much faster than that -- and much more after 2030.

Let me show you why. 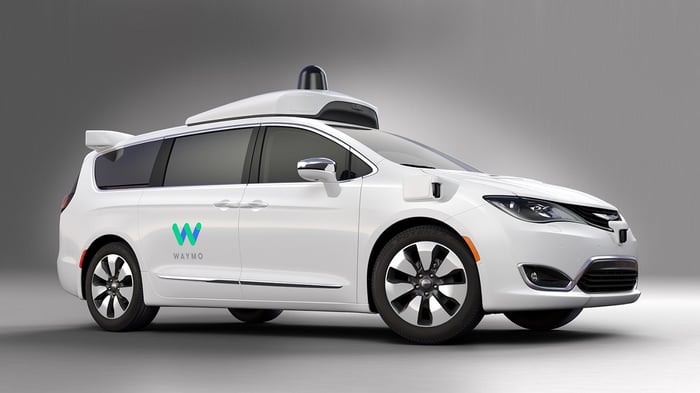 How Morgan Stanley landed at a $70 billion estimate

First and foremost, Morgan Stanley's investigation of Waymo's potential value rested on a single piece of news with very little supporting data. The Alphabet subsidiary struck a partnership with drive-hailing service Lyft, where the two businesses will work together to develop safer and more accessible self-driving products.

Neither Waymo nor Lyft published any official announcement materials concerning this deal, though both companies confirmed its existence when reporters reached out for clarification. We have no financial details on the agreement, no operational goals beyond "improving lives with the world's best transportation," and no other data on what Lyft and Waymo hope to achieve here.

Starting from that bare-bones news bite, Jones jumped to the conclusion that Waymo vehicles should account for roughly 1% of all miles driven globally by 2030, assuming a fleet of roughly 3 million cars driving 65,000 miles per year.

If Waymo can cull $1.25 of revenue per mile driven, that would amount to more than $240 billion in top-line sales at the end of Jones' forecast period. That could lead to an enterprise value of $140 billion, and Alphabet would then pocket $70 billion in a spin-off transaction that leaves the Google parent with 50% control of the stand-alone Waymo business.

That sounds great, but Jones is making a lot of assumptions to reach his $70 billion spin-out value, and I think that many of those educated guesses are much too conservative.

Lyft had roughly 100,000 drivers in early 2015 and more than 300,000 at the start of 2016. That massive growth rate is sure to slow down over the years, but Lyft should have much more than 3 million vehicles in service 13 years from now. The company has not yet committed to going all in on self-driving vehicles, but it would make economic sense to prefer driverless cars over error-prone, salary-craving human employees or contractors. By 2030, I expect ride-sharing and taxi services to offer human chauffeurs only as a high-priced, exclusive treat.

So 3 million driverless cars under the Lyft umbrella seems like an absurdly low estimate, unless the company itself is destined to let its early mover advantage in the ride-hailing market slip through its mustache.

With or without Lyft leading the charge, Waymo is sure to find many more partners along the way. The company currently looks unlikely to forge any bonds with drive-hailing market leader Uber, due to a spate of legal battles and the tough posturing that follows on both sides, but Waymo already has driverless car deals or serious discussions in place with Honda Motors (NYSE:HMC) and Fiat Chrysler (NYSE:FCAU), with many more contracts sure to follow. Some of these agreements may stop at testing projects and short-lived services, while others very well could blossom into legit rivals to Uber and Lyft.

That's just another way of saying that Jones' long-haul estimate of Waymo's driverless miles traveled looks much too low.

Fare costs are also likely to evolve a bit over then next thirteen years. It's unclear exactly how Jones arrived at $1.25 per mile going directly into Waymo's pockets, and the final tally could be very different. Human Lyft drivers make roughly $1.80 per mile today and automated cars should be expected to be a smaller drain on Lyft's operating income.

The final analysis depends on where you think Waymo's automated driver fees per mile will land, and how large a slice of the global ride-hailing market the company will serve.

The driverless car industry is only getting started, and it's anyone's guess who will emerge as a leader in this rapidly evolving field. Every carmaker worth its salt has an autonomous driving project in the works, along with a host of technology giants. Detroit meets Silicon Valley to create a brand-new market, and the only guaranteed winner is humanity. It won't be long before self-driving vehicles start saving thousands of American lives every year, and the car insurance industry will never be the same again.

That being said, Waymo was the first company to put fully automated vehicles on the road -- under the Google banner at first. The company remains a leader in the industry it pulled up by the bootstraps, and seems unlikely to let that advantage slip away. In the long run, Alphabet aims to shake loose from the Google moorings and become a cross-sector conglomerate with many significant revenue sources that have little or nothing to do with online search and advertising operations.

So far, Waymo looks like the first big success story in Alphabet's long-term diversification saga. I would be downright shocked if it took Waymo 13 years to reach a $70 billion spin-off value -- with or without Lyft by its side.