Shares of Atwood Oceanics (NYSE:ATW) are up 24% as of 10:45 a.m. EDT today. The surge in stock price comes after offshore oil rig peer Ensco (NYSE:VAL) announced it would acquire Atwood in an all-stock deal. For reference, shares of Ensco are down 5.3% so far today.

The writing has been on the wall for a while about a consolidation of the offshore rig industry. There is simply too much idle equipment and too many financially distressed companies in this industry. Atwood was a perfect candidate for a buyout. Its fleet was smaller, but it's a newer one, with the capabilities to handle the complex offshore jobs out there today. Also, its financial situation wasn't quite so dire that a potential acquirer would be overburdened with debt. 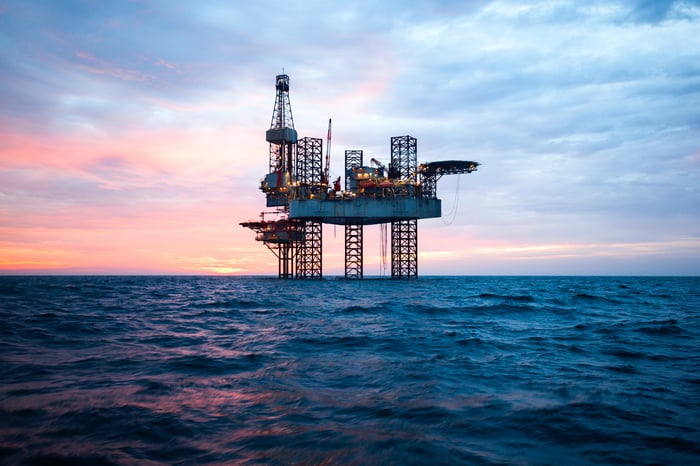 Today, Ensco announced that it would acquire Atwood in an all-stock deal currently valued at $6.9 billion. If it is approved, Atwood shareholders will receive 1.6 shares of Ensco for every share of Atwood. As you can imagine, today's price jump put Atwood's shares right around the acquisition price.

Ensco was one of only a small handful of companies in this particular industry that were in a position to pull off a deal like this. Probably the most encouraging part of the deal for shareholders of both companies is that no debt would be used to finance the acquisition.

Overall, this looks like the right deal done at the right time. Management will tout some things such as cost synergies and whatnot, but rig companies have cut expenses to the bone, so there isn't much left to squeeze out. This move was likely made under the assumption that the upswing in the offshore oil and gas industry is coming, and Ensco wanted to have the right assets in its portfolio to benefit when that time comes.

For investors in Atwood, having Ensco in their hands is a good thing. Its management team has done an excellent job of maintaining its fleet and has some of the highest customer-satisfaction ratings in the business. It's hard to see a reason to cash out after the bump.