Can delivery sustain the turnaround at McDonald's (NYSE:MCD)? The burger giant plans to expand its current delivery program in the U.S. from 2,000 restaurants to 3,500 by the end of this month. McDonald's has partnered with Uber Technologies, Inc.'s UberEATS service to reach this ambitious target.

The initiative to push burgers to the doorsteps of its core customers is part of its attempt to reinvent itself as a more contemporary burger chain. McDonald's is leaning heavily into what it pegs as a $100 billion market, targeting those who value convenience and are willing to pay the five bucks that Bloomberg News estimates as the average delivery fee per order. 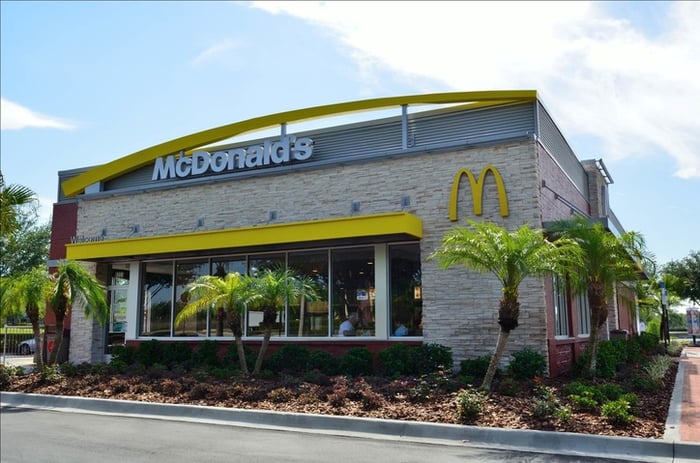 Delivery is one of three "accelerators" the company is using to stoke demand for its evolving menu. Its digital platform and the "Experience of the Future," a kiosk-based method of ordering and burger customization, form the other two accelerators.

At the moment, delivery is accelerating within a particular customer group. CEO Steve Easterbrook recently relayed that early adopters tend to be younger, with 60% of deliveries occurring in the evening, and no less than 30% occurring after 11 p.m.

But as the service scales past millennials seeking a snack in the wee hours, it's possible that the operational integration won't be so smooth. Starbucks Corporation (NASDAQ:SBUX) has found that throughput innovations such as Mobile Order & Pay can create their own unexpected challenges.

When Starbucks made it simple for customers to order ahead using digital devices, it didn't anticipate that bottlenecks in the primary in-store order line would shift to the digital-order pick-up line on the opposite end of the service counter.

A similar phenomenon could weigh on the McDonald's drive-through, where the company derives nearly 70% of its U.S. revenue. At first blush, it might seem that having customers choose delivery over driving to a nearby McDonald's would result in faster throughput at the window, with a positive impact on sales.

But what if the majority of deliveries don't represent cannibalized drive-through visits but new incremental orders? Operationally, higher order uptake in and around peak hours could mean that both in-store guests and drive-through customers experience longer wait times. This could happen even as a particular location isn't visibly busy.

Chipotle Mexican Grill (NYSE:CMG), which is itself actively attempting to increase food consumed outside its restaurants, has countered this potential problem by creating a second "make line" in the back of its stores to handle take-out, catering, and meals delivered by third-party vendors.

Given the recent investments at McDonald's in store upgrades, the Experience of the Future kiosks, and other operational expenditures, U.S. franchisees will probably make simpler kitchen modifications than a second line to handle any higher output resulting from deliveries.

If any complexities arise, McDonald's will have a good problem on its hands -- and herein lies the upside to the company's big delivery experiment. What's really still missing from the company's turnaround narrative is an improvement in traffic, especially in the United States.

You may recall the company's acknowledgement earlier this year that it had lost over 500 million U.S. customer visits since 2012. A U.S. comparable-sales increase of 1.7% during the first quarter of 2017 was driven by price and product mix, but not higher guest visits. As CFO Kevin Ozan noted, though they've improved, guest-count trends in the U.S. remained negative in the first three months of the year.

Delivery could provide the missing link of improved order frequency, thus providing a lift to comparable sales for years to come. Delivery implementation across most U.S. restaurants will be a long process, and it won't be an error-free one. Yet consumers are only increasing their online orders of retail items, groceries, and even fast food, given free shipping or an acceptable delivery fee. For McDonald's shareholders who are in for a multi-year holding period, delivery could become one of the rare long-term initiatives that open up sustained incremental orders and provide a base for extended revenue growth.