President-elect Donald Trump didn't offer much support to pro-marijuana advocates during his campaign, and once he won the presidency, his appointment of marijuana foe Jeff Sessions to U.S. attorney general signaled his view hadn't changed.

Now, reports reveal that Sessions is mounting a campaign in Washington to garner support for enforcing federal marijuana laws on pot companies operating in states that have passed pro-marijuana legislation.

Sessions' backroom lobbying suggests that the Trump administration's position toward marijuana isn't easing, and that a hard-line approach to cannabis could be enacted in the future. 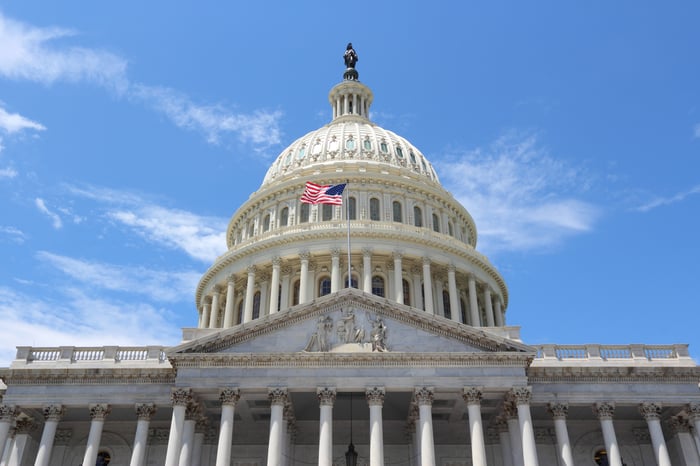 Advocacy of pro-pot laws has resulted in the passing of medical marijuana legalization in over two dozen states and recreational marijuana laws in eight states. An additional 16 states have also passed laws allowing the use of cannabidiol (CBD) for medical purposes.

In states that have the longest established medical and recreational marijuana laws, marijuana has become a major source of tax revenue. For example, California's had medical marijuana laws on its books since the 1990s, and according to Matt Karnes at GreenWave Advisors, a marijuana industry research firm, marijuana sales there will total about $2.8 billion in 2017.

Over in Colorado, where recreational marijuana laws were passed in 2012, cannabis sales eclipsed $1 billion last year. According to the state's tax department, it is collecting about $18 million per month in marijuana taxes, licenses, and fees.

As these markets mature and expand, marijuana's impact on state budgets is expected to increase in the coming years. California passed recreational laws last year, and Karnes estimates that its recreational market will grow to $7.7 billion by 2021.

Other heavily populated states are also getting in on the action. In November, Florida voters approved medical marijuana laws that open it up to a market that could value as high as $708 million in 2021, according to Karnes.

In the past, Sessions has been very vocal about his opposition to marijuana legalization, and he was a big supporter of President Reagan's war on drugs. Last April, he said, "We need grownups in Washington to say marijuana is not the kind of thing that ought to be legalized, it ought not to be minimized, that it is in fact a very real danger."

Apparently, he's now using his bully pulpit to strong-arm support to battle back against states that have passed pro-pot laws.

According to The Washington Post, he's asking Congress to roll back protections put in place under President Obama that limit the federal government's ability to crack down on marijuana companies in pro-cannabis states.

Specifically, he wants to do away with the Rohrabacher-Farr amendment, which prohibits the use of federal funds to interfere with states' implementation of their own state marijuana laws.

In a letter addressed to senior leaders in the Senate and House from both parties, Sessions appears to condemn a Ninth Circuit court ruling that prohibits his department from pursuing enforcement of the federal Controlled Substances Act against individuals operating marijuana businesses in compliance with state law.

He argues that limiting the scope of his departments enforcement of the Controlled Substances Act is "unwise" in a period of "an historic drug epidemic and potentially long-term uptick in violent crime."

Furthermore, he goes on to say that marijuana studies show it poses significant health risks, such as lung infections; that it use reduces a person's IQ; and that it contributes to addiction. Based on his letter, he appears to be attempting to tie marijuana use to the opioid epidemic, despite studies that suggest a decreased risk of opioid abuse in states with pro-pot laws on the books.

The stock market hates uncertainty, and a less-than-supportive Washington is creating a significant amount of that right now.

For instance, GW Pharmaceuticals (NASDAQ:GWPH) has proven in clinical studies that its CBD-based drug Epidiolex reduces seizures in patients with rare forms of childhood epilepsy that are hard to control. It plans on filing for FDA approval soon, but an approval depends on a willing FDA. The FDA is a science organization, and its decisions shouldn't be impacted by political will. However, the risk of a rejection exists given the FDA commissioner is appointed by Trump.

The uncertainty could also weigh down investment in capacity, and that risk may be contributing to the slide in The Scotts Miracle-Gro Company (NYSE:SMG). Over the previous two years, Scotts Miracle-Gro shares had been surging higher following its investments in companies serving the hydroponics industry. Year to date, shares are down 6% while the S&P 500 market index is up 9%. 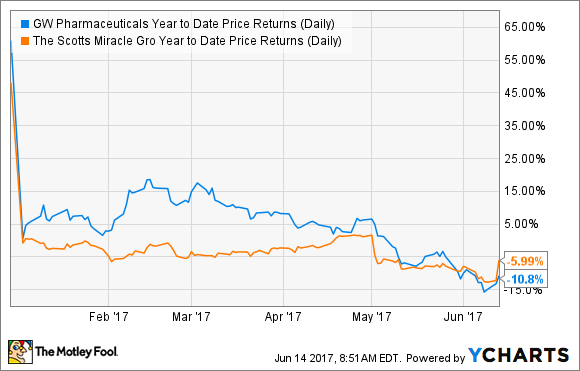 Overall, uncertainty over the future of marijuana will remain until the mood in Washington changes. Additional states may take up legalization, but investment supporting this emerging market could be crimped unless the federal government confirms that it's content to leave this as a states' rights issue. Unfortunately, marijuana stocks -- especially those principally reliant on U.S. markets -- remain high-risk bets, unsuitable for all but the most risk-tolerant of investors.