Celgene (NASDAQ:CELG) stock has been in my investment portfolio since 2013. I've enjoyed a couple of great years with the biotech stock performing really well. Over the past couple of years, though, Celgene hasn't generated high returns.

Despite the lackluster performance since the second half of 2015, I have held on to every single Celgene share I owned. And I don't anticipate selling the stock in the future. Why? Here are three reasons buying Celgene stock and never selling makes sense. 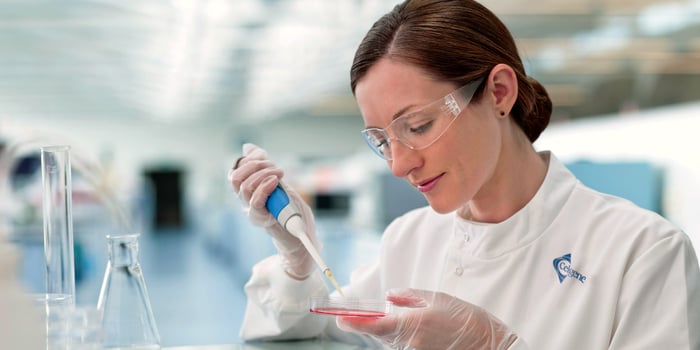 What about potential challengers? Johnson & Johnson's (NYSE:JNJ) Darzalex is probably the most significant potential rival. Right now, though, J&J's drug is approved only in combination with other drugs in treating multiple myeloma, one of which is Revlimid. In a few years, Darzalex could be a greater threat.

However, I seriously doubt that Celgene will relinquish its leadership position. The biotech has several promising pipeline candidates that could extend its domination in blood cancer. Durvalumab, luspatercept, and CC-486 are just three experimental drugs with blockbuster potential for which Celgene could win regulatory approval by 2020.

Celgene doesn't just have a research and development team, it has an R&D ecosystem. The biotech is working on developing plenty of drugs on its own, but it has teamed up with many other companies as well. The following chart shows just how extensive this ecosystem is.

Celgene's collaboration partners include many up-and-coming biotechs. Experimental multiple myeloma drug bb2121, for example, is being developed in partnership with bluebird bio (NASDAQ:BLUE). Celgene and Bluebird have worked together since 2013. The partners recently reported some very encouraging data on bb2121 at the American Society of Clinical Oncology (ASCO) meeting.

However, Celgene also has partnered with some large companies, such as big drugmaker AstraZeneca (NASDAQ:AZN). Celgene and AstraZeneca subsidiary MedImmune are collaborating on development of promising PD-L1 inhibitor durvalumab.

This R&D ecosystem with big and small partners should enable Celgene to remain competitive in a wide range of therapeutic categories for a long time to come. That means that Celgene's revenue and earnings should continue growing at or near the impressive rates of the past.

3. Wise use of capital

Celgene generated a solid free cash flow of more than $3 billion in the past 12 months. The company had nearly $8.9 billion in cash (including cash, cash equivalents, and marketable securities) at its disposal at the end of the first quarter of 2017. But it's how Celgene uses its capital that makes the stock one to hold for the long term.

Rather than pay out a dividend (which it could do if it chose), Celgene reinvests its capital into advancing and expanding its pipeline. A great example of this was the 2015 acquisition of Receptos for $7.2 billion. With this deal, Celgene picked up ozanimod, which could generate between $4 billion and $6 billion in peak annual sales if ultimately approved for the three targeted indications -- multiple sclerosis, Crohn's disease, and ulcerative colitis.

Investors can take comfort in Celgene's proven track record of using money wisely to generate solid long-term returns. There's every reason to think that the company will continue making smart acquisitions that pay off.

Never is a strong word. Even legendary investor Warren Buffett, who firmly subscribes to the concept of buying and holding for the long run, sells some of his stock holdings when conditions change. There's always the possibility that something could happen (for example, a change in management) that leads the company down a path where the stock is no longer a good investment choice.

However, I don't see myself selling Celgene stock for years to come. I wrote in April that Celgene was the one stock I'd buy if I didn't already own it. I still think that's true. You should probably never say never, but there are good reasons to think right now that Celgene is a stock to buy and (possibly) never sell.