Nothing is certain but death and taxes -- not even investing. There are no guarantees when you're putting your money in the stock market, and investors looking for a sure thing are bound to be disappointed. Yet there are a few things investors can look for to give them a better chance of finding a successful investment.

Find a company that's tapping into an emerging trend and is the dominant player in that field. Seek out an innovator that isn't afraid to take calculated risks to leverage the future. Look for a company that's continuously investing in its business and focuses relentlessly on its customers. One that's disrupting the status quo and forging a new future.

If you haven't guessed by now, the company I'm referring to is Amazon.com, Inc. (NASDAQ:AMZN). Not only is the company the undisputed leader in e-commerce, but it's also the top provider of cloud computing, and one of several companies with enough scale to make a meaningful entry into artificial intelligence (AI). 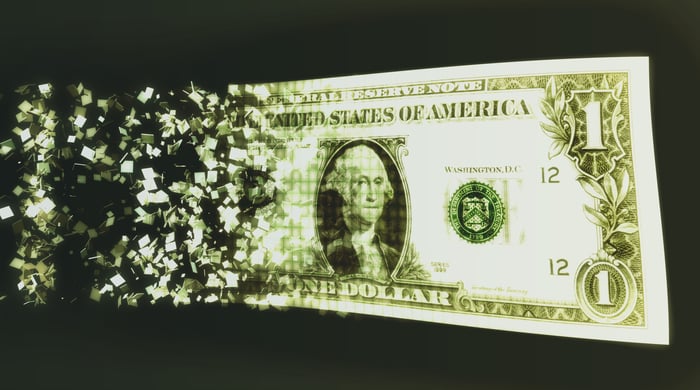 More money is going to e-commerce than ever before. Image source: Getty Images.

Back in 1994, Amazon was born into the "dot-com" era and sought to provide book lovers with a greater selection than they could find at their local bookstore. Many companies didn't survive those boom-or-bust years, but under the leadership of Jeff Bezos, Amazon thrived. Preferring a sustainable business model and an extraordinarily slow path to profitability, Amazon was the antithesis of the companies that failed during the dot-com bubble.

Fast-forward to today, and Amazon is synonymous with e-commerce. It's the fourth largest company in the world in terms of market cap, at $475 billion, and no other e-tailer is bigger. In its most recent quarter, the company produced $36 billion in revenue, a 23% increase over the prior-year quarter, and net income that grew 41% year over year.

The trend in e-commerce is undeniable, having grown from 3.5% of U.S. retail in 2007 to 8.4% today, and Amazon is at the heart of the trend. An estimated 80 million U.S. customers are members of Amazon's Prime service, according to Consumer Intelligence Research Partners. That's significant, considering there are only 118 million households in the United States.

The $99 annual subscription price for Amazon Prime entitles users to two-day shipping (and they sometimes get same-day shipping), along with access to a host of other perks, including unlimited streaming from a catalog of movies, TV shows, and electronic books. This strategy has paid off, as these customers spend an estimated $1,300 per year, compared with $700 for non-members.

Amazon clearly dominates the e-commerce space, but that's not all you get when you invest in this company.

Amazon has moved convincingly into AI, and the most public-facing example of the technology is Alexa, the company's virtual assistant, which powers the Echo family of smart-home speakers. The Echo responds to the sound of the user's voice and can complete a variety of tasks, such as streaming music, searching the web, and controlling other smart-home products. Alexa has amassed an impressive and growing resume, able to respond to 10,000 "skills" or commands. It can schedule a car from a ride-hailing service, order pizza, or check your credit card balance, just to name a few features. But this isn't where AI brings Amazon the most value, according to Bezos:

Amazon is also the leader in cloud computing with its Amazon Web Services (AWS), which has grown to be a significant contributor to the company's success. While AWS represented just 10% of Amazon's revenue in the most recent quarter, it accounted for 89% of operating income, up from 56% in the prior-year period.

A bold vision of the future

Amazon is the leader or a major contender in three of the biggest trends out there: e-commerce, cloud computing, and AI. It's difficult to imagine where the company won't be in 20 years' time. With that kind of domination and its influence growing, investors should get on board or risk being left behind.