The Internet of Things (IoT), which links various objects to each other and the cloud, has become a hot market over the past few years. These "things" include wearables, drones, home automation devices, connected cars, and other "smart" objects. 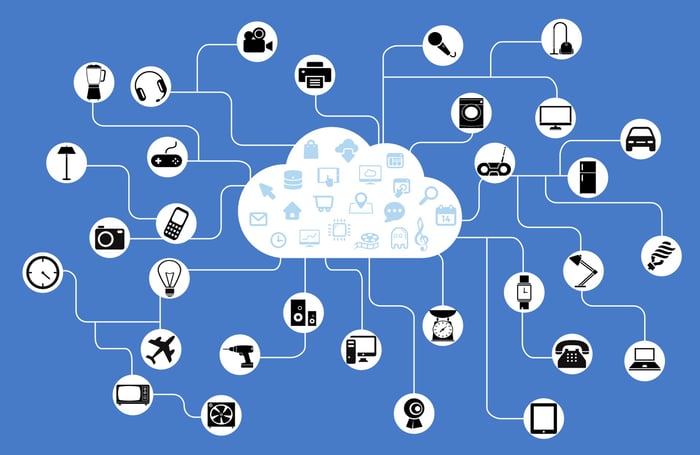 That growth sounds amazing, but investors might be unclear about which companies could benefit the most. Let's examine three straightforward IoT stocks you can consider buying this year -- Sierra Wireless (NASDAQ:SWIR), Qualcomm (NASDAQ:QCOM), and Cisco.

Sierra Wireless is the largest manufacturer of 2G, 3G, and 4G embedded modules and gateways in the world. These products enable M2M communications between IoT devices.

Sierra is often called a "pure play" on the IoT market, and the bullish thesis is simple: as the number of connected devices rises, so will its revenue and earnings. Sierra is also widening its moat against competitors by acquiring smaller wireless connectivity players and offering cloud services for analyzing data from its modules and gateways.

Analysts expect Sierra's revenue and earnings to respectively rise 10% and 53% this year, as its OEM sales (a soft spot in 2016) improve and its inorganic growth boosts its scale and operating margins. Although Sierra relies heavily on acquisitions, its free cash flow remained mostly positive over the past five years, and it has no debt.

Sierra's main weakness is its valuation. The stock trades at 62 times earnings, which is much higher than the industry average of 27 for communication equipment makers. However, its forward P/E is 27 meaning, if it remains on track to meet its growth targets, it could still be a great long-term play on the IoT market.

Qualcomm, the biggest mobile chipmaker in the world, has been weighed down by antitrust lawsuits and ugly legal clashes with big customers regarding its patent licensing practices over the past two years. Its lower-margin chipmaking business, which generates most of its revenue, is also ceding market share to cheaper rival chipmakers like MediaTek and first-party chipsets from big OEMs like Huawei. That's why analysts expect Qualcomm's revenue and earnings to respectively fall 3% and 4% this year.

However, Qualcomm has been expanding into adjacent markets -- like wearables, drones, connected cameras, connected cars, and other IoT devices -- to reduce its dependence on the mobile market. In wearables, over 80% of Android Wear devices already use Qualcomm chips. In the drone market, its Snapdragon Flight platform lets OEMs quickly launch their own drones, and its Snapdragon Automotive chips are challenging NVIDIA's Tegra chips in connected cars.

Qualcomm is also using big acquisitions -- like its $2.4 billion purchase of CSR in 2015 and its planned $47 billion takeover of NXP Semiconductors -- to become the biggest automotive chipmaker in the world. All these moves could help Qualcomm, which trades at a reasonable 19 times earnings, benefit greatly from the growth of the IoT market.

As of one the largest networking hardware makers in the world, Cisco would benefit from rising demand for its routers, switches, and other bundled software services across the IoT market. Analysts expect Cisco's revenue to fall 3% this year due to sluggish sales of its routers and switches, but it's been expanding into higher-growth markets like cybersecurity, wireless services, and IoT solutions. Cisco is also partnered with major automakers to provide in-vehicle network technology for high-speed data transfers -- which may bridge the gap between today's connected cars and fully autonomous ones. It even launched IoT workshops worldwide to tether developers to its ecosystem.

Prior to making those moves, Cisco launched its "Connected Analytics for the Internet of Everything" initiative -- which integrated data analytics capabilities into its existing network hardware -- in late 2014. These investments ensure that Cisco's hardware and software businesses benefit from the growing number of connected devices worldwide. For now, Cisco remains a cheap stock with a P/E of 16, compared to the industry average of 27 for communication equipment makers.

Sierra, Qualcomm, and Cisco could all reap the benefits of a growing IoT market, but investors should take the industry forecasts with a grain of salt. IoT forecasts have been gradually reduced over the past few years, and recent concerns about privacy and security have led some companies to think twice before connecting everyday objects to the internet.