Please ensure Javascript is enabled for purposes of website accessibility
Log In Help Join The Motley Fool
Free Article Join Over 1 Million Premium Members And Get More In-Depth Stock Guidance and Research
By John Maxfield - Updated Jun 8, 2021 at 11:11AM

Bank of America’s earnings are expected to increase in the quarter, but not as much as originally thought.

When Bank of America (BAC 1.03%) reports second-quarter earnings next Tuesday, investors can expect its earnings to rise on both a sequential and year-over-year basis. That is, at least, the word from the analysts.

The consensus estimate of analysts tracked by Yahoo! Finance is for Bank of America to earn $0.43 per share in the three months ended June 30. That compares to the $0.41 per share that it earned in both the second quarter of last year and the first quarter of this year. 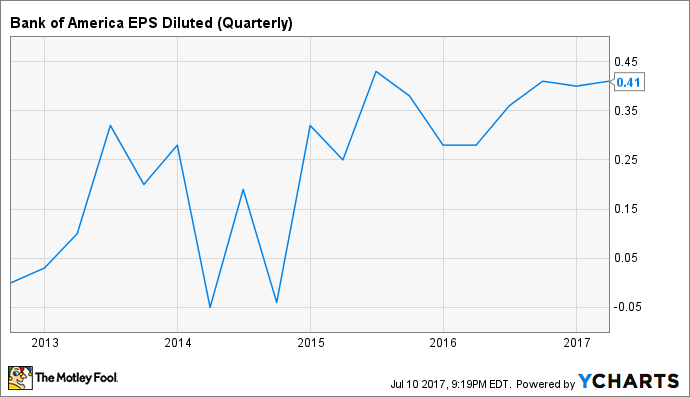 Analysts have lowered their expectations for Bank of America's earnings over the last few months. The consensus estimate three months ago was $0.46 per share. That increased to $0.47 per share a month later, before dropping to the current consensus.

The decline in analysts' estimates isn't a good thing, but it's also not a big surprise. The trend is tied principally it seems to Bank of America's trading revenues.

As a universal bank, with both investment and commercial banking operations, Bank of America generates a meaningful amount of revenue from acting as a market maker for clients -- facilitating the purchase and sale of investment securities like stocks and bonds. In the first quarter of the year, the Charlotte, North Carolina-based bank earned $3.9 billion worth of sales and trading revenue in its global markets segment.

But trading revenues are highly volatile. When there's a lot of market activity, banks make more money than when activity is low. And therein lies the issue in the second quarter.

"Volatility has been very low this quarter, which has certainly led to somewhat of a softer trading environment, especially in the fixed income and equity markets," noted Citigroup chief financial officer John Gerspach last month. "So given that slower trading environment, we would expect revenues in our fixed income and equity markets to be down year-over-year in the -- I guess I'll call it -- the low double digits range, maybe 12% to 13%."

Other banks have said the same thing. Here's JPMorgan Chase's chief financial officer, Marianne Lake, at the end of May: "Low rates, a more cautious outlook on rates, low volatility have led to low client flows and a generally quiet, subdued and challenging trading environment."

The net result is that banks with trading operations, Bank of America included, expect to see their trading revenues fall in the second quarter.

Fortunately, shareholders in Bank of America should have plenty of other positive takeaways from the bank's second-quarter performance. The interest rate increases in March and June should push its net interest income higher, and Bank of America continues to pare expenses and see its earnings stabilize.

The nation's second-biggest bank by assets also recently passed the stress tests, proving that it has more than enough capital on its balance sheet to survive even a severely adverse economic downturn akin to the financial crisis. As a result of its performance on the stress tests, Bank of America was given the go-ahead by regulators to raise its dividend and increase its share buyback program, which it promptly did.

In short, while analysts have been tempering their expectations for Bank of America's second-quarter earnings of late, thanks largely to an anticipated drop in its trading revenues, the bank nevertheless continues to make progress when it comes to growing and stabilizing its bottom line.