Traditional brick-and-mortar retailers are being decimated by the onslaught of competition from e-commerce. The weakest among them have already gone bankrupt -- RadioShack, hhgregg, and Sports Authority are just a few examples. And now, even once iconic retailers are being forced to shutter hundreds of stores as they retreat to what they hope are more defensible positions. Unfortunately, this may ultimately prove futile for many traditional retailers, as consumers' shopping habits continue to shift online and away from store-based purchases.

Department stores such as J.C. Penney (OTC:JCPN.Q) are particularly exposed to these devastating trends -- so much so that investors may be best served by selling their shares. In this regard, here are three reasons why more pain may lie ahead for J.C. Penney and its shareholders. 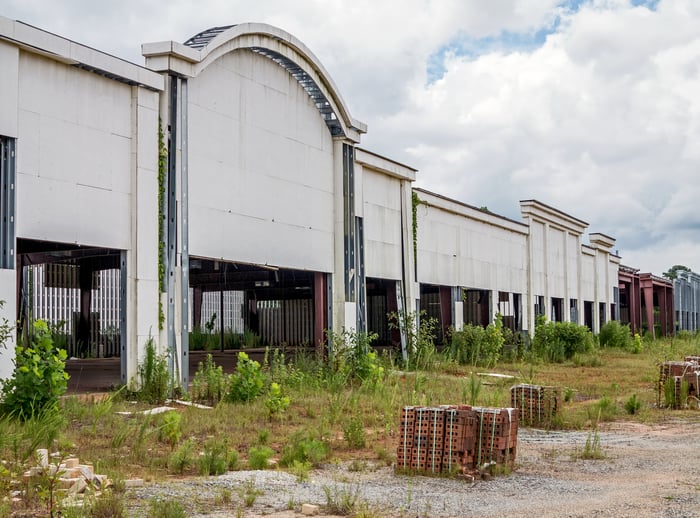 America's malls are in trouble. In the decade from 2005 to 2015, U.S. department-store sales fell by 30%, according to the U.S Department of Commerce. 2016 marked the 11th consecutive year of sales declines, with sales falling 5.6% -- the second-largest drop since the government began keeping track in the early 1990s, and just slightly less severe than the fall during the Great Recession.

This worrisome trend is likely to continue -- and perhaps even intensify. In fact, as many as a quarter of American malls will close within five years, according to research firm Credit Suisse. Worse still, real estate information-provider CoStar estimates that nearly 1 billion square feet of retail space will need to be "rationalized" in the coming years, as retailers shutter even more stores in response to further declines in traffic.

2. Looks can be deceiving

In the face of these difficult macroeconomic headwinds, J.C. Penney has made a valiant attempt to navigate these treacherous waters. After years of gruesome losses, the department-store chain actually reported a full-year adjusted profit of $24 million in 2016, its first annual profit since 2010. The company followed that up with adjusted net income of $19 million in the first quarter of 2017.

However, as my colleague Timothy Green explains, J.C. Penney's non-GAAP figures arguably overstate the true underlying profitability of its business by including non-recurring items. For instance, if we back out the $117 million J.C. Penney received from one-time asset sales, it would have delivered a $98 million adjusted loss in the first quarter.

Looking ahead, J.C. Penney is guiding for adjusted net income between $123 million and $201 million in fiscal 2017. But if we account for the asset-sale gain in the first quarter, those figures fall to a range of only $6 million to $84 million. And if these figures turn out to include more asset sales over the course of the year, J.C. Penney's true earnings could be even lower, and potentially even a loss.

In all, investors who believe that J.C. Penney shares are attractively priced based on its reported non-GAAP results and financial outlook may be in for a rude awakening. Upon closer inspection, J.C. Penney's profits are not as strong as the company would have you believe, and shares are therefore not quite the bargain they may appear to be.

3. Sears' demise does not equal salvation

One of the core arguments of J.C. Penney bulls is that the struggling department-store chain stands to benefit from the even greater troubles of its major rival, Sears Holdings (NASDAQ:SHLDQ). Yet while that's true to some extent, the bulls are likely being overly optimistic as to the long-term benefits of a potential Sears bankruptcy.

J.C. Penney's sales should receive a (temporary?) boost as Sears continues to close stores. To seize this opportunity, J.C. Penney is ramping up its appliance and home-goods offerings, and the company has seen positive early results from these product lines. But investors should ask themselves this: If selling appliances and other home goods is such a great business, then why didn't it work for Sears?

Part of the reason is that large items, such as mattresses, are increasingly being sold online, with e-commerce companies such as Casper and Tuft & Needle gaining share in recent years. As such, investors hoping that these new categories will be J.C. Penney's salvation are likely to be disappointed.

Ultimately, many J.C. Penney shareholders' investment theses are founded upon the belief that the company will survive the retail apocalypse -- and that may prove true. But mere survival does not make for a great investment, and certainly not one that's likely to beat the market over the long term.

You may wish to ask yourself this question: Do you envision a scenario, say three to five years from now, in which J.C. Penney is suddenly a thriving business? If the answer is no, you may be better served by selling your J.C. Penney shares today and reallocating your funds toward more promising investments.