It's been more than a month since Amazon.com (NASDAQ:AMZN) announced it was buying Whole Foods, putting Kroger in its crosshairs -- and Kroger stock in the garbage bin. It hasn't even been a week since Amazon announced the addition of Kenmore to its offerings, scaring investors away from appliance retailers. Meanwhile, Wall Street is frantically looking around, trying to find an Amazon-proof retailer...anywhere.

This morning, JPMorgan thinks it's found one. Here's what you need to know about that. 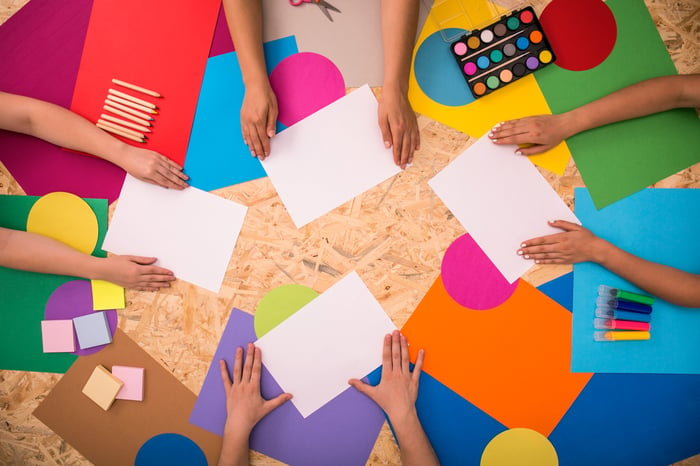 1. A artsy (and crafty) way to beat Amazon

Bright and early this morning, JPMorgan announced it is upgrading shares of arts and crafts store chain The Michaels Companies (NASDAQ:MIK) to outperform. As explained in a write-up on StreetInsider.com (requires subscription), JP has multiple reasons for liking Michaels. The reason most relevant to headline news today, though, is the fact that JPMorgan thinks Michaels has relatively "lower eCommerce encroachment risk" than other retailers.

As a parent of small children, I'm inclined to agree. Michaels may not always have the best prices on arts and crafts supplies. But when inspiration strikes and my kids come up with an idea for a project they want to do, logging onto Amazon.com to order up various flavors of glue, glitter, poster board, and pipe cleaners is not the first thing on their minds. They want me to fire up the minivan and cart them to Michaels to stroll the aisles and see what's on hand that might suit the project...or inspire them to do another project entirely!

2. Michaels still on the move

Aside from Michaels' ability to get customers in the store to touch and feel the crafts supplies they might want to buy, is there anything else working to the advantage of Michaels stock? JPMorgan thinks there is.

For example, you might not think of arts and crafts as a "growth" business, and it's true that Michaels' revenue was basically flat last quarter. Still, sales at Michaels are up 18% over the past five years, and net income has nearly doubled -- from $200 million earned in 2013, to net profits of almost $380 million over the past 12 months. What's more, JP sees Michaels' same-store sales turning around as early as this year's second half (so...now), which should keep this years-long growth story intact, and revenue and profits flowing.

3. Where are we going to put all this cash?

Speaking of profits, Michaels has a lot of them -- even more than the $380 million in net earnings implies. In fact, data from S&P Global Market Intelligence show that Michaels generated nearly $500 million in positive free cash flow over the past 12 months. And what will the company do with all that cash?

Debt repayment is one option. Although valued at $3.6 billion, Michaels stock is a bit pricier than it looks because the company carries $2.5 billion in net debt. Strong free cash flows could make short work of that, however.

That said, JPMorgan has its eye on the potential for more share buybacks instead. Michaels' share count is already down 10% over the past year, and with the stock looking cheap, JP seems to think that spending excess cash on buybacks would be a smarter move for Michaels at the current price point than debt repayment.

I'm inclined to agree. Michaels stock currently sells for 10.3 times earnings. Valued on cash profits, and factoring net debt into the picture, the stock's only a little bit more expensive. Michaels stock has an enterprise value (EV) of $6.1 billion, free cash flow (FCF) of $496 million, and thus an EV/FCF ratio of 12.3.

These are cheap valuations given that most analysts who follow Michaels stock expect it to grow earnings at roughly 14% annually over the next five years. The stock may be even cheaper in the short term, with JP predicting Michaels will earn $2.11 per share this year (nine times current-year earnings), and $2.30 next year (8.3 times forward earnings).

All things considered, I think JP Morgan is right to recommend it.