Alphabet's (NASDAQ:GOOG) (NASDAQ:GOOGL) Google has its eye on the mobile virtual reality (VR) market and on its recent second-quarter, 2017 earnings call it looks as if the company is working to expand its reach in the nascent market.

Google CEO, Sundar Pichai, said on the call that;

We continue to work on the next generation of computing platforms, virtual and augmented reality. By the end of this year, there'll be 11 Daydream-ready devices on the market from manufacturers like Samsung, LG, Motorola and ASUS. 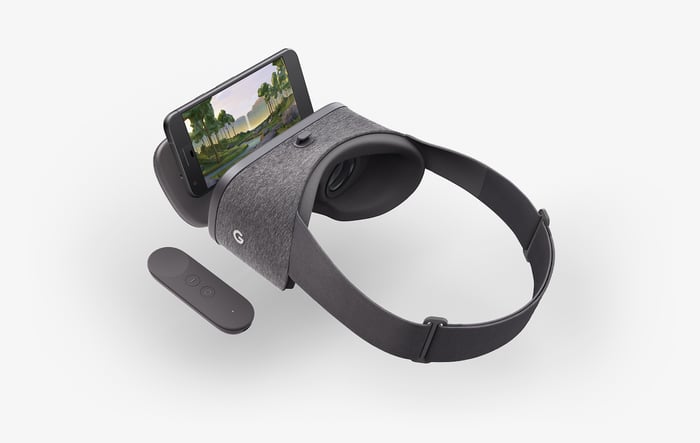 You can read about some of Google's recent augmented reality plans here, but let's focus right now on those 11 VR devices. The Daydream VR platform launched last year as a place for Android users to find and download VR apps, and it already has more than 150 apps on it. It might seem like a minor point Pichai made on the earnings call, but the growing number of devices point toward a large mobile VR market that Google is set on dominating.

There are already a handful of Daydream VR-ready devices, like the company's own Google Pixel phones, Motorola's Moto Z, and Samsung recently said its Galaxy S8 and S8 Plus would soon receive updates to run Daydream.

Adding additional VR-ready devices will allow Google to expand its Daydream platform and tap into the mobile VR market even further. A market which is expected to be worth $10.9 billion by 2021.

The real opportunity here for Google is in getting more users to download Daydream apps, which fuels growth for the company's Google Play app store and, eventually, more ad revenue. App Annie recently said that Google Play revenue will jump from about $16 billion in 2016 to $42 billion in 2021. It's still unclear where that additional revenue will come from, but advertising revenue is likely a good bet. Google is already working on ways to serve up ads inside of Daydream apps that could help drive ad revenue inside the Play store higher.

Take the long view for this one

The disclosure that there will be 11 devices on the market this year that can run Daydream VR apps isn't going to bring in truckloads of cash for Google anytime soon. But it's yet another step toward the company dominating the mobile VR space. No other company is selling more mobile VR headsets right now and none have the mobile VR advertising opportunity that Google's VR apps could bring.

This position will likely be a slow burn for Google over the coming years. But investors should remember that users downloaded 82 billion apps from the Google Play store in the last year alone and there are currently more than 2 billion monthly active Android devices worldwide.  As Google's Daydream VR platform is added to more devices the company's opportunity to profit from mobile VR grows. Because of that, investors should be pleased to see the news of more Daydream-ready devices hitting the market -- and keeping an eye out for future announcements as well.