General Motors' (NYSE:GM) deliveries of its late-2016 launched all-electric Chevrolet Bolt hit a new all-time high in July, rising to 1,971 units. The record monthly deliveries for the model bode well for the vehicle's longer-term potential. But are sales of the vehicle below what GM was hoping for?

Here's a closer look at GM's Bolt sales -- and what to expect from them going forward. 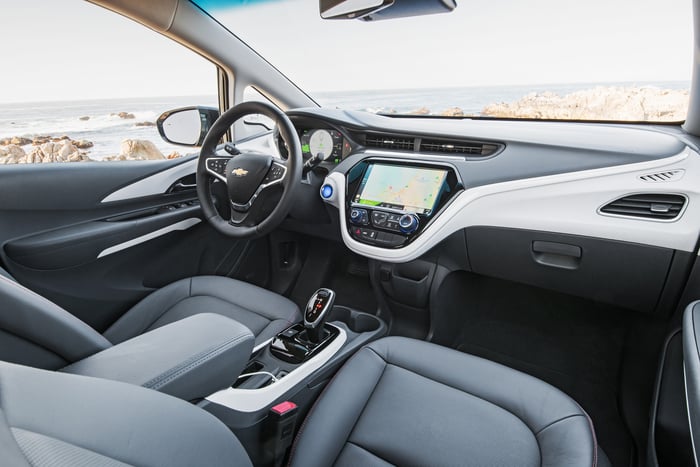 GM's 1,971 Bolt deliveries during July were up nicely from the previous monthly record set in June, when GM shipped 1,642 units. 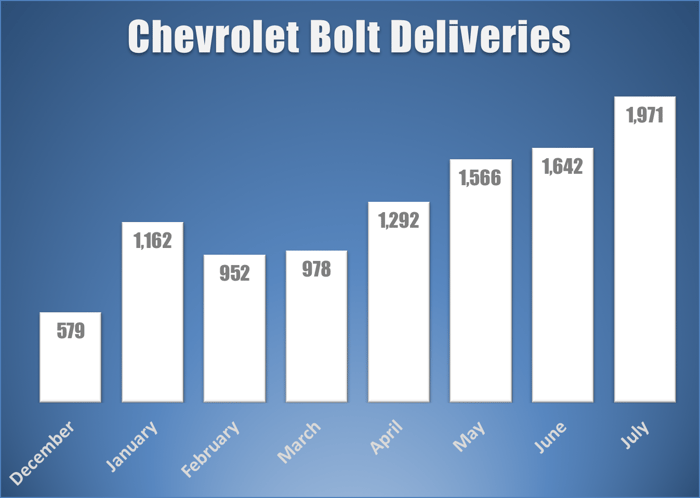 The record monthly figure marks the fifth quarter in a row that Bolt deliveries have increased.

Before July, Bolt sales were limited to 16 states. But the vehicle rolled out to Arizona, Florida, Illinois, and Pennsylvania in July, officially bringing the Bolt to the majority of the nation's most populous states. Looking ahead, GM likely believes Bolt deliveries are about to increase further, as the company went out of its way to note in its press release about July vehicle sales that "August will be the first month the Bolt EV is available on a national basis."

Despite the Bolt's increasing sales recently, its sales trajectories indicate the new vehicle may be underperforming management's initial expectations. At one point last year, GM management had said the company could deliver up to 50,000 units in the first year of sales if demand justified it. Further, GM management was initially targeting around 25,000 to 30,000 Bolt deliveries in 2017, according to a report from Reuters.

But given how new the Bolt is, it's difficult to draw any concrete conclusions based on monthly sales trends. Not only were Bolt deliveries initially limited by supply, but launches in various markets in different periods also affect monthly sales. However, the longer-term trend of steadily rising Bolt deliveries suggests there's still upside for the Bolt.

What about Tesla's Model 3?

Notably, the Bolt is now up against some formidable competition. Electric-car maker Tesla (NASDAQ:TSLA) started delivering its highly anticipated $35,000 Model 3 on July 28. While deliveries of the vehicle are still severely limited, with Tesla only expecting to deliver around 100 units in August, production and deliveries are expected to climb quickly. By September, Tesla expects to deliver about 1,500 Model 3s. And Tesla is aiming to deliver about 10,000 units in December alone as it continues to ramp up production. There's clearly significant demand for Tesla's Model 3, as the company has indicated that it has about 455,000 deposit-backed reservations for the vehicle, and since Tesla's Model 3 launch event, the company has been averaging about 1,800 net Model 3 reservations every day. Can the Bolt's deliveries increase much higher when it's up against a vehicle that has generated so much interest from customers?