Harley-Davidson (NYSE:HOG) may still be toying with the idea of buying Italian sports bike maker Ducati, but Polaris Industries (NYSE:PII) is showing a better way to grab the attention of young motorcycle riders. Its new Scout Bobber is an aggressively designed urban bike that continues the move away from many of the classic Indian Motorcycle styling points, one that should allow it to continue taking market share from Harley.

When Polaris resurrected Indian out of bankruptcy in 2011, the first bikes were all about the vintage look of the motorcycle company's heritage. The Chieftain, Chief Classic, and Chief Vintage were big bikes, as were many of those that followed -- touring motorcycles with saddlebags and comforts meant for long periods astride these steel horses. That's not what a bobber is about. 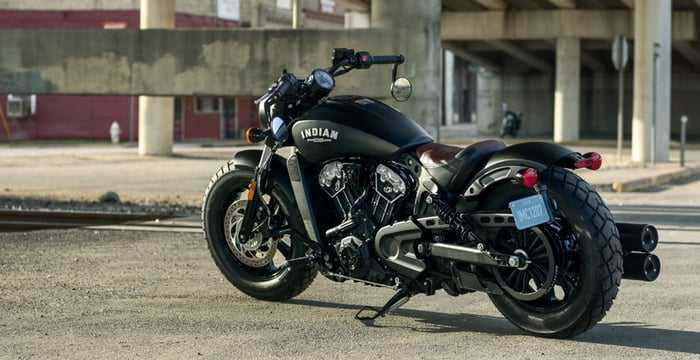 While so-called "bob-jobs" began emerging in the 1920s and 1930s, it was servicemen returning after World War II who caused the real proliferation of stripped-down, deconstructed motorcycles that would widely become known as bobbers.

British-made Triumph motorcycles became the bikes to bob, and though choppers eventually replaced bobbers as the popular customized bike, the bobber remained the original, and Polaris' new Scout Bobber definitely harkens back to those early motorcycles. There's an outlaw image to it that rebels against the corporate weekend warriors riding their chromed out machines.

Scaled down for action

Cropped, chopped, and stripped -- shortened fenders, a lowered suspension, minimalist design aesthetics -- the Indian Bobber features "tracker" handlebars, or the same low-rise bars often used for flat-track racing;  foot pegs that have been moved 1-1/2 inches closer to the rider, which gives the bike an overall dark, raw look and feel; and a low-slung, blacked-out form from the wheels to the pipes, a design choice increasingly common on bikes targeted to younger riders. 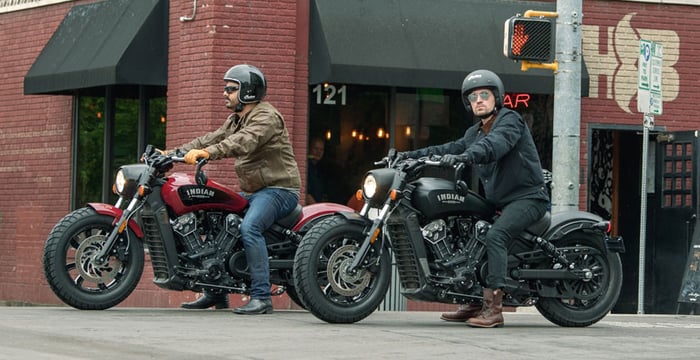 The Bobber has chopped fenders, front and back; knobby, fat, and deeply treaded tires; and the Scout's 100-horsepower, 1,131-cubic-centimeter liquid-cooled, fuel-injected V-twin engine. Other styling bits include a two-tone leather seat and block lettering on the fuel tank, which actually supports the low-slung attitude of this bike that screams to go ripping around city streets on.

A new rider is emerging

With the Scout platform, Indian is giving riders new to the sport or the brand a range of choices, both in price and styling. The original bike introduced in 2015 was tethered to Indian's historic look; the Scout Sixty, introduced last year, was a lower cost version. Now the Bobber, which is priced the same as the original, gives the platform its urban appeal.

The well-off, middle-aged male is fading as a core customer not only for Harley-Davidson but for Polaris as well. Aging baby boomer bike owners are declining faster than the rest of the population, and fewer younger people are buying bikes.  Despite the continued demand for Indian Motorcycles, which the bike maker said enjoyed 17% growth in the second quarter, big, expensive bikes costing $20,000 to $30,000 or more are becoming a harder sell. While Polaris has produced a number of high-priced bikes, it is willing to engage in discounting to grab sales and market share. Harley has largely refused to do that, which helps explain the discrepancy in the directions in which the businesses are heading. 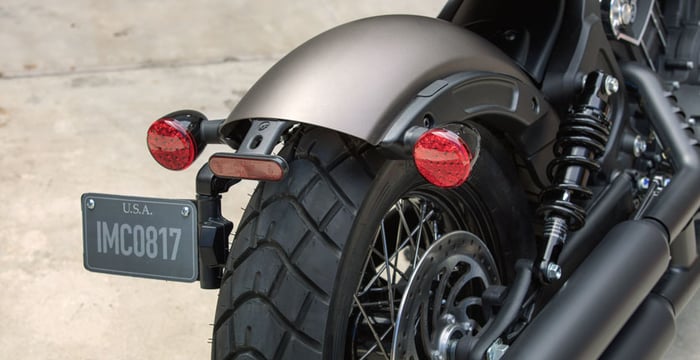 However, Harley-Davidson knows it needs to attract new, younger riders, and it has made a commitment to do that, both for itself and for the industry in general, such as having given away free riding lessons to military and first responders at its dealer academies, but using its Street 500 bikes as the ones riders learn to ride on.  Part of the rationale behind the rumored interest in Ducati is based on it being a brand young riders would be attracted to. But a high-priced, limited-production Italian sports bike is not likely going to bring more new riders to the brand or the industry.

Harley-Davidson would probably be better served by going in a completely different direction, and with Polaris Industries designing bikes like the Bobber, it may need to if it wants to keep its rival from peeling off more customers and market share.