Consumers around the world are making healthier choices about the snacks they eat. According to Nielsen, 70% of those survey respondents make dietary choices to prevent health problems like high cholesterol, obesity, or diabetes. As a result, Mondelez International (NASDAQ:MDLZ) has had to adapt to changing tastes. But despite shrinking revenue, the stock is up about 60% over the last five years.

On the bottom line, the company has been able to expand margins, growing non-GAAP earnings per share 39% since 2012. Management's goal to squeeze cost savings out of the business in order to boost profitability continues to leave shareholders relatively satisfied.

Looking ahead, here are three key metrics that will help investors understand what drives results at Mondelez. 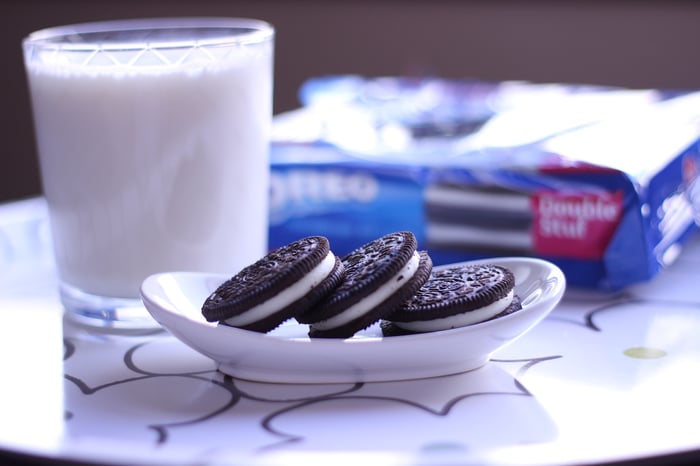 If you look at the company's reported GAAP net revenue, you'll see a huge decline from $34 billion in 2014 to $26 billion in 2016. That might paint a dire picture, but what investors need to focus on is organic net revenue. This is a non-GAAP metric provided by the company that excludes the impact of foreign exchange, acquisitions, and divested assets.

Mondelez has actually been shedding underperforming and nonessential assets, such as its coffee business, in order to focus more on its core brands like Oreo, belVita, Halls, and Trident, which offer the best growth and margins. Organic net revenue shows how the company's ongoing operations are actually performing year to year:

From the table above, you can see that even on an organic basis, grow for Mondelez has been muted. The culprits are developed markets like North America and Europe, where organic net revenue increased less than 1% in 2016, compared to 2.7% in emerging markets. In North America, the snack food giant is facing an avalanche of consumer shifts in taste and preference when it comes to snacking. So while the snack industry is expected to grow 5.8% annually through 2022, sugary fare from Mondelez isn't part of the trend.

Management is addressing the challenge with new products made without unpopular ingredients like hydrogenated oils and high-fructose corn syrup. The company is making progress -- it's new GOOD THiNS brand was the No. 1 snacking brand in the U.S. in 2016 with $70 million in sales.

Mondelez has other health-focused snacks rolling out to store shelves this year to boost growth in North America. For the first half of 2017, organic net revenue was down 5% year over year, the only region to post negative growth for the company. Part of this stemmed from a recent malware attack which kept the company from being able to ship orders the last four days of the second quarter.

The company also has a key competitive advantage from its vast direct-store-distribution system in North America, which management wants to leverage further going forward. The success of these new well-being snacks will be important, and investors should follow progress in the region to get a sense of how well Mondelez can adapt its products to changing consumer tastes.

Despite headwinds on the top line, management has been delivering on their goals to improve efficiency and margins, which is juicing earnings per share. Again, as with revenue, it's important for investors to look at the company's non-GAAP adjusted margin and adjusted earnings per share figures, because they strip out the one-time gains and losses from divested assets:

Mondelez has been investing heavily in its supply chain and distribution system to develop some of the advantages it has in North America in other regions. Over the last five years, adjusted operating margin has increased from 12% to about 16% as the company becomes more efficient and focuses its efforts on the best-performing brands. Management is targeting a 17% to 18% adjusted operating margin by 2018.

If North America can accelerate its growth, while the company continues to expand the bottom line, Mondelez stock should continue to deliver positive returns for shareholders.