It's fair to say that Alphabet (NASDAQ:GOOG) (NASDAQ:GOOGL) subsidiary Google's Android Wear smartwatch platform has been a flop. Released in early 2014, Android Wear pre-empted Apple's (NASDAQ:AAPL) entry into the smartwatch market, Apple Watch, which was unveiled later that year but wouldn't go on sale until early 2015. Since then, Android Wear devices have languished as third-party original equipment manufacturers (OEMs) slowly step away from the platform. Android Wear had an 18% market share in the second quarter, compared to watchOS' dominating 51% share, according to Strategy Analytics.

Fitbit (NYSE:FIT) is now preparing to enter the smartwatch fray with its new Ionic. Can Fitbit pick up Android Wear's slack? 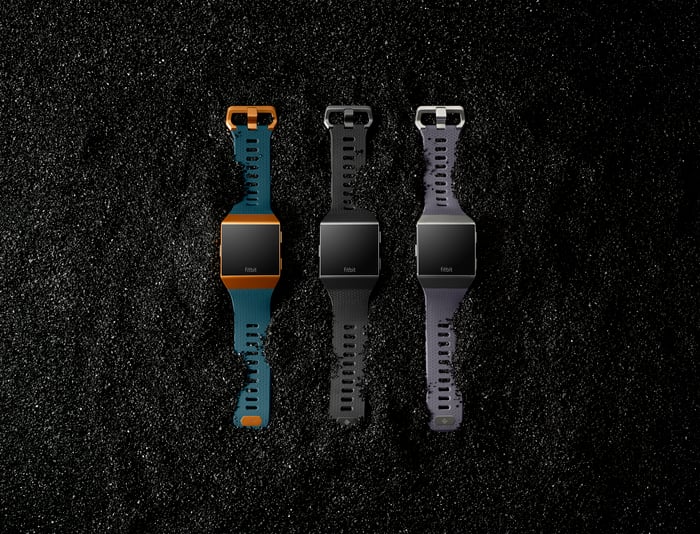 One Street analyst thinks the answer is "yes"

Raymond James analyst Tavis McCourt is out with a research note (via Tech Trader Daily) expressing optimism over the new product that was unveiled yesterday. The Ionic is unlikely to hurt Apple Watch much, but it can take advantage of the opening that Android Wear has left, according to the analyst. McCourt has an outperform rating on Fitbit shares, and believes the company could enjoy meaningful revenue upside next year if Ionic is received well.

On paper, Ionic checks off the most relevant items that a prospective smartwatch buyer looks for: fitness tracking, water resistance, mobile payments, notifications, and third-party app support (currently limited to a handful of apps). Ionic does have Apple beat on battery life, though, which is a critical specification for a wearable device.

One of Apple Watch's greatest weaknesses is its paltry one-day battery life, which calls into question Apple's ability to ever offer sleep-tracking capabilities. Apple acquired Finnish sleep-tracking start-up Beddit in May, but that company made small devices that you place under your sheets, not wearables. All we can say is that sleep tracking is on Apple's wish list, but it's not clear how it will offer such functionality. With four-day battery life and a new SpO2 sensor, Ionic offers sleep tracking and is hoping to help recognize conditions like sleep apnea.

McCourt believes that Fitbit has all of the pieces in place, and it will all boil down to execution after Ionic launches in October:

Success on this product will depend on quality at launch, which can oftentimes be an issue for companies entering new computing/consumer electronics markets. A new OS, new app store, multiple new apps, a complex music download process, along with new sensors in a new hardware package make execution difficult, but if the product quality is high and usage is relatively simple, Fitbit has an opportunity to essentially hold the smartwatch market position that has been vacated by Android given the poor quality and consumer acceptance of Androidwear smartwatches.

Google appears to be tapering down its own investments in Android Wear. The release of Android Wear 2.0 in February of this year was underwhelming, including very few new features and announced with little fanfare. Unless Google and its OEM partners start to take Android Wear more seriously, the platform's market share will only continue to shrink. Fitbit definitely has a chance here to make a dent, particularly as its new Fitbit OS is cross-platform compatible and could appeal to Android users, while Apple Watch is exclusive to iOS users.