Now that it seems Republicans are moving on from trying to pass healthcare legislation (for now), the focus is shifting to tax reform, with an ambitious goal of enacting tax legislation by the end of the year. Whether we get broad tax reform or just some tax cuts remains to be seen, but there are several companies that could be big beneficiaries of a lower corporate tax rate, a foreign profit repatriation holiday, and lower taxes on the middle class.

With that in mind, here are three companies that could be big winners of tax reform, if it happens. 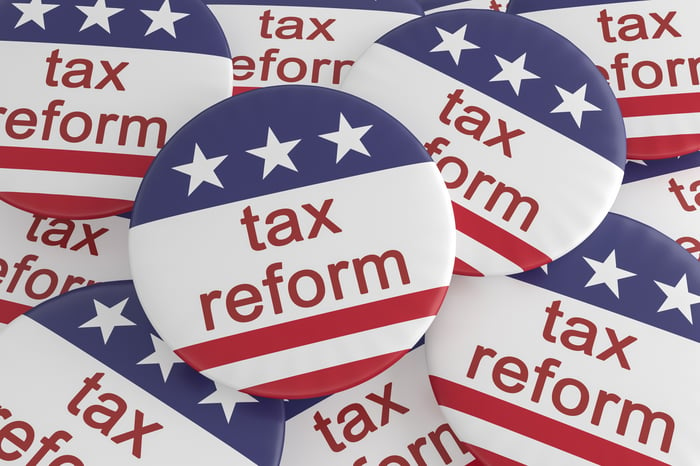 Repatriation could be the most dramatic tax cut

As the current tax law stands, companies that repatriate foreign profits pay federal tax at a rate of 35%. However, tax plans put out by President Trump and Republican leaders in Congress call for a temporary "repatriation holiday" with a dramatically reduced rate. The exact proposals differ slightly, but a rate of 10% seems to have significant traction.

This could mean a big windfall for companies that keep a lot of cash stashed overseas for the specific purpose of avoiding repatriation taxes. And no company has more cash overseas than Apple (NASDAQ:AAPL), which finished the second quarter with $261.5 billion in cash, the vast majority of which (over $230 billion) is parked overseas.

So, if a 10% repatriation holiday were to be implemented, it could save Apple about $58 billion in taxes, which could be a big positive catalyst for the stock. Not only would it pay a reduced tax bill, but it would then have around $200 billion of usable cash that it could use to reinvest in its business, buy back shares, or pay a higher dividend to shareholders.

In addition, if the standard corporate tax rate is lowered to 15% or even 20%, Apple could benefit from ongoing tax savings on its foreign profits.

Finally, Apple could also benefit indirectly from lower personal income tax rates on the middle class, as people would have more disposable income to buy iPhones, iPads, and iMacs.

Revenue generated in the U.S. -- from middle-class Americans

Another category of tax reform beneficiaries includes companies that derive most of their revenue from U.S. consumers. These companies are taxed at the current federal rate of 35%, plus any applicable state and local taxes.

Southwest Airlines (NYSE:LUV) is a good example of a highly taxed company that could benefit tremendously from a lower corporate tax rate. Virtually all of the airline's sales are domestic (99%), and the company's 10-year average effective tax rate is 38%. Depending on what the corporate tax rate actually ends up being, tax reform could easily add hundreds of millions of dollars to the airline's profits each year.

In addition, keep in mind that as a discount airline, Southwest is highly dependent on middle-class travelers. The Trump administration has made clear that a middle-class tax cut is a main focus of any reform package, so a boost to the middle class' spending power could also be a boost to Southwest Airlines' revenue.

A lot of offshore cash relative to its market cap

Apple certainly has the most offshore cash of any U.S. company, and a repatriation holiday could certainly be a great thing for its shareholders.

Strategas Research Partners published its Strategas repatriation index of the companies with the most offshore cash relative to their market capitalizations. One company on the list was heavy equipment manufacturer Caterpillar (NYSE:CAT), which has $7.7 billion in overseas cash as of the most recent quarter.

In addition to benefiting from a repatriation holiday, Caterpillar could also be a major beneficiary of President Trump's proposed $1 trillion infrastructure spending plan.

If a repatriation holiday does happen, historical data suggests that Caterpillar stock could be a major outperformer. In fact, Strategas also said that companies that repatriated the most offshore cash relative to market cap during the last repatriation holiday in 2004 quadrupled the S&P 500's performance in the following year.