T-Mobile (NASDAQ:TMUS) CEO John Legere has a flair for the dramatic. When it comes to company announcements, he tends to borrow equally from Steve Jobs and Vince McMahon.

Every major move the wireless carrier makes is treated like an event, and that was no different for the company's latest Un-carrier news. The company built anticipation for what it called "an announcement you won't want to miss" with a countdown clock, and a promise to share "what's next for the Un-carrier and how the company will continue to change wireless for good."

That's a lofty promise, but one the company has delivered on in the past. Legere certainly sets the bar high for himself, and in this case, you can argue his company again cleared it. 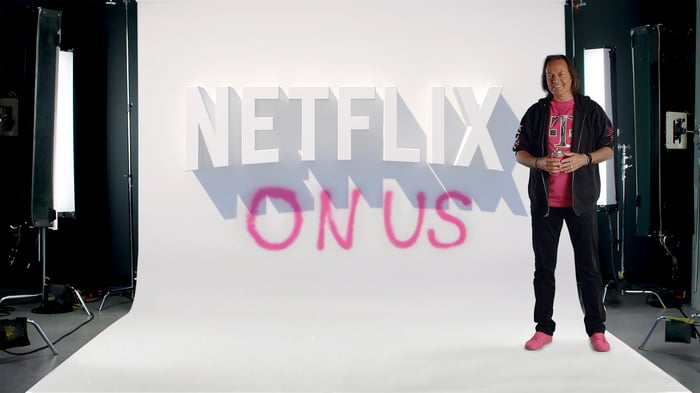 Here's what T-Mobile is doing

T-Mobile has decided to give every person on its family plan Netflix (NASDAQ:NFLX) for free. The offer, called "Netflix On Us," begins Sept. 12, and existing customers can activate their subscription online, in-store, or by calling T-Mobile customer service.

"How's that for an Un-carrier move?" said Legere in a pre-recorded opening to the media event.

To get Netflix T-Mobile customers need two or more paid voice lines on the carrier's normal T-Mobile One plan. The offer does not apply to people who have the company's two for $100 special offer or its Unlimited 55+ plan. People on those plans can switch to one in order to get the free "Netflix On Us."

The offer covers a standard Netflix subscription which costs $9.99 a month.

"The future of mobile entertainment is not about bolting a satellite dish to the side of your house or resuscitating faded 90s dot-coms," said Legere, clearly taking a poke at his rivals. "The future is mobile, over-the-top and unlimited."

T-Mobile made a point to have multiple executives point out that there is "no catch" to the offer during the media event. Legere said that his company was doing this to show that not all unlimited plans are equal.

"While the carriers spend billions on their franken-strategies to cobble together carrier–cable–content mashups, the Un-carrier just leapfrogged them all by partnering with the best and giving it to customers at no extra charge," Legere said.

Existing Netflix customers will be able to shift it so T-Mobile pays for their existing subscription. No specific terms of the agreement between T-Mobile and Netflix were released during the event or in the accompanying press release. T-Mobile will be paying Netflix for its content and acknowledged it will not be getting a major discount, but the company did not detail what it would be spending per user.