When, in 2010, Oclaro (NASDAQ:OCLR) acquired optical networking supplier Mintera for $12 million in cash plus other incentives, it laid the groundwork for what would become one of its most successful upstart competitors: Acacia Communications (NASDAQ:ACIA).

"Oclaro's acquisition of Mintera is the latest in a series of strategic moves to increase our addressable market, better serve our customers, and outdistance our competition," said Alain Couder, former president and CEO of Oclaro, in a press release at the time. "Through this acquisition, Oclaro has taken another important step forward in building upon our leadership position in 40 Gbps [gigabit per second] regional and metro networks by broadening our product portfolio and systems expertise to expand into 40 Gbps LH [long haul] and the 100 Gbps Coherent markets."

Translation: Mintera is going to allow us to serve bigger networks with faster service over longer distances. Sounds good, right? There's just one problem: Key members of the team that developed Mintera's technology, including founder Benny Mikkelsen, had already started work on Acacia the year before the Oclaro deal. 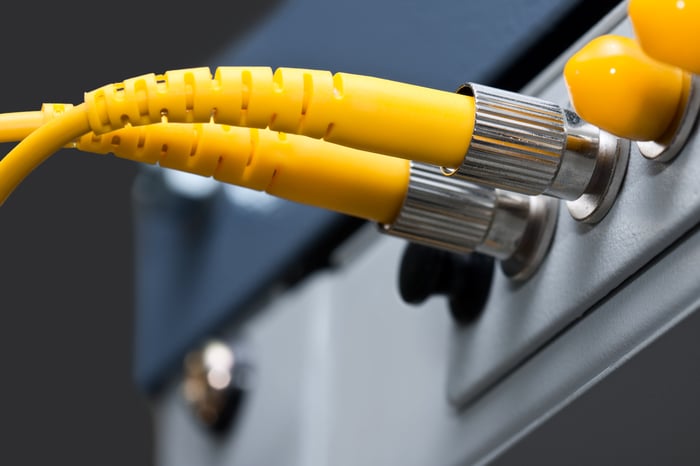 Located in Boston's historic tech corridor, Acacia would gross $374,000 in 2010 sales, the same year Oclaro was paying millions to acquire its predecessor company. Mikkelsen, as Mintera's founder, presumably received the bulk of the gains from selling, but cash wasn't all he took. He also partnered with Mintera colleagues Mehrdad Givehchi and Christian J. Rasmussen to create the first Acacia Communications products, which, from the get-go, were designed to connect optical networks using standard silicon connections.

The idea is simpler than the execution. Here's the basic gist:

Acacia Communications simplifies the process by taking data from lasers and moving it between devices using standard silicon chips. And those chips can work with virtually any form of optical networking equipment and also plug into existing networks that aren't designed to transmit data with laser beams.

Global growth and an IPO

Investors liked the story, and for good reason. Instead of relying on an overextended North American market, Acacia found big customers in China and Europe that needed to build out a fiber infrastructure to upgrade the Internet and provide better connectivity for their burgeoning populations. To this day, China's ZTE accounts for over a third of revenue.

Where we are now: struggling with quality issues, but with hope for the future

Investors aren't as thrilled with the story as they used to be. Acacia Communications stock is still down over 29% year to date despite a 12% rally in August. Quality issues are part of the problem. Specifically, Acacia had an issue with a contract manufacturer of its chip products in Q1 and as of Q2 was in the process of ramping up production to replace problematic components while serving new customer demands.

"We are in the process of implementing enhanced quality initiatives, internally and with our suppliers and contract manufacturers. As we continue to scale rapidly with new products, we believe these enhanced quality initiatives will help prevent this type of a quality issue in the future," Acacia CEO Raj Shanmugaraj said in comments made to analysts in the Q2 conference call, according to a transcript made available by S&P Global Market Intelligence.

If that sounds like good news, you wouldn't know it from the valuation. Acacia Communications stock trades for less than 15 times earnings despite a long history of growing per-share earnings over 100% in all five quarters prior to the most recent. Even a return to modest growth should send the stock soaring once more, proving Mikkelsen, Givehchi, and Rasmussen were right to leave Oclaro's nest when they did.