Electronic Arts' (NASDAQ:EA) Ultimate Team EA Sports branded games -- FIFA and Madden NFL -- are making tons of money for the game maker to the tune of $832 million in the fiscal year 2017. The problem EA management is trying to solve is how they can grow Ultimate Team revenue even more. One answer has been esports, in which Ultimate Team serves as the gateway to competitive gaming for EA's sports franchises. And EA just found a powerful new partner to up the ante for its Madden Championship Series esports tournament.

What is the Madden Championship Series?

The Madden Championship Series is an esports tournament for EA's top selling Madden NFL franchise. The series is comprised of two events that make up what's called the EA Majors -- Madden Classic and Madden Challenge. Now, EA and the NFL are teaming up to create a new competitive gaming tournament that will be the third event in the EA Majors called Madden NFL Club Championship. 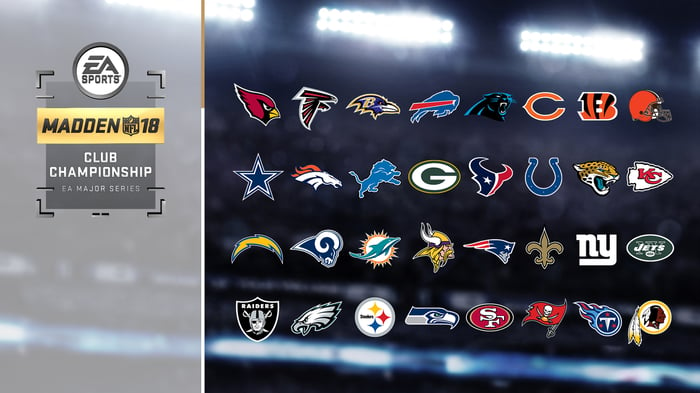 EA launched esports tournaments for both FIFA and Madden NFL for the first time in the fiscal year 2017. More than 10 million players participated last year across both sports titles for a chance to win a piece of a big cash prize. This year's Madden Championship is awarding $1.153 million to the finalists of the three EA Majors.

The Madden NFL Club Championship event is unique in that all 32 NFL teams are participating, with each qualifying Madden player representing one of 32 NFL teams in the Live Finals. The finals will start at the Pro Bowl in Orlando, with the championship match held at the Super Bowl Experience Driven by GMC in Minneapolis. It's the largest ever commitment by a traditional professional sports league in esports.

The announcement of the Madden Club Championship coincides with the release of Madden NFL 18 -- the officially licensed football game of the NFL. The EA and NFL partnership follows a similar one announced earlier in the year between the NBA and Take-Two Interactive (NASDAQ:TTWO) to create the NBA 2K eLeague -- a professional esports league based on Take-Two's top selling NBA 2K franchise -- the officially licensed basketball game of the NBA.

Why are professional sports leagues so interested in video games?

Esports -- which is turning competitive gaming into a spectator sport -- has a huge fan base numbering more than 300 million and is growing fast. According to Newzoo, esports revenue is expected to grow about 35% per year through 2020 and reach $1.5 billion. This amount is mainly comprised of brand investment for advertising, sponsorship, and media rights. The appeal for big brands is the demographic that esports attracts -- millennials, a coveted audience for big brands, including traditional sports leagues like the NFL.

Lately, NFL and NBA team owners have been getting more involved in video games by investing in esports. Most notably, New England Patriots owner Robert Kraft's recent purchase of an esports team in Activision Blizzard's (NASDAQ:ATVI) Overwatch League. It's basically a way for sports team owners to stretch their horizons and diversify revenue streams, as well as meet millennials where they are spending more of their time.

In the announcement with EA, NFL Commissioner Roger Goodell had this to say:

Competitive gaming and esports are one of the most exciting ways to engage a larger, younger and digitally savvy NFL audience. Collaborating with EA to create the Madden NFL Club Championship presents a unique opportunity to capture the excitement of NFL action and the passion of our fans with competition that anyone can participate in.

What does Electronic Arts get out of it

EA has designed the online competitive gaming mode in its sports titles -- FIFA and Madden NFL -- to go through the Ultimate Team virtual card game. In Ultimate Team, Madden players can purchase in-game card packs that unlock real life NFL stars that gamers use to build their fantasy football team, which is then used in online competitive games with other players. It's highly addicting and helps EA build very high engagement with the player base because it taps the competitive nature of gamers who want to win. A $1.1 million cash purse can certainly help, as well.

EA generated 17% of its total revenue last year from Ultimate Team alone, so you can start to see the rationale here. An officially sponsored esports event with the NFL, with a huge cash prize dangling in front of Madden players, is a great way to encourage higher engagement among the player base and grow revenue from in-game spending within Ultimate Team.