Shares of Intercept Pharmaceuticals (NASDAQ:ICPT), a commercial stage biotech focused on liver diseases, declined by 17% as of 10:30 a.m. EDT Tuesday. The fall is attributable to a letter that was sent by the company's Chief Medical Officer to the medical community which urges physicians to adhere to the FDA-approved dosing schedule for the company's one and only product Ocaliva.

Ocaliva was approved by the FDA in May 2016 to treat primary biliary cholangitis, a rare liver disease that results in the gradual destruction of the bile ducts.

While sales of Ocaliva have grown rapidly since launch, Intercept's Chief Medical Officer Dr. David Shapiro recently sent a letter to healthcare providers that urges them to stick to the product's strict FDA approved dosing schedule.

Here's a look at a few of the key phrases from the letter that have put traders on edge today:

Liver injury, liver decompensation, liver failure, and death have been reported in patients with moderate to severe hepatic impairment when OCALIVA was dosed more frequently than recommended in labeling for such patients. In addition, serious liver adverse events have been reported in patients initiating therapy without cirrhosis or with mild liver impairment. Liver related adverse events have occurred both early in treatment and after months of treatment.

Shapiro went on to offer providers the following guidance:

Health care providers should exercise a low threshold for drug discontinuation or interruption, based on laboratory, imaging and/or clinical evidence of toxicities. There is no immediate risk in temporary discontinuation of OCALIVA, but there is potentially significant risk associated with continuing treatment without a complete evaluation of physical and biochemical parameters for evidence of liver injury.

Given the update, it is easy to understand why shares are selling off hard on Tuesday. 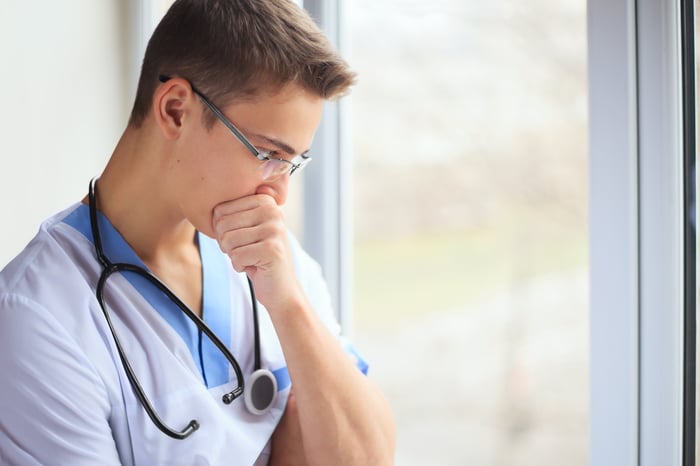 The last few months haven't been kind to Intercept's shareholders. Roughly six weeks ago investors learned that a patient in a phase 2 NASH study evaluating Ocaliva had died. While the company stressed that an independent investigation showed the patient death wasn't attributable to Ocaliva, that didn't stop the stock from taking a major hit. Tuesday's news only exacerbates the worry that Ocaliva might have serious safety issues.

Does Tuesday's drop represent a buying opportunity for risk-loving investors? While I admit that Intercept's massive opportunity in NASH could justify a small investment, Tuesday's update amps up the risk profile of an already risky company. For that reason, I'm content to sit on the sidelines until we learn more about this situation and see top-line data from the company's phase 3 Regenerate study, which is scheduled to be released in the first-half of 2019.

In the mean time, it is worth noting that Intercept's management team will be giving a presentation Tuesday at 11:45 a.m. EDT at the Morgan Stanley 15th Annual Global Health Conference. Bulls and bears alike will want to listen in to learn how management is responding to this situation.