Operating conditions in the offshore drilling industry have been abysmal over the past few years. While the worst appears to be over, it could be years before the sector recovers, and that's assuming oil prices head higher. That said, for investors with a long-term mindset and a bullish view on crude prices who want to start dipping their toe in the water, Seadrill Partners (OTC:SDLP) and Transocean (NYSE:RIG) are two options worth considering. Both companies have healthy revenue backlogs and liquidity positions, which should help keep them afloat until conditions improve. That said, after drilling deeper into these two companies, it's clear that Transocean is the better option to buy.

Transocean's fleet has undergone a significant transformation over the past few years. Before the downturn, the company controlled an industry-leading 87 offshore drilling vessels. However, it has since retired 33 older rigs, sold its entire jackup fleet, and made two fleet acquisitions. As a result, its current fleet -- including those under construction or contract -- stands at 55, the bulk of which are newer, more valuable ultra-deepwater and harsh environment rigs. That said, what's important to note about Transocean's fleet isn't its size but the backlog supporting those vessels. Currently, the company has an industry-leading backlog of $14.3 billion, which provides it with clear cash flow visibility for the foreseeable future since many of those contracts stretch out several years. 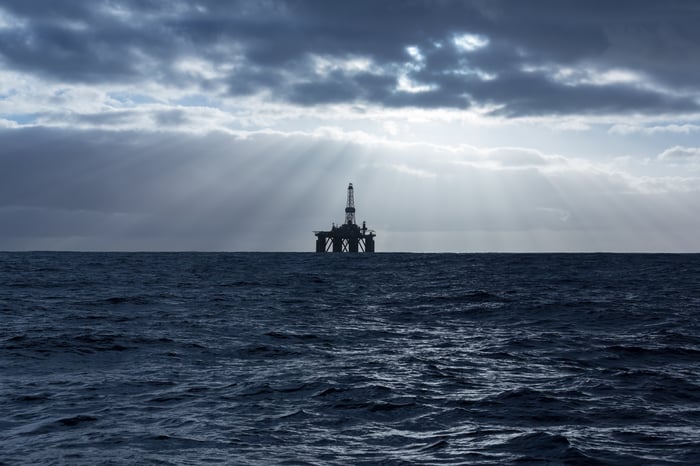 Contrast that profile with Seadrill Partners, which only has 11 vessels in its fleet. While contracts also underpin most of those rigs, the average remaining length is just one and a half years while the total revenue left in the backlog is only $1.9 billion. While that does provide Seadrill Partners with some near-term certainty, it doesn't have anywhere near the line-of-sight on future revenue as Transocean.

In addition to repositioning its fleet, Transocean has undertaken several initiatives to shore up its financial situation, which the company detailed on the following slide:

As that chart shows, the robust cash flow from Transocean's backlog, when combined with cash on hand, is more than enough money to manage its liquidity needs for capital expenditures and debt maturities through 2019. Because of that, the company should have no problem staying afloat while the industry gets back on its feet.

Seadrill, likewise, appears to have ample liquidity for the near term. The company ended last quarter with $919.1 million in cash. Further, it recently completed the amendments to three secured credit facilities that extend the maturity dates by two and a half years. Because of that, the company deemed that its financial situation was on solid enough footing to reinstate its quarterly distribution. Though, that decision might come back to bite the company if it can't add to its backlog, especially considering it still has $2.7 billion of net debt outstanding.

More cushion during these uncertain times

Thanks to their contract backlogs and liquidity positions, Transocean and Seadrill Partners shouldn't have any problems staying afloat over the next few years, which should bridge the gap until industry conditions begin to improve. That said, Transocean has a much more robust backlog, which gives it greater revenue visibility beyond 2019 just in case the recovery remains at bay. This factor, in my opinion, makes it the better buy between the two for investors brave enough to dive into the offshore drilling sector these days.