Shares of Compass Minerals International (NYSE:CMP) slumped on Friday, falling more than 12% at 2:30 p.m. EDT. Driving the sell-off was an announcement by the company that it's Goderich rock salt mine in Ontario would be operating at a reduced rate for the next few weeks due to an incident. As a result, the company will take a hit to its bottom line.

Compass Minerals reported that geological movements at the mine caused a partial ceiling collapse earlier this week. While there were thankfully no injuries, the incident did damage a portion of the company's main conveyance system. As a result, it would operate at a reduced rate for the next six weeks. 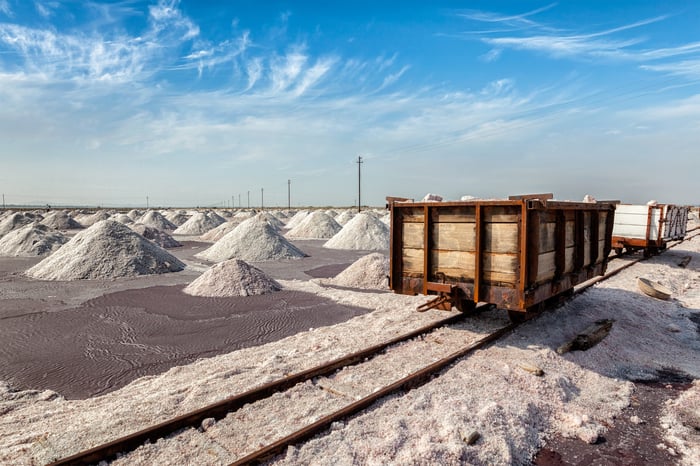 In addition to that issue, the company also noted that plant nutrient volumes in Brazil continue to lag expectations this season. Because of that, the company expects sales volumes within its South American plant nutrition segment to be at the lower end of its guidance range. Add that in with lower volumes and higher costs from the Goderich mine, and the company had no choice but to reduce its full-year earnings guidance. Compass Minerals now anticipates earnings to be in the range of $2.50 to $2.80 per share, which is well below its previous $3 to $3.50 per share range.

Compass Minerals had already been dealing with challenging market fundamentals in its salt business that was putting downward pressure on prices. The company had hoped to offset some of that impact by delivering higher volumes, but it now can't produce as much as anticipated due to the ceiling collapse. Add in the continued challenges in its South American plant nutrition business and Compass could have more downside, especially if earnings come in at or below the lower end of its new guidance range due to a further deterioration in market conditions.