Every year, Vail Resorts (NYSE:MTN) goes through the same seasonal fluctuations that most of its ski-resort-operator peers endure. Even though the company has taken steps to encourage summer visits and has also taken on an Australian ski resort that enjoys Southern Hemisphere winters beginning in June, investors can generally count on the summer quarter each year to be a tough one for Vail Resorts' bottom line.

Coming into Thursday's fiscal fourth-quarter financial report, Vail Resorts investors had no expectations that the company would avoid its typical red ink, but they did want to see evidence of solid revenue gains and encouraging early sales of season tickets for the coming ski season. Vail's losses weren't as bad as anticipated, but revenue gains didn't live up to expectations, and some worry that the resort operator's fiscal 2018 projections suggest slowing growth for the future. Let's take a closer look at Vail Resorts to see what the company said. 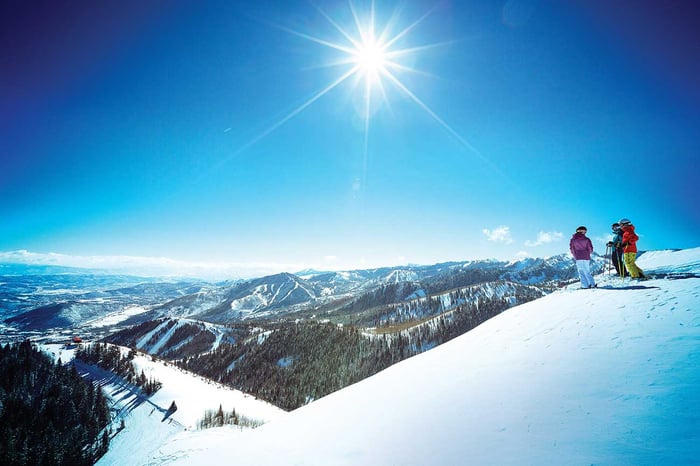 Vail Resorts' fiscal fourth-quarter results reflected normal seasonality. Revenue came in at $209.1 million, up 16% from year-ago levels, but slightly less than the consensus forecast among those following the stock. Net losses amounted to $57.1 million, which was about 12% narrower than this time last year, and the resulting per-share loss of $1.43 was a big improvement compared to the $1.81 per-share loss that most investors were looking to see.

Vail didn't spend much time talking about the fiscal fourth-quarter numbers, focusing instead on how fiscal 2017 went, on the whole. In the key mountain segment, total lift revenue jumped 24%, with 18 percentage points of that growth coming from Whistler Blackcomb. Skier visits were up by a fifth, to 12 million, but U.S. resort visits were actually down 5%.

Vail blamed poor early season weather in Colorado and the late Easter holiday for the domestic decline in traffic. Figures for ski-school revenue, dining, and retail and rental proceeds were generally up 20% to 25%, but organic growth, excluding Whistler, was minimal. Segment pre-tax operating earnings were up by a third, as expenses rose at a slower pace than revenue.

The lodging segment was, once again, weaker. For the year, net revenue was up less than 1%, with declines in occupancy rates offsetting stronger average daily rates at company-owned properties. The real estate segment suffered a decline of nearly a quarter compared to fiscal 2016.

CEO Rob Katz was excited about how the year went. "With a strong high-end consumer," Katz said, "we are continuing to leverage our growing network of resorts and sophisticated marketing strategies to drive guest spending across our mountain segment." The CEO also noted how geographic diversification is helping to smooth out company results, while also enhancing the value of its season-pass programs.

What's ahead for Vail Resorts?

Vail's early look at pass sales for the 2017-2018 season is encouraging. Through Sept. 24, pass sales in North America are up 17% by unit volume and 23% in dollar terms, with a big marketing push tied to the Labor Day holiday contributing substantially to Vail's overall success. With both Whistler and the newly acquired Stowe resort in Vermont now part of the Epic Pass and Epic Local Pass products, Vail believes that skiers and snowboarders are excited about locking in attractive early rates.

The resort operator is also looking for strong results in fiscal 2018. Net income should come in between $234 million and $272 million, with pre-tax operating profit for the resort segment in a range of $652 million and $682 million. Whistler, in particular, should remain strong, and the company hopes that more favorable early season conditions in Colorado, and a more favorable placement of key holidays, will bring improvement compared to Vail's fiscal 2017 numbers.

Nevertheless, Vail Resorts investors didn't look far past the red ink for the usually sluggish fiscal fourth quarter, and the stock sagged 3% on Thursday following the announcement. Long-term investors know to look forward to the winter months, and Vail Resorts appears to be executing well on its overall strategy of expansion.