Nike Inc. (NYSE:NKE) could use some air these days.

Revenue at the Swoosh increased just 0.1% in its most recent quarter, its worst quarterly sales growth in almost seven years. Sales in North America, its biggest market, fell 3% as the company lapped a quarter that included the Olympics and the Euro Cup, but Nike is clearly struggling at home with the broader retail upheaval. Key partners like Foot Locker (NYSE:FL) and Finish Line (NASDAQ: FINL) are seeing sales plummet, and several other sporting goods retailers have declared bankruptcy, adding to the industry's problems.

Adding to its troubles, rival adidas (OTC:ADDY.Y) is ascendant, and it even passed Nike's Jordan brand as the No. 2 sneaker brand in the U.S this year for the first time, according to market research firm NPD Group. Adidas also claimed the top-selling sneaker in the U.S. last year with the Superstar, the first time it did so in a decade.

How Nike hopes to get its groove back

Against that backdrop, Nike has made several moves to revamp sales. In June, it said it would begin selling directly on Amazon.com and crack down on third-party sellers on the site. It also said it would lay off 2% of its staff, or about 1,400 employees, and launch its Consumer Direct Offense strategy. That strategy includes speeding up its innovation as well as the time it takes to bring new products to market, and also increasing direct selling to customers through online platforms and its own stores.

While that plan sounds good, the company's guidance calls for sales to continue to contract in North America. However, there is one catalyst coming soon that could spark sales for the sneaker king. 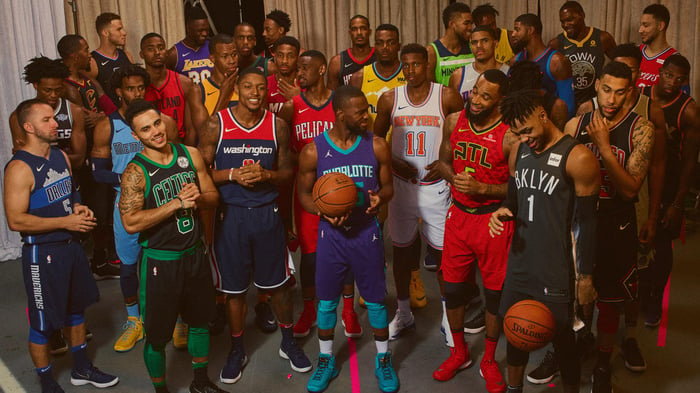 NBA players from each team show off the Statement edition of Nike's new jerseys. Source: Nike.

Two years ago, Nike signed an eight-year apparel contract with the NBA for $1 billion, according to ESPN. Nike is paying annually more than triple what adidas paid over the 11 years that the German sportswear company held the contract, but there's an important difference. Nike's logo will appear on the new jerseys, the first time that's happened in NBA history.

With the logo deal, Nike has a huge opportunity to recharge sales in the sluggish basketball market. Though basketball is second to running as Nike's biggest category, in many ways it defines the brand -- Nike's rise to prominence took place in tandem with Michael Jordan's, who is still the company's most important pitchman.

Management touted the new jerseys on the recent earnings call, calling them the lightest and most breathable uniform ever worn in the league. For fans, Nike is introducing the first-ever connected jersey, Nike Connect, which allows wearers to gain access to messages from the player, player footage, exclusive product offers, and even a chance to win game tickets and meet the team. All they have to do is simply tap a tag on the bottom of the shirt with a smartphone. The company said it sees big potential in that kind of wearable tech in the years ahead.

Nike is also redesigning the styles, colors, and logos on many of the uniforms, which should help generate interest. Having the Swoosh on them will serve as a constant advertisment for the brand, helping it reassert its supremacy in basketball at a time when it's being challenged by adidas from one side and Under Armour (NYSE:UA) (NYSE:UAA) and Stephen Curry from another.

Nike CEO Mark Parker called the NBA partnership a "massive commercial opportunity," and the launch of the connected jerseys this weekend should hopefully give the brand some much-needed buzz.

After such an underwhelming quarter, Nike shares deserved to take a dive. However, with the NBA season right around the corner and Nike's exclusive partnership about to take off, the Swoosh shouldn't be riding the bench for too much longer.