Google-parent Alphabet (NASDAQ:GOOG) (NASDAQ:GOOGL) has become one of the most valuable companies in the world thanks to its dominant search engine, related products like Adwords, YouTube, and Android, its mobile operating system.

Alphabet's advertising machine is set to generate more than $100 billion this year as user page clicks increase, though the cost-per-click has continued to decline -- YouTube engagement ads, which are outgrowing the platform, tend to have a lower cost-per-click.

In its financial reports, Alphabet classifies these moonshots as Other Bets, but those brought on less than 1% of revenue last year. With that in mind, let's take a closer look at Google's core businesses that really drive the company's results. 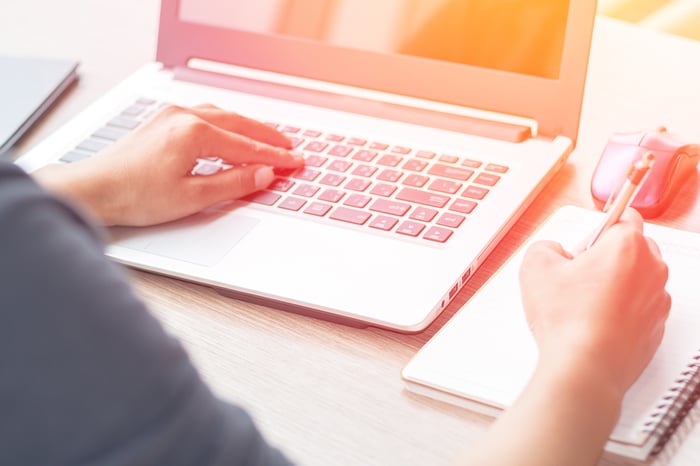 Google's products like Search, Android, Maps, and YouTube generally revolve around advertising, and the company divides its advertising business into two categories: performance and brand. Performance advertising is its primary source of revenue and includes businesses like AdWords, the company's auction-based ad program, which allows advertisers to buy text-based ads on properties like its search pages, and AdSense, which publishes ads on partners' websites.

Paid clicks surged last year by 40% due to increased adoption of YouTube engagement ads, improvements in ad formats and ad delivery, and expansion of products around the world. That increase was partially offset by a 13% decline in cost-per-click, tracking a pattern investors have seen for several years now.

Growth at Google Network Members' properties, which is driven by AdSense, was slower, growing by just 3.8% to $15.6 billion as revenue from AdSense declined, though that was offset by AdMob, Google's advertising platform for monetizing mobile applications. Paid clicks increased just 3% last year and cost-per-click fell 13%.

Finally, $10.1 billion in revenue last year came from other categories like apps and in-app purchases, hardware, and licensing fees. Revenue in the other category increased 41%, driven by the success of Google Play, hardware sales, and Google Cloud offerings.

Looking ahead, Google's revenue is likely to continue its solid growth as paid search clicks increase, and the company is investing in technologies like artificial intelligence and virtual reality. Google and rival Facebook (NASDAQ:FB) have come to dominate digital advertising, each one with its own strengths. With its detailed information on users, Facebook excels at ad targeting, while Google's ads are better applied to searches, such as product purchases or services. Increasingly, Amazon.com is also taking search market share from Google as it becomes the first stop for online purchases, which explains why Google is partnering with Wal-Mart on things like delivery and integration with Google Home.

And there's a real possibility of one of its other bets such as Google Fiber or Waymo, its automonous vehicle technology division, paying off. Waymo appears to be the most promising, as Google is considered the leader in such technology and the self-driving car market is estimated by some to be worth $42 billion by 2025.

Alphabet has been one of the most dependable winners on the stock market since its 2004 IPO. With its dominance of search, it has a strong base that can help fuel investment in promising new technologies, setting the company up for success further down the road.