It's getting a little more expensive for video buffs to Netflix (NASDAQ:NFLX) and chill. The leading streaming service is boosting the price of its most popular plan, according to tech blog Mashable. The price of the plan that costs $9.99 a month for high-def streaming on two devices at the same time will go up to $10.99 a month come November for existing accounts. Subscribers will be notified in two weeks. New subscribers are being hit with the new price point as of Thursday morning.

The cheaper plan that offers standard-def streaming on a single device will remain at $7.99 a month. The priciest of the three tiers that supports 4K video resolution and the ability to stream across four simultaneous devices is seeing its monthly rate go from $11.99 to $13.99.

The move may not seem necessary given the way that Netflix is growing with expanding profitability at the $9.99 monthly price. However, Netflix knows what it's doing. Let's go over the three reasons why the market's pushing the stock to new all-time highs on the news. 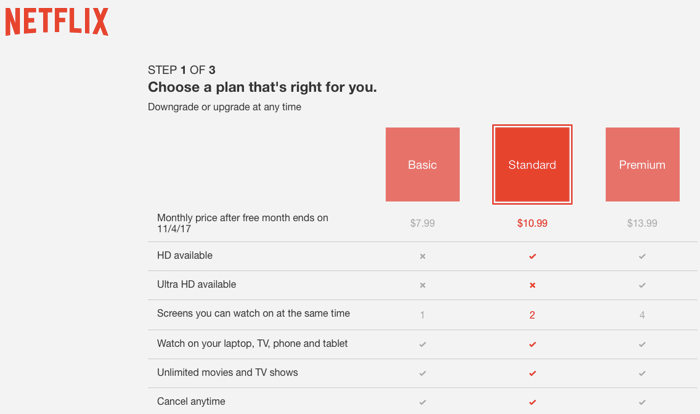 Netflix had 48.4 million global streaming accounts when it announced that it would be increasing its original rate of $7.99 for its most popular plan three years ago. The audience has more than doubled now to 104 million as of the end of June.

There's always the fear that Netflix will go too far. The difference between $9.99 and $10.99 is a hike of 25% relative to 38% off of its early 2014 pricing. However, as long as HBO Now is commanding $15 a month and over-the-top streaming television services commanding far more than that, it's hard to dispute with Netflix's logic.

2. The timing is brilliant

Netflix waited until just after the third quarter came to a close to roll out the new pricing, so this news won't have any bearing on Netflix's financial results in two weeks. It will also probably be too soon to weigh on its guidance, but if it does, it's with the understanding that any near-term slowdown in subscriber growth should be more than offset by big gains on the bottom line.

This is a scalable business, and while the money that Netflix spends on content keeps rising, the revenue that it's receiving is growing even faster. Netflix is spending $6 billion on content this year, and it expects that to grow to $7 billion next year. That may seem like a lot, but subscriber growth stacked on top of the new reality that they will be paying more per month is even greater.

The full impact of the hike will play out over several quarters, but for now, the timing is perfect. Making new subscribers pay up starting now also makes the decision to launch the second season of Stranger Things later this month that much more impressive.

3. Bears will need to rethink their models

Revenue and more importantly cash flow and earnings will be growing faster than bulls and bears were modeling. The hike itself may not be a surprise. Netflix had a similar increase in Canada two months ago and Australia a few months before that. However, now that it's official, you're going to see revenue targets move higher with even bigger adjustments on the bottom line.

There are a lot of people betting against Netflix. The 29.6 million shares of Netflix sold short as of mid-September were the most since late last year. I tapped Netflix as a "top stock" for October earlier this week, arguing that the heavy bearish activity could result in a short squeeze if we see blowout earnings on Oct. 16. We didn't have to wait that long. The price hike is doing the trick already.