"Dividend Aristocrat" just has a nice ring to it, doesn't it? The "dividend" part sounds great because it means a stock is going to pay you to own it. "Aristocrat" conveys nobility, an elite status that most don't have. Dividend Aristocrat stocks are magnets for income-seeking investors as a result of their sterling track records of dividend hikes.

The healthcare sector currently has the third-highest number of stocks in the Dividend Aristocrats, ranking behind only consumer staples and industrials. But some of these stocks are better than others. Here's why AbbVie (NYSE:ABBV), Johnson & Johnson (NYSE:JNJ), and Medtronic (NYSE:MDT) appear to be the best healthcare Dividend Aristocrat stocks you can buy right now. 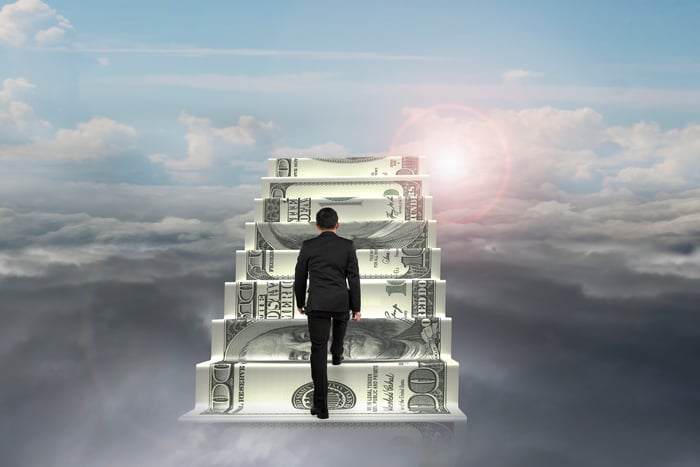 Although AbbVie technically didn't begin operations as a standalone entity until 2013, the big drugmaker qualifies as a Dividend Aristocrat because it was part of Abbott Labs during a 40-year period where its parent company increased its dividend annually. Over the last five years, AbbVie has kept up the tradition, boosting its dividend by 60%.

AbbVie's dividend currently yields just under 2.9%. That's on the low end of the yield over the past few years, but it's due to a great reason: AbbVie stock has soared more than 40% so far in 2017.

A big reason behind the stock's performance was AbbVie's recently announced deal with Amgen that keeps a major threat to top-selling drug Humira off the U.S. market until early 2023. AbbVie now appears to be in a good position to roll out new drugs from its deep pipeline, which should fuel additional growth, while not having to worry too much about a major loss of revenue for Humira.

Healthcare giant Johnson & Johnson has increased its dividend for a remarkable 55 consecutive years. Its yield now stands just above 2.5%. That's higher the the S&P 500 average yield of roughly 2%.

There shouldn't be any concerns at all about J&J's ability to keep the dividends (and the dividend hikes) coming. The company uses less than 55% of its earnings to fund the dividend program. Johnson & Johnson also generates an enormous cash flow that would allow it to pay out dividends even if earnings dipped -- which happened in the company's second quarter.

Although J&J faces some headwinds for its pharmaceuticals segment (the company's biggest moneymaker), those should be temporary. The company is managing loss of exclusivity for autoimmune disease drug Remicade better than many expected. It also has one of the best pipelines in the biopharmaceutical industry (as does AbbVie). In addition, J&J completed the acquisition of Actelion this summer, a deal expected to boost future revenue and earnings growth.

Medtronic claims a 40-year streak of annual dividend increases. What's even more impressive is that the big medical-device maker has grown its dividend during that period by a compound annual growth rate of 17%.

The company's dividend yield of nearly 2.4% narrowly trails that of J&J. However, Medtronic's dividend hikes have been larger on a percentage basis than J&J's in recent years. If this trend continues, it won't be long before Medtronic has the more attractive yield.

Probably the best thing for investors to like about Medtronic is its moat. The company makes a wide array of medical devices and has strong relationships with hospitals and physicians. Medtronic also invests heavily in research and development for new products and partners with other companies (such as its collaboration with Mazor Robotics to market robotic surgical systems for spine and brain procedures). Like AbbVie and Johnson & Johnson, Medtronic appears to be a solid long-term pick for income-seeking investors.