The early numbers are in. Here are the companies that should worry, and those that should breathe a sigh of relief.

On Aug. 28, Amazon.com (AMZN -0.78%) officially took possession of Whole Foods Market. Then it planted its flag by immediately slashing prices on consumer staples such as bananas, avocados, salmon, eggs, apples, and kale.

As most investors probably know by now, grocery store stocks sold off hard in response and remain depressed, though general retailers Wal-Mart (WMT 0.73%) and Target (TGT 0.88%) have rebounded recently. Investors just aren't willing to pay the same multiples they once were in a pre-Amazon/Whole Foods era. 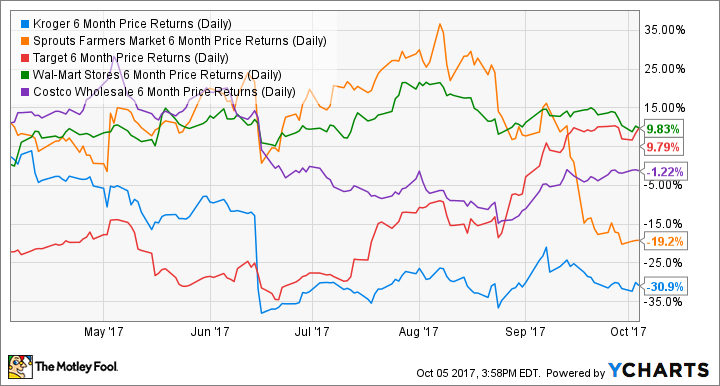 While many investors sold first and asked questions later, we now have some initial data points on the actual effect of the price cuts, courtesy of Thasos Research.  Founded at MIT in 2011, Thasos Research gathers mobile-phone location data to track customer behavior and claims to have the "largest repository of mobile phone data after Google and Apple." Here's what its initial research uncovered.

Thasos' research showed a 31% spike in Whole Foods foot traffic on the day of the price cuts, though the numbers soon dropped off to a mid-single-digit increase three weeks later. The high initial interest should be encouraging for Amazon. If Whole Foods is able to retain even a 5% increase in traffic merely based on a few targeted price cuts, that's significant.

At first glance, it may seem as though the Whole Foods cuts hurt the biggest grocers the most: Wal-Mart, Kroger (KR -0.44%), and Costco (COST 0.12%). Of the new shoppers who switched to Whole Foods in the first week, it is believed that 24% came from Wal-Mart, 16% from Kroger, and 15% from Costco. These were the highest numbers from any grocery chain.

However, a closer look reveals that these grocers were actually among the least affected. Since those companies have such large market share, defectors as a percentage their total customer bases were tiny. The most affected were the smaller, more upscale grocers, such as Trader Joe's (owned by private German grocer Aldi) and Sprouts Farmers Market (SFM -1.06%), as well as, to a lesser extent, Target, which has struggled with its own food initiatives. That means Whole Foods is hurting these other companies much more than it's hurting the bigger national grocers.

Bullish for Kroger and Wal-Mart?

The largest grocers that appeal to the widest demographic -- Wal-Mart and Kroger -- were the least affected, with less than one-half of 1% defecting, and with Kroger posting declining defection in each subsequent week.

That's because the study also revealed that defectors (a) were unlikely to drive the extra distance just to buy discounted organic food and (b) came mostly from Whole Foods' high-income demographic -- which is why Sprouts was overly affected and why Wal-Mart and Kroger were not.

Since Kroger has the most locations of any grocer in the U.S. and appeals to a wide range of customers, it makes sense that those looking for convenience would stick with their local Kroger brand. Moreover, price-sensitive customers who frequent Wal-Mart probably found Whole Foods' discounted prices still far too high.

As I wrote recently, I think the Whole Foods-Amazon combo will change the industry significantly, but it won't be the only company to thrive. I also like Kroger's beaten-down stock, as it's a well-run grocer with a large scale that should retain its broad demographic. The initial results from the Thasos study seem to confirm that thesis.

Of course, this study only encompasses three weeks of data, and as we all know, Amazon is both relentless and extremely innovative. Therefore, value investors taking a position in either Kroger or Wal-Mart should feel encouraged by Thasos's study -- but they should also keep their eyes and ears open for future developments.