Intuitive Surgical's (NASDAQ:ISRG) robots enjoy a near monopoly in hospitals, but that could change following last week's FDA approval of TransEnterix's (NYSEMKT:TRXC) Senhance. Senhance is a robotic system that assists surgeons performing laparoscopic surgeries. It offers advantages, including haptic feedback, that could differentiate it from Intuitive Surgical's da Vinci system. Will TransEnterix carve out a meaningful slice of this fast-growing market?

When the company launched in 2000, most surgeons shunned the concept of robotic surgery, preferring instead to rely upon the freehand surgical techniques they were taught. However, many of these surgeons have been won over by early adopters who have experienced success with the system and hospital administrators who are eager to boost procedure volume, reduce complications, and offer the latest in surgical technology.

The pace of adoption for robotic surgery isn't slowing, either.

Surgeons frequently use da Vinci in gynecological and prostate surgeries, and Intuitive Surgical is offering new instruments that allow da Vinci's use in colorectal and hernia procedures, too. Expanding da Vinci's addressable market has propelled procedure growth this year. In the third quarter, year-over-year procedures grew 16%, prompting Intuitive Surgical to boost its outlook for full-year procedure volume growth to between 14% to 15%.

Carving away at a multibillion market 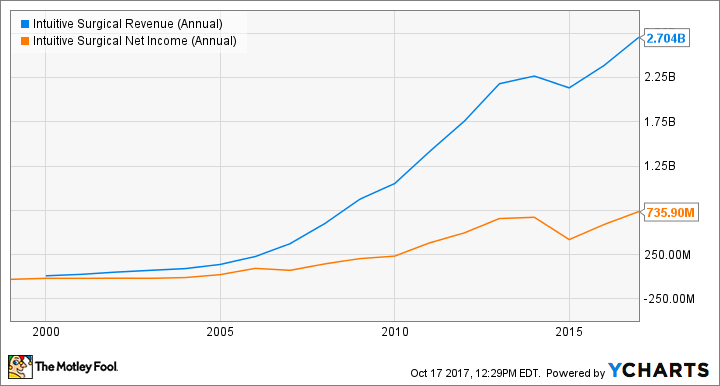 TransEnterix hopes Intuitive Surgical's success has paved the way for a market that can support more than one player. In 2015, TransEnterix bought the ALF-X system from SOFAR S.P.A. for $99.8 million, including $43.7 million in TransEnterix stock, and rebranded it as Senhance.

TransEnterix will try to win away market share by talking up Senhance features that are designed to mimic doctors' traditional surgical experience. Senhance's haptic feedback provides a similar feeling to what surgeons experience in freehand surgery, and Senhance's camera can be controlled by eye and head movements.

These features may help TransEnterix avoid pushback by surgeons who might otherwise object to using surgical robots, but to win over hospital administrators, TransEnterix will need to demonstrate that Senhance can save them money. Hospitals spend tens of thousands of dollars on da Vinci instruments and accessories, and since some Senhance instruments are reusable, the cost savings associated with them could give the company a valuable advantage.

Investors might want to temper some of their enthusiasm, because Senhance's success overseas has been limited. Through the first six months of 2017, TransEnterix only recorded two Senhance system sales and $3.5 million in revenue. For perspective, Intuitive Surgical placed 119 da Vinci systems outside the U.S. during the first six months of 2017, up 37% year over year. There are 698 da Vincis installed in Europe, plus another 538 systems installed in Asia.

Senhance performance overseas may indicate a similarly anemic adoption of it in America. Most of the hospitals that haven't bought a da Vinci system yet are cash-strapped, and those with more financial flexibility might not want to take a leap and buy a relatively unproven newcomer.

Furthermore, TransEnterix may find that its status as one of only two players in this market doesn't last long. Verb Surgical, a health technology company bankrolled by Alphabet and Johnson & Johnson, is working on surgical robots. Med-tech Goliath Medtronic (NYSE:MDT) is already making a big push into spine surgery via a partnership with Mazor Robotics (NASDAQ:MZOR), and it hopes to have a competing laparoscopic surgical system developed by the end of next year also.

TransEnterix's financial situation isn't overly encouraging, either. In its second-quarter filing with the SEC, management said "existing cash and cash equivalents, together with cash received from sales of our products, will not be sufficient to meet our anticipated cash needs through at least the next 12 months." That suggests management could have to tap equity investors for more money if sales don't ramp up quickly. Senhance approval triggers the expiration of warrants that add $25 million in cash to the coffers, but nonetheless, management only expects cash to last until late next year.

Given TransEnterix's challenges, the risk associated with buying its shares is high. Instead, investors might be better off waiting a couple of quarters to see if Senhance wins traction with buyers.