Please ensure Javascript is enabled for purposes of website accessibility
Log In Help Join The Motley Fool
Free Article Join Over 1 Million Premium Members And Get More In-Depth Stock Guidance and Research
By Rich Duprey - Oct 20, 2017 at 6:02AM

The warehouse club is hurrying to play catch-up in grocery delivery to keep from losing members.

Costco (COST 0.91%) never bought into the idea it was immune to the threat Amazon.com (AMZN 0.77%) poses, but since the e-commerce giant purchased Whole Foods Market, the warehouse club suddenly realizes it needs to do more if it wants to stay competitive.

Although the big-box retailer has long stressed the in-store experience for customers over what they could find online, that will be changing dramatically as Costco rolls out two new home-delivery offers for its members. CostcoGrocery will now offer two-day delivery on a selection of 500 shelf-stable products, with orders of $75 or more shipped free, and also an expansion of same-day delivery for some 1,700 fresh grocery items through Instacart.

With membership growth slowing, there is a real fear it could lose more of them to Amazon as it wades deeper into groceries, and to Wal-Mart (WMT -0.05%) as well, as it further enhances its online and grocery delivery options. 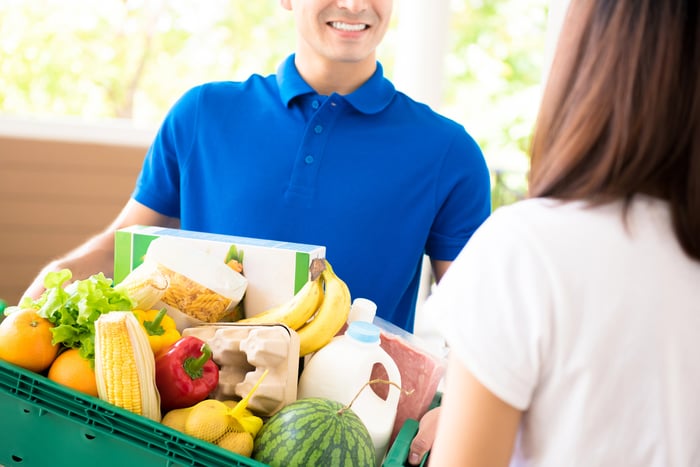 Upon Amazon's completion of the merger with Whole Foods, the e-commerce giant immediately announced it was cutting prices at the organic-foods supermarket, a move that created a stampede of customers who bought $500 million worth of goods in just the first week. Various analyses showed that traffic soared not only on Amazon's grocery website, where it added many of Whole Foods 365 store brand, but also at Whole Foods' physical locations.

According to the market researchers at Thasos Group, 15% of the new customers exploring the lower pricing initiative at Whole Foods came from Costco, putting it just behind Wal-Mart and Kroger (KR -0.15%). And because it's estimated that half of Costco members are also Amazon Prime members, the potential for customer defections could become more acute.

Equally problematic is Wal-Mart's increased focus on e-commerce. The retail king is looking for e-commerce sales to grow 40% next year, and it recently opened its 1,000th grocery pickup location. Just last week it also acquired Parcel, a same-day delivery service, and it's experimenting with in-fridge delivery, too. Not only will the retailer deliver your groceries to your door, but it will even put them away for you. (Amazon is looking at this, too.)

So where Wal-Mart has been bolstering its online capabilities for years, particularly in the grocery business, Costco has been late in coming to the realization that e-commerce and grocery are an increasingly important pairing. Its twin delivery decisions are the result of needing to play catch-up after years of benign neglect. The warehouse club might not have thought it was Amazon-proof, but in groceries it certainly thought it was resistant, which it believed was one of its competitive advantages.

That's no longer the case, and Costco has to confront the possibility that its initiatives will not only narrow profit margins but potentially reduce store traffic too. Costco CFO Richard Galanti seemed resigned to the notion that more e-commerce sales could cannibalize store sales, noting that "if we're going to lose [sales], we should lose it to ourselves." 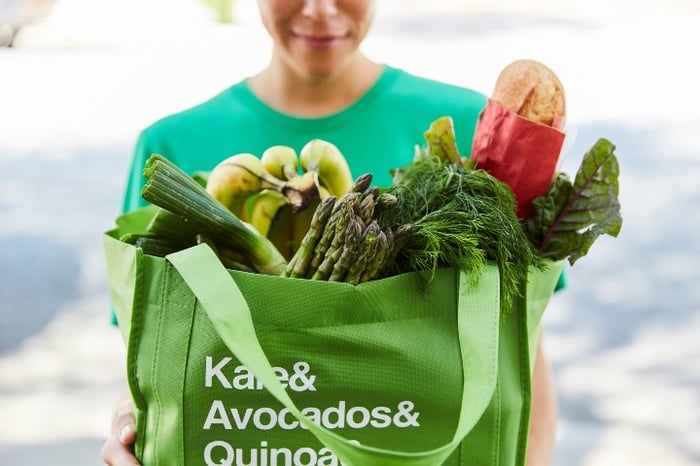 However, he does think it ultimately presents an opportunity to expand Costco's membership, since there are many places where a warehouse club doesn't exist with a several-hundred-mile radius.

While that may be true, it's clear Costco is on the defensive here. Having largely eschewed the online channel for its clubs -- one analyst noted that Costco's earnings call was the first time e-commerce had such a high priority -- it has been left flat-footed as its rivals raced by.

There's a reason Costco's stock was one of those most affected by Amazon.com's June announcement that it was buying Whole Foods, and with it and Wal-Mart both expanding their e-commerce grocery capabilities, Costco's response may turn out to be a case of too little, too late.