But the company's revenue of $19.15 billion beat analyst expectations by a significant $550 million. To be sure, this figure was still down year-over-year, but only by 0.4%, suggesting a bottoming of IBM's revenue trajectory, and the possibility of the long-awaited-for return to growth, the lack of which has vexed impatient investors over the past few years. So what's behind the positive numbers, and are they for real? 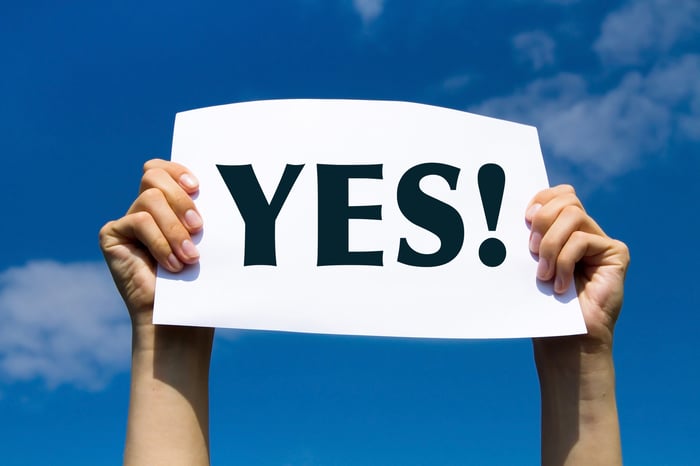 As you can see from the chart below, IBM's revenue and profit metrics appear to be on a steady decline; however, you can also see that the trend is moderating. This quarter's year-over-year revenue decline of (0.4%) marked a sequential improvement from last quarter's (3%) revenue decline. 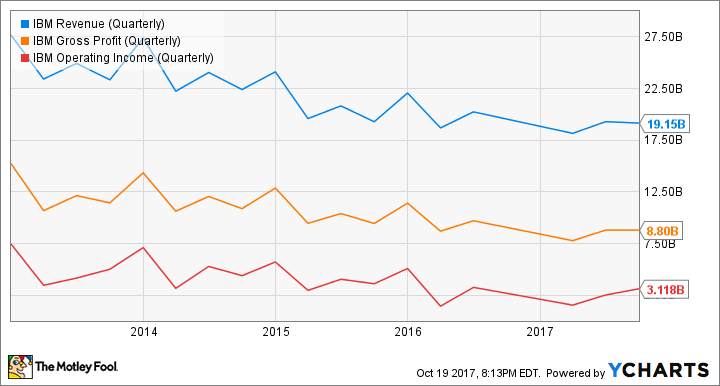 Within that steady decline is a lot of noise, including a rapid decline of IBM's legacy businesses such as on-premise hardware and software, as well as some commoditized services; however, this is being offset by rapid growth in "Strategic Imperatives" of cloud, analytics, mobile, social, and security.

These strategic imperatives showed impressive growth, as you can see here:

All told, strategic imperatives as a whole grew 10% year-over-year, a marked improvement over the second quarter's 5% growth (7% adjusted for currency). They now make up 45% of IBM's revenue, up from 43% in Q2.   Each segment displayed strong growth, with an acceleration in the largest segments of analytics and cloud.  As the company is moving more toward a software-as-a-service model, the company should experience increasing margins as these businesses grow.

Another particular standout was IBM's new mainframe computer, the z14 system, which was only released for the last two weeks of September. Mainframes are the refrigerator-sized supercomputers that the world's biggest businesses use for processing their most sensitive transactions and data. While many businesses are switching these functions to the public cloud, companies with extremely sensitive data such as banks and airlines still do much of this in private data centers.

The new mainframe from IBM has full encryption capabilities without human intervention and without a degradation in performance, and the company saw strong demand for the new product. Cybersecurity is front and center these days, as many high-profile attacks have occurred this year, with 1.9 billion data records being compromised so far in 2017 -- a stunning 164% over 2016. Even more distressing is that 2016 saw a 556% increase in compromised records over 2015!

Only 4% of enterprise data had been encrypted up until now, often due to the cost and performance requirements to encrypt data end-to-end. The new mainframe appears to have unique capabilities, which means IBM should at least retain its competitive position in the most highly sensitive business operations.

And while the mainframe is a cyclical business, much of the software and security subscription features that go with it are not, as CFO Martin Schroeter explained on the conference call. That is why the new mainframe could give a more lasting boost -- or at least a stabilization -- to IBM's revenues.

This mainframe is also the computing power behind some of IBM's biggest bets, including blockchain and Watson, each of which also showed promise in the quarter. Watson Health grew double-digit, while Watson Financial Services also noted posted strong growth -- likely the effect of 2016's acquisition of Promontory Financial Group. On the blockchain front, IBM also touted a new food safety blockchain initiative with leading food retailers, as well as a new partnership with global banks to pursue regulated cross-border blockchain transactions.

IBM posted a great quarter that benefited from investments made in the tough past few years. If the current business is stabilizing, investors get to own a reasonably priced, cash-generative business and a 3.75% dividend, with a free option on many of the company's moonshots. To me, that seems like a great risk-reward, even after the post-earnings surge.

Has IBM Finally Turned Itself Around? @themotleyfool #stocks $IBM Next Article
Current