It's hard to argue with buy-and-hold investing. The low-stress investment strategy is a great way to watch your money grow, as long as you pick companies with promising futures ahead of them. While you should always monitor your holdings, approaching your investments with a long-term mindset can help you look past the short-term dips you'll encounter with almost any stock.

Growth stocks work perfectly with this kind of strategy, and some of the best-known winners over the last generation like Amazon and Netflix have delivered outstanding returns despite occasional setbacks. If you're looking for another growth stock that you can buy and hold for the next generation, keep reading to see why our analysts recommend Alphabet (NASDAQ:GOOG) (NASDAQ:GOOGL), Air Lease Corporation (NYSE:AL), and Match Group (NASDAQ:MTCH). 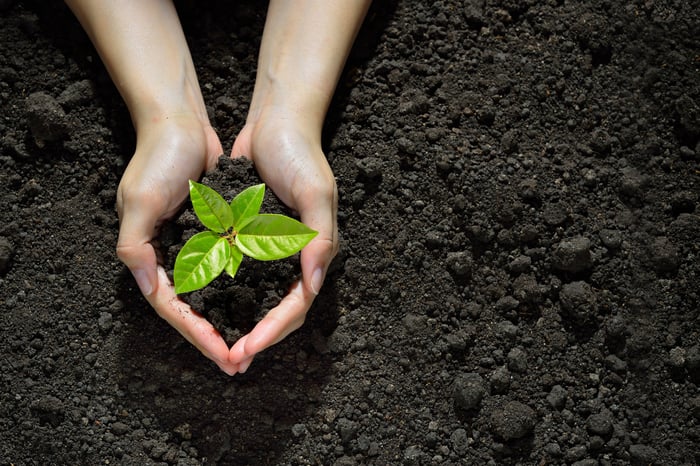 The search for growth is over

Danny Vena (Alphabet): Alphabet's claim to fame is its ubiquitous search, and while that still accounts for the majority of its income, several other initiatives will likely be growth drivers for the next quarter of a century.

Artificial intelligence (AI) is creating significant buzz in the tech world, and many companies are now jumping on board. Google was a pioneer in AI, beginning its research back in 2011, and its work has resulted in groundbreaking developments across a broad spectrum.

Alphabet uses AI to control power usage at its sprawling data centers, achieving a 15% reduction in energy usage, saving hundreds of millions of dollars. AI can help more accurately target its online advertising and predict the click-through rate, where even small accuracy improvements can yield hundreds of millions of dollars in additional revenue.

AI also has enormous potential to revolutionize healthcare. Alphabet created an AI system that could identify tumors in medical images with a greater degree of accuracy than human pathologists. A similar system could detect damage to the retina caused by diabetes as accurately as ophthalmologists, which are currently in short supply.

Waymo, the company's AI-based self-driving car initiative, was launched in 2009 and is now widely considered the most advanced autonomous driving system worldwide. Consumer tests are ongoing and some analysts have valued the self-driving unit at $70 billion.

In the third quarter, Alphabet's revenue grew to $27.7 billion, up 24% year over year. Advertising generated 87% of that, but AI will likely become a more dominant income-producer in the future.

Daniel Miller (Air Lease Corp): Investors looking for a growth stock to buy and hold for more than two decades could hitch a ride with Air Lease Corp, a U.S.-based aircraft leasing company that derives revenue from the leasing of narrow- and wide-bodied commercial jet aircraft.

The company has performed well in recent years. Its assets have grown at an 18% compound annual growth rate (CAGR) from 2012 through 2016. Over the same time period, revenue and adjusted net income CAGR checked in at 21% and 25%, respectively. Its solid performance should continue in the decades ahead, as Boeing predicts that between 2016 and 2035 the world will require 39,620 commercial aircraft valued at more than $5.9 trillion. Better yet, ALC's primary market -- single aisle, small and medium wide-body -- will account for about $5.6 trillion of that total pie.

To invest in ALC over the next 25 years requires investors to believe one thing: that leasing offers a compelling option for ALC customers. Leasing helps those customers use less cash and financing for their purchases, helps with fleet flexibility, and eliminates residual value risk of the aircraft. Leasing has been on the rise, and if that continues ALC could be a savvy long-term investment to capitalize on ballooning global demand for commercial aircraft.

Jeremy Bowman (Match Group): Fresh off a strong earnings report, Match Group in many ways looks like a growth stock that could deliver strong returns over the next generation. The company is the world's biggest online dating company, and owns a broad portfolio of brands including Match.com, OkCupid, PlentyofFish, and Tinder.  The search for love and relationships is as timeless as any other human need, and the company has changed the way that people look for romance. As technology and connectivity improve around the world, international growth should surge. In the most recent quarter, international paid members jumped 33%, and the company is just beginning to unlock revenue streams from Tinder with the recent addition of Tinder Gold.

Advertising is another opportunity that Match Group has barely tapped, as it makes up just a small percentage of revenue today. Considering that users spend an average of 90 minutes a day on Tinder and the company has a wealth of user data, Match could develop an advertising business similar to that of social media companies.

Finally, its business model is highly scalable and profitable, delivering an operating margin of 27% over the last year. That should only expand as the company adds more paid members. With a market cap of $8 billion, there's plenty of room for the company to grow over the next 25 years.