Fitness tracker company Fitbit (NYSE:FIT) announced a partnership with adidas (OTC:ADDY.Y) as part of its Ionic smartwatch launch in September, promising a device and training programs next year that enhance Fitbit's personalized coaching software with adidas' expertise. While that seems like a no-brainer, the bigger reason behind Fitbit's desire to partner with adidas is related to China. Quite simply, adidas has been successful in China, and Fitbit hasn't.

Fitbit management doesn't mention China on its earnings calls or in its financial filings unless an analyst asks a question about the region. The most recent mention of China on an earnings call was in the final quarter of 2016 when James Park, Fitbit's CEO, said "...we have yet to gain much traction in large markets like China..."

Fitbit includes its revenue for the Chinese market in its Asia Pacific (APAC) region. In the second quarter, despite growing at 46% year-over-year, the region totaled a mere $21 million, or 5.9% of total revenue. Half of the APAC revenue comes from Australia, so China revenue contribution is small in comparison to the opportunity, and investors are not even sure how small it really is.

The challenge for Fitbit in China is that it is stuck between a popular low-cost tracker manufacturing company, Xiaomi, and high-end smartwatch maker Apple. Xiaomi is located in China and its trackers are priced in the $25 range, which makes even Fitbit's entry model for $59 look high-priced. At the high end, Fitbit is hard-pressed to compete with Apple's monster brand power that generated $48 billion from the greater China region in its fiscal 2016.

This is where the adidas partnership is critical for Fitbit. 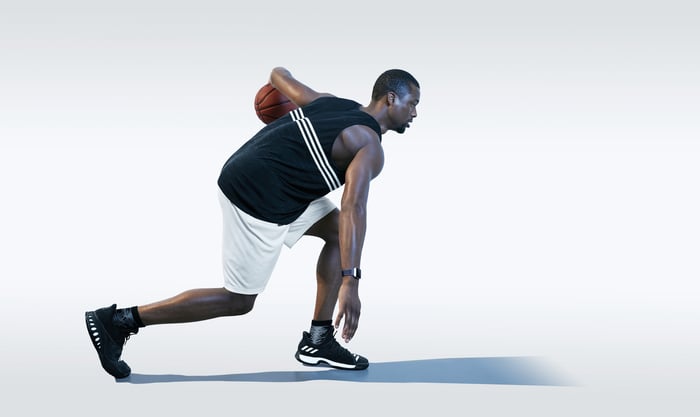 Adidas to the rescue?

The idea of Fitbit partnering with another company has been around for a while. In February of this year, Park said, "So one thing that we're going to do is look at more of a partnership model in some of these Asian countries versus trying to develop that market all on our own." In an interview in September, Chief Financial Officer Bill Zerella confirmed that Fitbit is hoping the adidas partnership will help the company in the Chinese market.

But that brand [adidas] is a very big health and fitness-focused brand. So we're really excited about the opportunity that may give us because we frankly have really not been able to make any headway in China of any significance.

Zerella went on to explain that there are "about 10,000 adidas stores in China. About 200 are company owned, the rest are actual franchises." Adidas does have a strong following in China and the brand collected $3.5 billion revenue in fiscal 2016 from the greater China region and posted 28% currency neutral revenue growth year over year.

While a great reason for the partnership is for Fitbit to gain a foothold in China, the announced reason of enhancing Fitbit's coaching offering makes a lot of sense, too.

As part of the smartwatch launch, the company revamped its Fitstar exercise app and rebranded it as Fitbit Coach. The company feels that its coaching and guidance features are an important differentiator from a low-end "tracker" that just keeps a log of steps and other fitness metrics. Along with this news, Fitbit announced the partnership with adidas for a special edition watch and training programs starting in 2018. The announcement explained the partnership this way.

This relationship will leverage adidas' robust performance program expertise with Fitbit data and insights from millions of global users to help athletes of all levels perform better, play better and feel better.

This is a great extension to Fitbit's coaching features and gives Fitbit additional fitness cred, bringing in more customers.

Riding the coattails of adidas' success seems like a great step for Fitbit, but the devil is in the details. Hopefully, Fitbit will leave the marketing and sales planning to adidas and focus on what it does best, integrating hardware and software to deliver a differentiated customer experience. Even Zerella, though excited about the opportunity, ended his explanation about its challenges in the region with, "We'll see how it plays out over time."

I'm with the CFO on this one. Investors should watch if this can be the key that ignites Fitbit's growth in China.