In October, America's largest bank, JPMorgan Chase & Co. (NYSE:JPM), made a massive acquisition in the financial technology space when it paid an undisclosed sum to acquire WePay. WePay offers payment solutions that provide an ecosystem for customers to use that allow them to seamlessly integrate the ability to make payments into their own services. The company counts businesses like GoFundMe, Meetup, and Webconnex among its clients. For example, it allows GoFundMe to extend payment options to each of its platform users to enable them to accept payments within their own personal fundraising campaigns.

According to the press release, the country's largest bank has several plans for its newest and shiniest fintech toy, not the least of which is to act as its "payments innovation incubator in Silicon Valley." Chase will now be able to offer several more payment capabilities to its 4 million small business customers, including the ability to accept card and digital payments almost instantly. 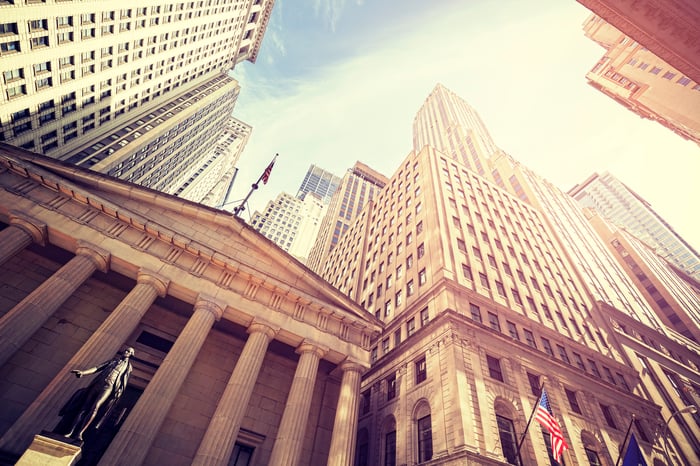 JPMorgan Chase intends to keep WePay as a stand-alone business while leveraging its 4 million small business customers as a new distribution arm for its services, according to Chase Commerce Solutions CEO Matt Kane. Bill Clerico, the CEO and founder of WePay, echoed this sentiment in the press release, "We're excited to marry the distribution of one of the world's largest and most respected financial institutions with the best technology and talent in Silicon Valley."

While the amount JPMorgan Chase paid for the acquisition was undisclosed, the Wall Street Journal reported (link requires subscription) it was more than $220 million, the valuation WePay achieved in its latest round of funding in 2015.

What this means for JPMorgan Chase

America's biggest bank features an extremely lucrative commercial banking division that reported record revenue of $2.1 billion, a 15% year-over-year increase, and net income of $881 million, good for 13% annual growth. In the company's third-quarter conference call, transcribed by S&P Global Market Intelligence, CFO Marianne Lake called out the huge success this division was seeing and credited the resources the bank had poured into this part of the business:

"Another excellent quarter in this business with net income of $881 million, with record revenue and an ROE of 17%. And although we recognize that our results are affected by a benign credit environment, the performance is very strong and broad-based and is driven by the investments we've been making in the business, the differentiated platform capabilities we can offer our clients and our commitment to business discipline."

With the acquisition of WePay, the company's commercial banking operation will be able to offer even more "differentiated" capabilities to its customers, and, as a result, will probably see even more growth.

The Chase for fintech

Fintech is an abbreviated form of financial technology and refers to the use of technology to better accomplish traditional financial services. When fintech works, it usually means these financial services can be obtained for a cheaper price and at a greater convenience to the consumer. The end result for millions of consumers is that nimble tech companies have begun to displace banks and credit unions. For instance, think of PayPal Holdings and its 218 million active account holders that use their PayPal accounts to hold balances, make online purchases, and for P2P payments.

While this trend has been apparent for years, it seems to be accelerating. In the past couple of months, Square applied for a bank charter in Utah. More recently, First Data Corp and Live Oak Bancshares launched a joint venture, Apiture, designed to help smaller banks and credit unions offer all the bells and whistles on their websites and mobile apps that larger banks do.

Are big banks nimble enough to fight back? Well, with JPMorgan's WePay acquisition, the country's biggest bank is signifying it understands the threat fintech poses and is following the adage, "If you can't beat 'em, join 'em." For investors, more than the new small business customers and boost to earnings this will likely produce for JPMorgan, it's the attitude of embracing the future that should be most heartening.