Of course, "best" can mean different things to different people. But with stocks, there are key metrics that can be used to determine which are better than others. And if one stock clearly dominates in several of those metrics, it has a strong argument in being named as the best.

AbbVie (NYSE:ABBV) is such a stock. On the measurements that count the most for investors, it outperforms every other major drugmaker in its peer group. Here are three indisputable reasons why AbbVie ranks as the best big pharma stock on the market right now. 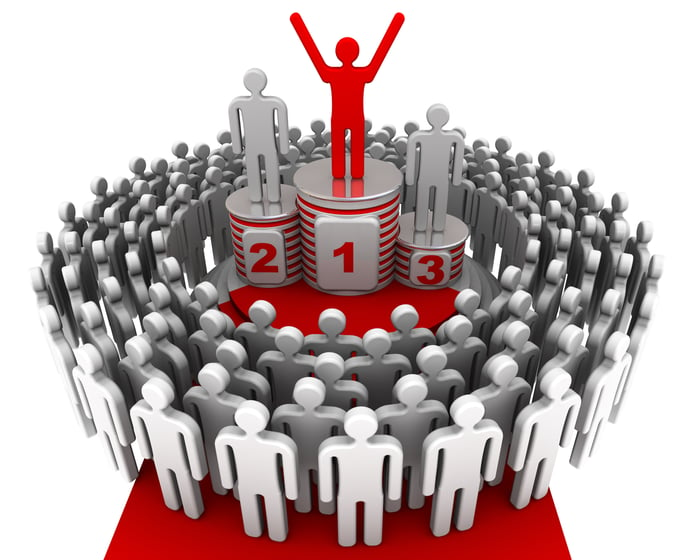 Over the last three years, AbbVie's total shareholder return of more than 65% beats every other big pharma. The next closest rival in the group of drugmakers in AbbVie's peer group is Johnson & Johnson (NYSE:JNJ), with a three-year total return of close to 40%.

There are two components to total shareholder return: stock appreciation and dividends. AbbVie has delivered on both.

As you might expect, impressive total shareholder returns is accompanied by strong revenue growth. AbbVie has increased its trailing-12-month revenue over the last three years by nearly 37%. That's top among the companies it views as its peers. Bristol-Myers Squibb came in second during the period, with close to 30% trailing-12-month revenue growth.

Humira was the primary driver for AbbVie's impressive revenue growth. The autoimmune disease drug generates roughly two-thirds of AbbVie's total revenue. The company does have other rising stars, though, particularly Imbruvica. The drug, which AbbVie co-markets with Johnson & Johnson, is projected to rank among the top five best-selling cancer drugs in the world by 2022.

With revenue increasing rapidly, it isn't surprising that AbbVie's bottom line has also improved significantly. Over the last three years (including estimated full-year earnings for 2017), AbbVie's adjusted earnings per share (EPS) have grown by 29%. Again, the company takes the No. 1 spot.

We can't compare AbbVie against its peers over a five-year period, because the company didn't report adjusted earnings per share in 2012 for use in calculations. Also, AbbVie ranks second in its peer group for estimated adjusted EPS growth in 2017.

There is one thing worth noting. AbbVie's self-defined peer group of big pharma companies includes the ones already mentioned -- J&J, AstraZeneca, Bristol-Myers Squibb, and Gilead Sciences -- plus Amgen, Eli Lilly, GlaxoSmithKline, Merck, Novartis, and Pfizer. But AbbVie left Celgene (NASDAQ:CELG) off its list of peers. Celgene's current market cap is in the same ballpark as AstraZeneca's and was greater than several of AbbVie's peers for much of the last year.

If Celgene were included in the comparisons, AbbVie would come in behind the biotech in revenue growth over the last three years, five years, and 2017 year to date. Also, for most of 2017, Celgene outperformed AbbVie in total shareholder return. A big pipeline disappointment and third-quarter revenue miss caused Celgene's stock price to sink, giving AbbVie the edge in total return this year.

Still, AbbVie clearly leads all other big pharma stocks in total return and adjusted EPS growth. It beats its peer group in revenue growth as well, although it would come in second if that list included Celgene. Even with Celgene in the comparisons, it seems indisputable that AbbVie is the best big pharma stock -- at least for the moment.