Please ensure Javascript is enabled for purposes of website accessibility
Free Article Join Over 1 Million Premium Members And Get More In-Depth Stock Guidance and Research
By John Ballard - Nov 22, 2017 at 7:03AM

Read what NVIDIA CEO Jensen Huang had to say this month about important growth markets.

Here are four quotes from NVIDIA's CEO Jensen Huang on the company's latest conference call with analysts that reveal how he sees these markets playing out in the near future. 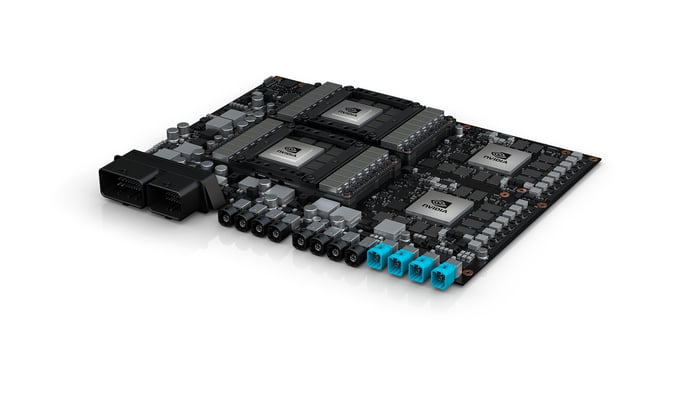 The gaming segment is positioned to have a great holiday quarter

Gaming is one of the fastest-growing entertainment industries, and we are well positioned for the holidays.

When there are quality games releasing from the biggest game publishers, it tends to encourage gamers with outdated graphics cards to upgrade. Already this fall, several big games have released from the biggest video game makers. To take advantage, NVIDIA just released the new GeForce GTX 1070 Ti graphics card to fill out what was already a strong offering for PC gamers heading into the holidays.

NVIDIA has been seeing strong growth in its gaming segment since it launched its Pascal-based graphics cards over a year ago. That momentum continued in the recent quarter, with gaming segment revenue increasing 25% year over year. Despite the fast-growing data center segment, the gaming segment is still NVIDIA's largest, totaling 57% of trailing-12-month revenue, and 59% for the fiscal third quarter.

Artificial intelligence is becoming increasingly widespread in many industries throughout the world, and we're hoping to lead the way with all major cloud providers and computer makers moving to deploy Volta.

NVIDIA's data center business continued to experience robust demand, with revenue growth of 102% year over year. Huang is touting the new Volta chip design as "the most energy-efficient form of computing that the world has ever known."

Volta surpasses NVIDIA's previous Pascal generation in performance and power-efficiency. It brings 10 times greater performance for deep learning applications over previous generation chips, and it requires about the same level of power to run as NVIDIA's flagship GeForce GTX 1080 Ti chip for gaming.

NVIDIA has been ramping Volta over the last few quarters, and the world's biggest cloud providers are on board, including Amazon.com, Microsoft , Baidu, Alibaba Group Holding, and Tencent Holdings.

Automotive segment should hit the ground running in a few years

We're building the future of autonomous driving. We expect robotaxis, using our technology, to hit the road in just a couple of years.

NVIDIA's automotive segment posted revenue growth of 13% year over year in the quarter. The graphics specialist introduced DRIVE PX Pegasus in the third quarter, which packs the power of 320 trillion operations per second. That's enough processing power to enable level 5, fully autonomous vehicles, which are expected to hit the road as early as 2021.

The automotive segment is not growing nearly as fast as data center, and it only makes up 6% of total revenue, but make no mistake, automotive represents a massive opportunity for NVIDIA. Management pegs its addressable market at $8 billion, which is almost equal to NVIDIA's trailing-12-month revenue of $8.976 billion. And NVIDIA has already partnered with major automakers all over the world to make this opportunity a reality.

The cryptocurrency market has been a small area of surprise for NVIDIA lately. Here's what Huang had to say about how to think about this market over the longer term:

There will be new currencies emerging. Existing currencies will grow in value. The interest in mining these new emerging currency crypto algorithms [is] ... going to continue to happen. And so I think for some time, we're going to see that crypto will be a ... small but not zero part of our business.

In the fiscal second quarter, management reported that mining demand generated $150 million in revenue. In the third quarter, cryptocurrency-related revenue was about $70 million. These numbers are based on revenue for NVIDIA's dedicated crypto-boards, but management reported that there is crypto-mining demand that is blended across different revenue categories, so it's difficult to quantify the exact amount of revenue coming from crypto-miners.

Another interesting market to watch is NVIDIA's Tegra processor business, in which the graphics maker designed a custom Tegra chip to power the hot-selling Nintendo Switch console. Tegra processor revenue increased 74% in Q3 to $419 million. Keep in mind, this category also includes revenue from NVIDIA's DRIVE PX chip for self-driving cars. Nonetheless, Switch is a major component of Tegra revenue and was a contributor to growth in the third quarter. This should continue as Switch has been a strong seller in 2017 and sales are gaining momentum heading into the holidays.

NVIDIA's largest segments are enjoying nice tailwinds, and smaller opportunities like cryptocurrency and Nintendo Switch are padding quarterly results. The stock is sitting at all-time highs sporting a forward P/E ratio of 46 times earnings, but if NVIDIA can keep turning in results like this, the stock should continue to be a good investment for many years.