Starting a business is hard, and keeping it running is not easy either -- only half of all businesses survive five years. E-commerce platform company Shopify (NYSE:SHOP) wants to change all of that.

The company is focused on "reducing the learning curve" to start a business, and as a result, it is increasing the number of entrepreneurs. Recent data from Shopify suggests its merchants aren't just tech-savvy early adopters; it seems the company is succeeding on all fronts.

The path to more entrepreneurs

Tobi Lutke, Shopify's CEO, was interviewed by The Motley Fool's co-founder, Tom Gardner and talked about how the company is working to create more entrepreneurs.

We are going to be very focused on further reducing the learning curve that people have to go through for building businesses, because every single time we reduce the learning curve, it makes more entrepreneurs.

Lutke kicked off its Unite conference for partners and developers earlier this year where he said that it was his personal mission to "build a path that leads to more entrepreneurs."  Lutke stated this has been his goal since he made his first snowboard sale on his e-commerce website. He explained the details of the moment when he received the automated email of his first e-commerce sale. It was a life-changing event for him because he knew that from then on he would be known as an entrepreneur.

On the company's most recent earnings call, Lutke explained that now more than ever, it's a great time to be an entrepreneur, and went on to explain why. First, consumers are moving toward retailers who offer experiential shopping and a personal touch. Second, quality manufacturers are available to entrepreneurs without a significant capital investment. Last, advances in supply chain technology enable small business owners to hold less inventory, and in some cases, no inventory. Lutke summed up that the advantage is favoring the small business owner.

The winning formula for retail is now an asset-light infrastructure, combined with a highly personalized, interactive consumer experience.

These macro trends and Shopify's efforts to reduce the learning curve for entrepreneurs may be contributors to why more businesses are getting started. 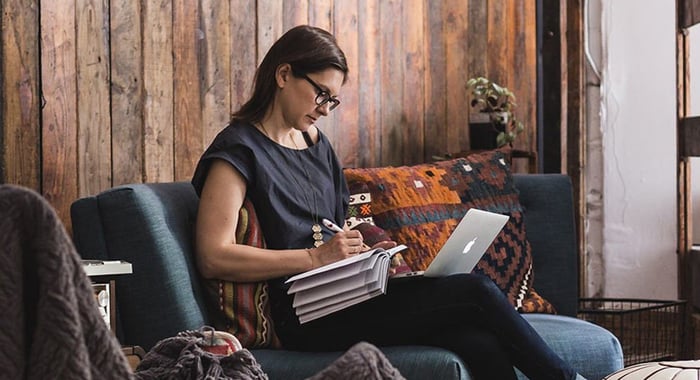 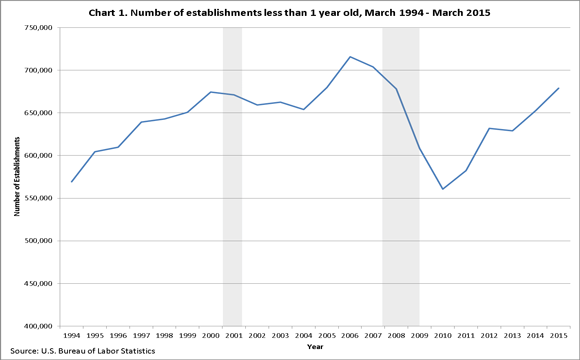 The BLS also reported on "births" through that same time period and in the last four quarters that were reported, over 900,000 new businesses were created. 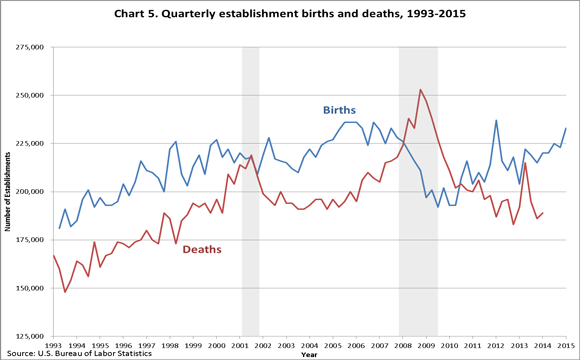 While that seems like a huge number, the SBA reported that in 2014 small businesses in the U.S. (less than 500 employees) totaled 29.6 million, so the number created is just a small portion of the total.

While the U.S. government hasn't reported new business growth since March 2015, Shopify shared some insights on its merchants in the last several years at the April 2017 Unite conference.

Thornton concluded that the Shopify merchant base has moved beyond the early adopter market and more "closely resembles the general population." This trend couldn't have happened without Shopify's efforts to "flatten the learning curve" for its merchants. These efforts include a focus on developing what merchants need most and using its huge trove of data to pinpoint where merchants "get stuck" so that it can provide tools and programs to help.

Shopify is passionate about serving the small business owner. In the last earnings call Lutke talked about how the company could focus on large businesses with big budgets, but he chose not to.

Lutke proudly talks about how a merchant has their first sale on the Shopify platform every 90 seconds. That works out to more than 350,000 new entrepreneurs every year. With those kinds of numbers, it seems that Lutke is fulfilling his mission.