People who invest in bitcoin would be excused for disliking Jamie Dimon, the chairman and CEO of JPMorgan Chase (NYSE:JPM), who called the crytocurrency a "fraud" earlier this year and intimated that people who buy it are "stupid."

It wasn't the best choice of words, if for no other reason than that it makes anyone who would benefit from his advice less inclined to listen to it. But if you look at bitcoin's price today, and consider Dimon's experience at the head of one of the world's most revered financial institutions, you would be doing yourself a disservice to ignore his general sentiment. 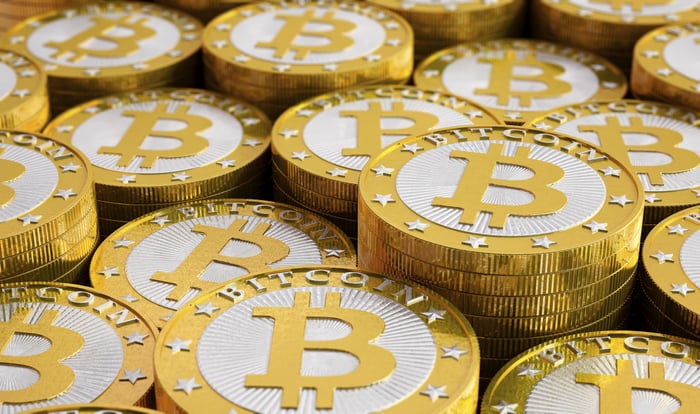 Does this mean that bitcoin isn't a good investment? Not necessarily, but buyers should go into it with their eyes wide open about the risks involved in buying it at today's price.

Since the beginning of this year, bitcoin prices have climbed by a factor of eight, going from $998 per bitcoin at the beginning of January up to $8,255 today. Regardless of what type of asset you're talking about, that's an incredibly rapid ascent that shouldn't be ignored by anyone thinking about buying bitcoin today.

Just on the surface, bitcoin looks like a bubble -- though, of course, the problem with calling anything a bubble, is that you don't know if you're in one until it has popped and it is thus too late. Add in the fact that bitcoin has no intrinsic value, sharing more in common with tulips than real estate, and the volume of one's alarm bells should increase in decibels.

None of this is to say that bitcoin won't climb from here. It could continue in the current direction for another year. Or two years. Or three years. Or it could crash next week. Or it could plateau and stay at its current price, though this option seems the least likely. One way to think about bitcoin is that it is a way to short other currencies. When people buy bitcoin, they buy it with dollars or some other currency. This reduces demand for traditional currencies, shifting it to bitcoin. And because a currency's value operates in a similar fashion to any other type of commodity, when demand falls, so too will the price.

Consider this analysis from Howard Marks, the co-chairman of Oaktree Capital Group (NYSE:OAK) and one of the country's most astute investors:

Specifically, the U.S. money supply is almost $14 trillion, so if people and businesses decide to hold just one-third of their wealth in Bitcoin rather than dollars, (and who wouldn't want to do so given all the advantages described above?), the value of the Bitcoin in circulation will rise to $4.5 trillion, from today's $73 billion, for a gain of roughly 60x.

Marks wasn't citing this as evidence that bitcoin is a good investment. Instead, it is as an example of "'lottery-ticket thinking,' under which it seems smart to bet on an improbable outcome that offers a huge potential payoff."

Again, none of this is to say that bitcoin won't continue heading higher. If you think about what's going on in the world right now, in fact, you may be tempted to short the major world currencies. Politics in the United States and Europe are particularly volatile right now, with other financiers such as the head of JPMorgan Chase's investment bank, speculating that asset markets could soon experience a shock, which could hit everything from currencies to stocks, bonds, and real estate.

If that were to happen, it's tempting to think that bitcoin would behave similarly to gold -- to act as a hedge, that is, by gaining in value as turmoil and volatility infects other asset classes. But the fact of the matter is that we don't know how bitcoin would respond in that situation. The data doesn't go back far enough to even determine how it performed in the financial crisis of 2008.

The point being, the market for bitcoin is uncharted territory. Anybody who says it will continue to go up, or that it is about to fall, shouldn't be listened to. That's noise, not signal.

But for people with an interest in cryptocurrencies and a high risk tolerance, I have to admit that I understand why they'd be interested in putting some skin in the game, if only to learn more about it.