2017 has been a banner year for Wal-Mart Stores Inc. (NYSE:WMT). The retail giant, which was considered a dinosaur not long ago, has seen its stock jump 40% this year, besting nearly every other retailer.

Going into 2018, expectations for the company are high, shares are at an all-time peak, and its valuation is higher than it's been in a decade at a P/E ratio of 23.

Let's take a look at what investors can expect from the company going into next year and if it can keep up its current momentum. 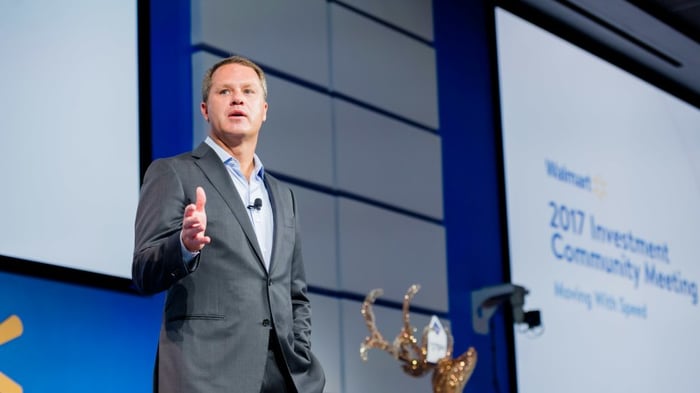 Every year in October at its annual investor meeting, Wal-Mart offers a transparent outlook on the year ahead, giving investors an uncommon level of insight into the direction of the business. This year Wal-Mart announced the following:

Wal-Mart also said it would spend about $11 billion on capital expenditures, and, like in recent years, it will prioritize store remodels and digital channels over opening new stores. Management said it would open fewer than 15 Supercenters and 10 Neighborhood Markets, but still aggressively expand abroad with 255 new stores, focusing on markets like Mexico and China.

Investors clearly approved of the plan, as Wal-Mart shares rose 4.5% that day.

Beyond the specific goals outlined in the presentation, investors can expect some other moves from Wal-Mart. In many ways, the company's strategy for 2018 seems like it will be nearly identical to what investors have seen this year. That means in addition to investing in e-commerce and initiatives like online grocery pickup, the company will make further moves out of Marc Lore's playbook.

Since Wal-Mart acquired Jet.com last year for $3.3 billion, bringing on Jet founder Lore to head its e-commerce operations, Lore has aggressively pursued other digitally native brands. In the past year, Wal-Mart has acquired ShoeBuy, Moosejaw, ModCloth, and Bonobos, and Lore plans to cultivate a higher-end customer that has traditionally avoided Wal-Mart. Over the next year, expect the company to continue to integrate those brands into Jet.com and to pursue similar acquisitions.

Likewise, Lore has been experimenting with ways to leverage Wal-Mart's store base to give it an advantage over online rivals like Amazon. Under his guidance, Wal-Mart launched free two-day shipping for orders over $35 to compete with Amazon Prime and introduced a program called Pickup Discount, which offers customers savings on online-only products if they pick them up directly from a store. More recently, the company has started charging a lower price for some everyday items if customers pick them up in store. The intent behind Lore's experiments is clear -- to tie the expense of shipping more directly to the customer to incentivize them to come into the store so they can save money and Wal-Mart's bottom line can grow.

The rampant growth Wal-Mart and its shareholders enjoyed through much of its history will probably never return as the need for massive store expansion has passed, but Wal-Mart is in a stronger position than it's been since at least the recession thanks to its acquisition of Jet.com and smart investments in improving stores.

I wouldn't expect another 40% rise in the share price next year; earnings would have to greatly outperform the 5% growth guidance in order for the stock to climb like that. But the company is finally reasserting itself and regaining important competitive advantages through its store network and scale.

With strong growth in e-commerce expected and continuing store-based comparable sales growth, 2018 should be another strong year for the retail behemoth.